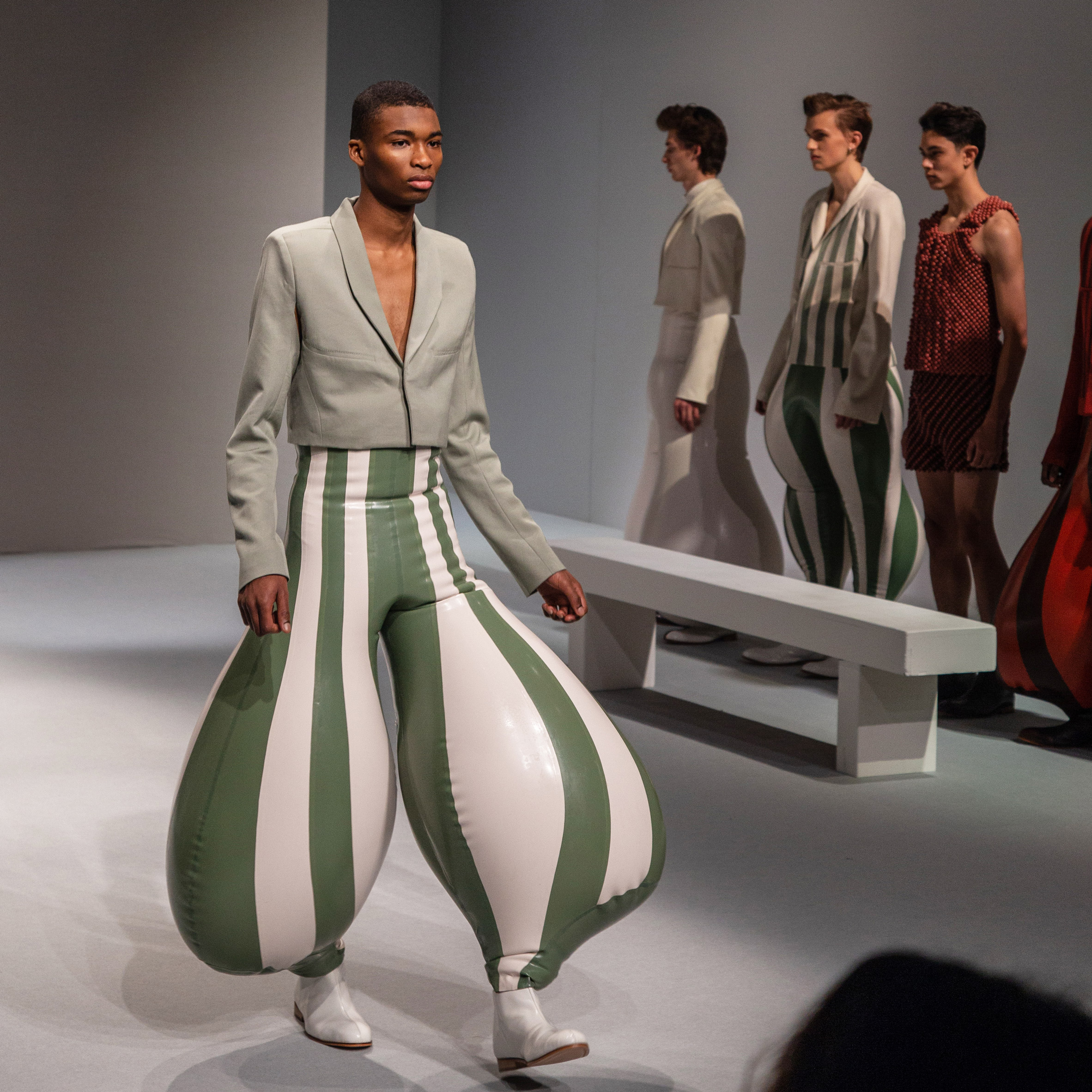 For his graduate collection at the London College of Fashion, menswear designer Harikrishnan has matched cropped tailored jackets with billowing latex trousers to create exaggerated silhouettes.

The super-wide inflatable trousers consist of up to 30 individual latex panels, which are either plain white or arranged in contrasting colour blocks of brick red and forest or mint green.

Although they fit snugly at the waist, they balloon out to double the width of the wearer around the thighs, before finally tapering in again towards the ankles.

This look is achieved by pumping the trousers with air via a seven millimetre-wide inflation valve at the bottom. 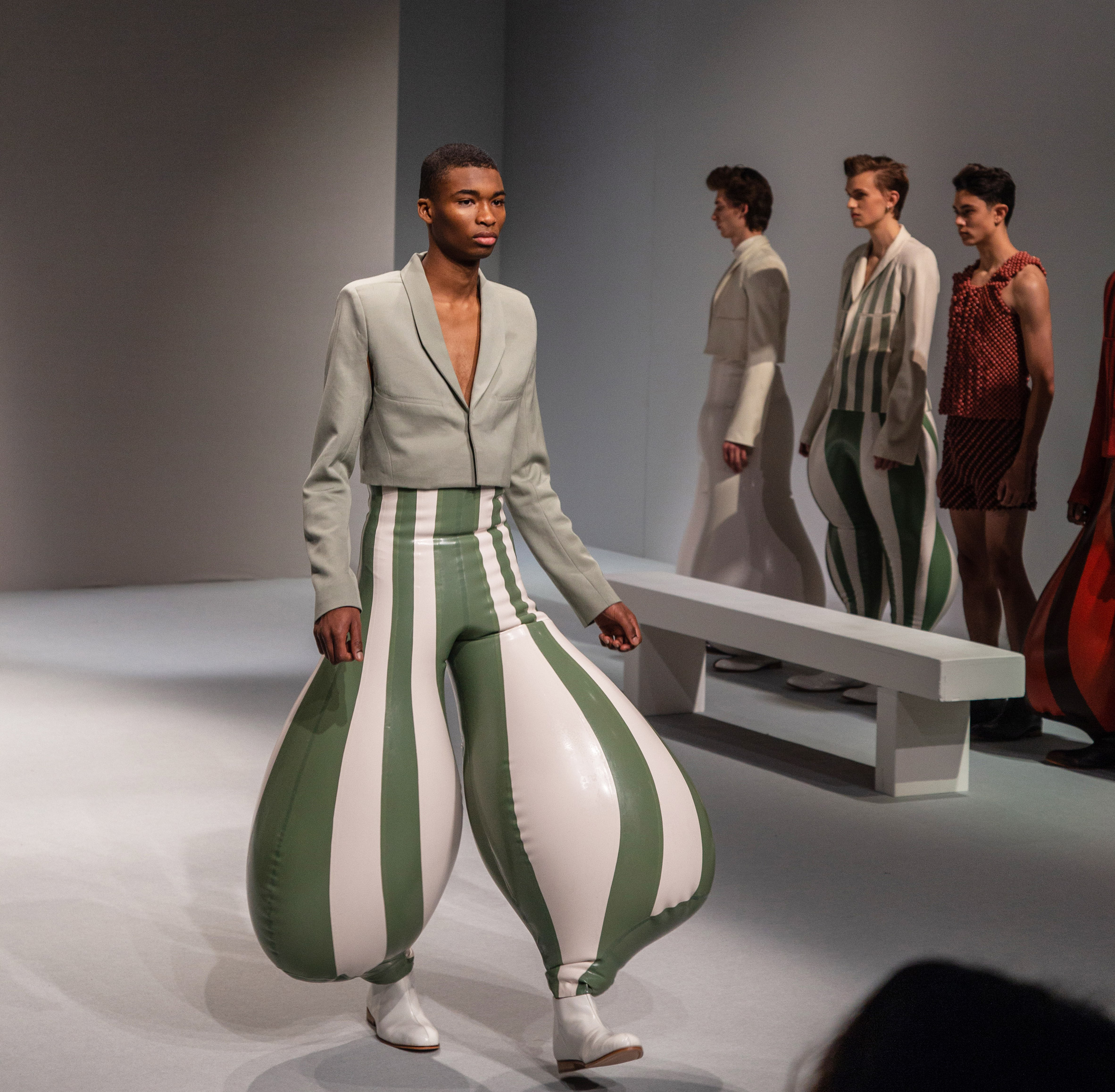 "I got the idea when I was playing with my dog and I started thinking about how exaggerated objects must look from such a low angle," explained the designer, who goes by the single name Harikrishnan.

"The thought of him seeing me as a giant figure or not seeing my head at all was intriguing, so I decided to reimagine the people around me through the game of distortion detached from the stereotypical, pre-determined notions of the human perspective."

To visualise this concept in a garment, all aspects of its fabrication, from the textures, to the colours and the patterns had to lend itself to working in three dimensions. 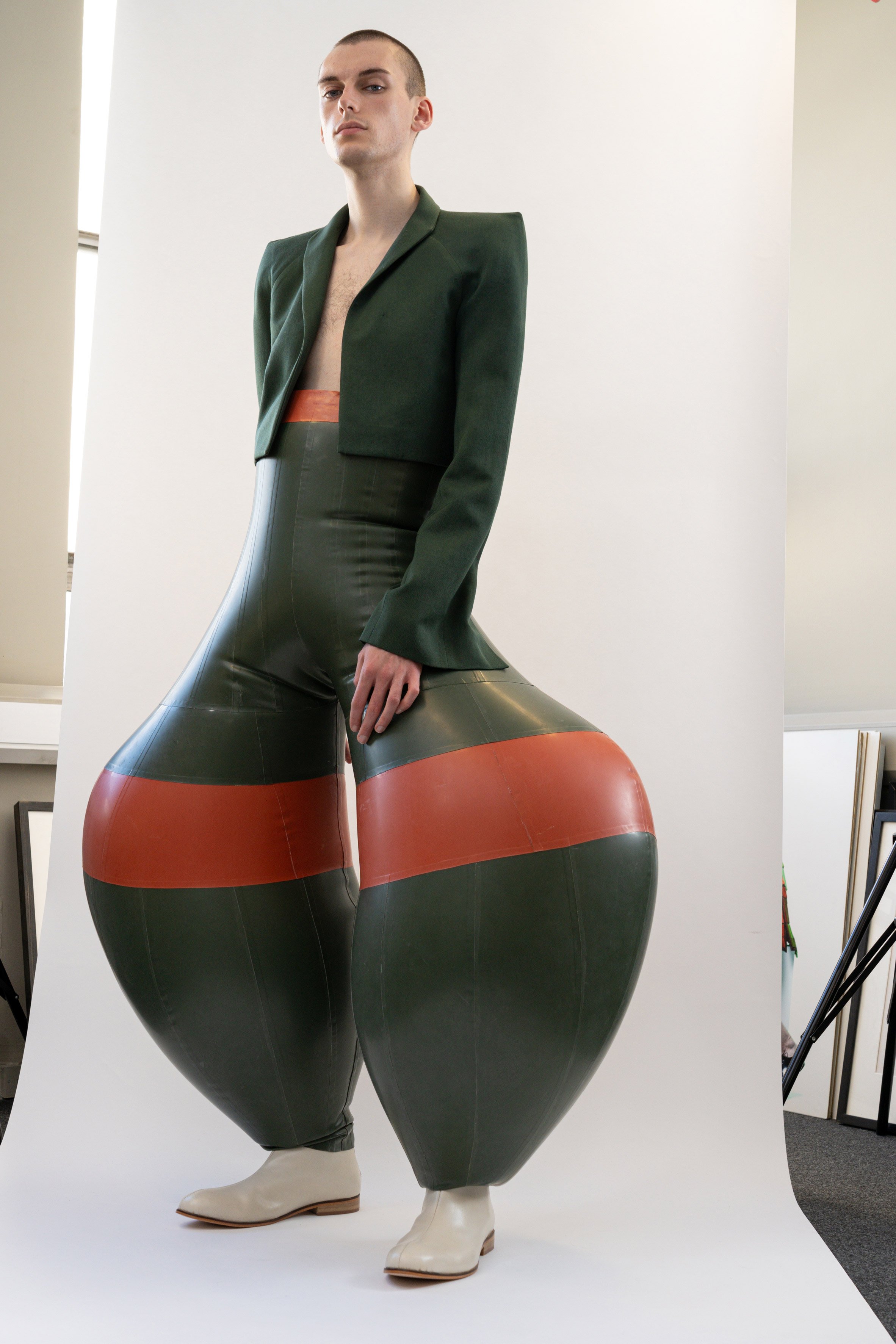 Latex was the perfect material as it stretches and, through its shiny finish, exaggerates the trouser's bulging silhouettes.

Arranging the individual panels into vertical and horizontal stripes further adds to this effect, while making for a playful rather than fetishistic take on latex. 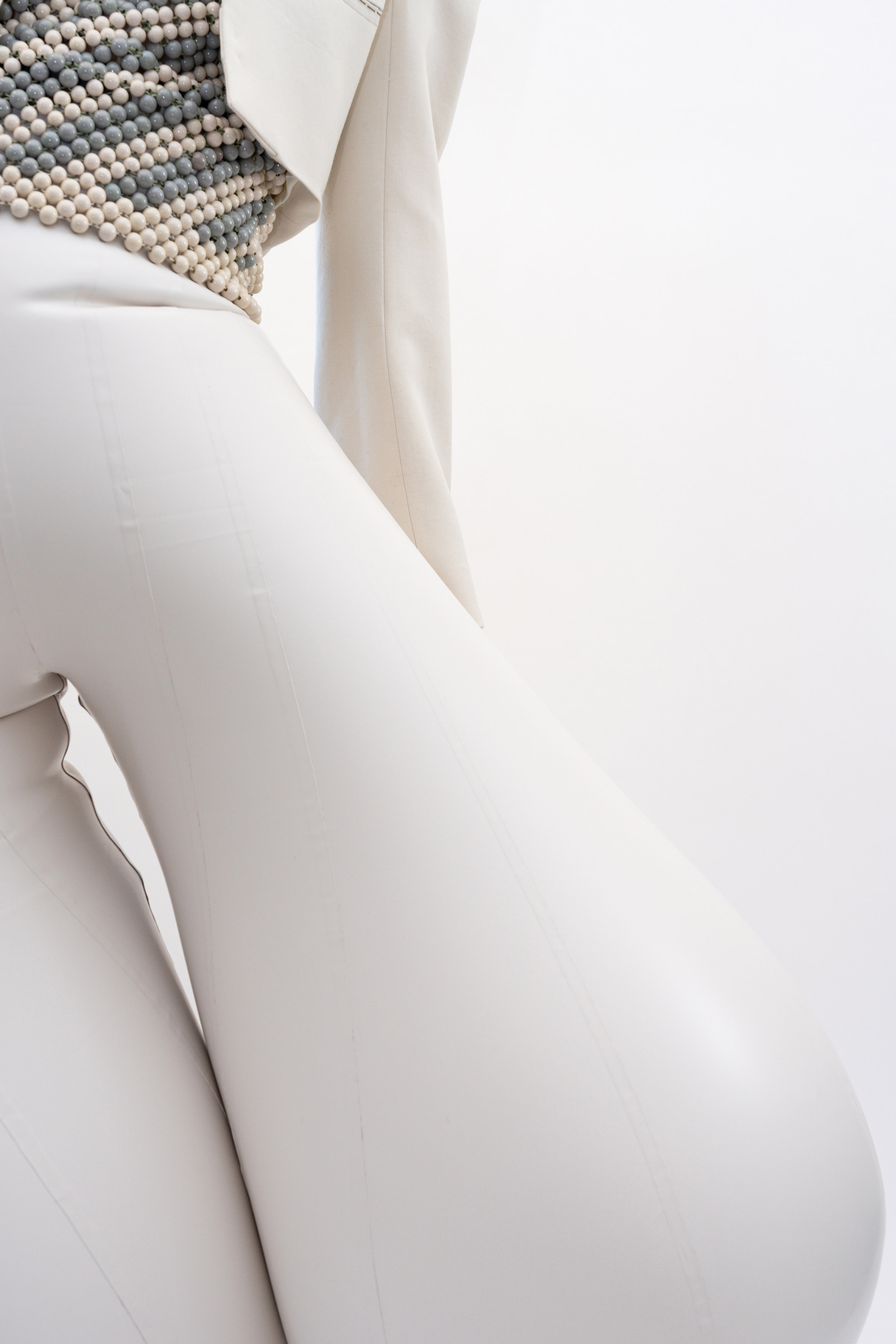 "My cutting method was adopted from morphing, a technique used by people like [French photographer] Jean-Paul Goude, in which you distort images by assembling fragments of the same subject taken from different perspectives," Harikrishnan told Dezeen.

"The final 3D shape of the trousers was visualised in a mini clay model and sliced into fragments. These were then graded and cut in latex, stuck together in various angles with high contouring to create these anatomically impossible forms." 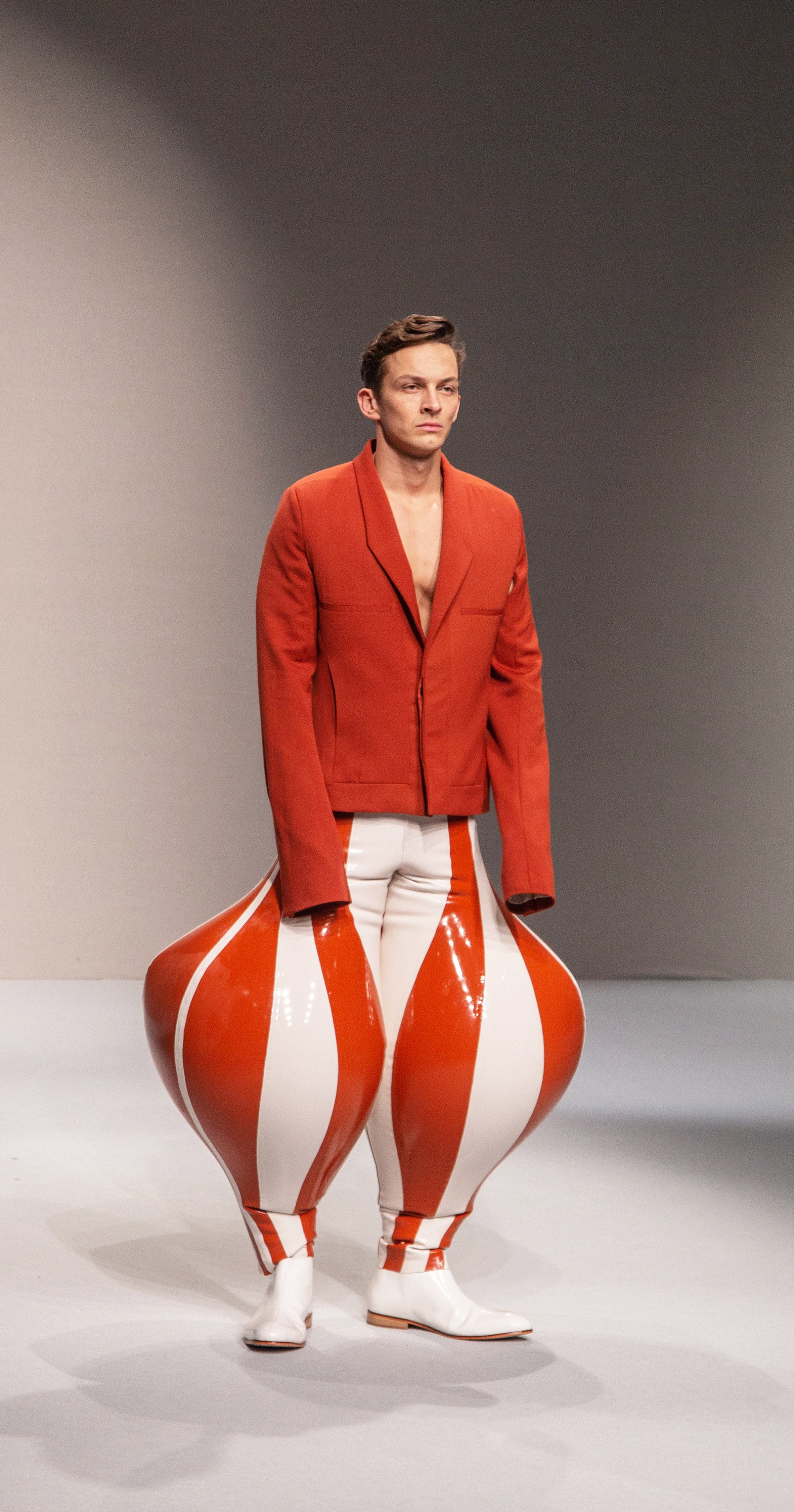 For the top half of the looks, Harikrishnan reverted back to slimline cuts, balancing the voluminousness with crisp suit jackets.

These are variously layered or replaced with tank tops and matching shorts that are strung together from hand-carved wooden beads.

To create the pieces, Harikrishnan lived in an artisan community in Channapatna, India, for a month, learning from and working with woodturning and lacquerwork craftsmen. 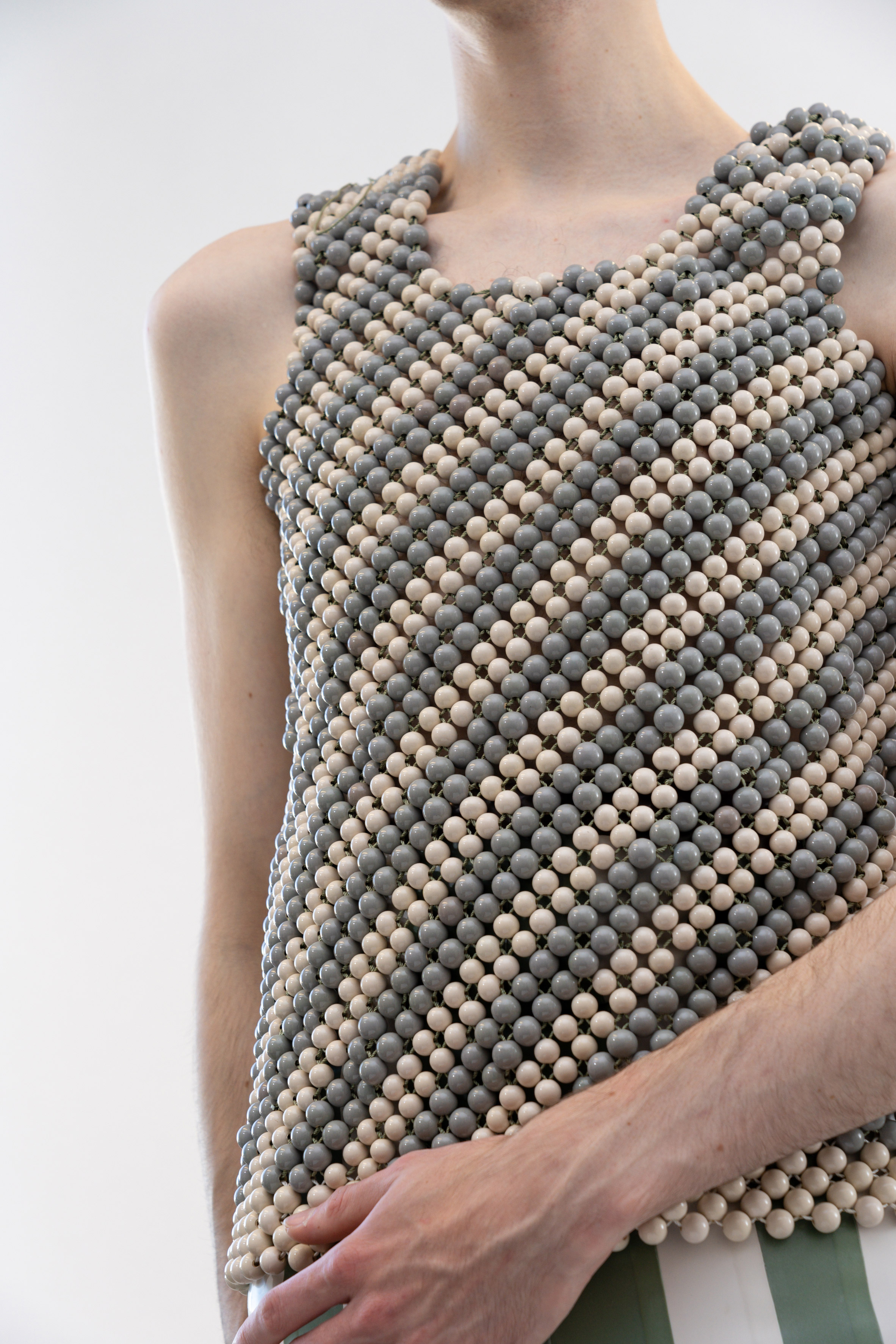 "This project is about contrasting realities, visuals, materials and approaches," he explained.

"Both Channapatna and latex have a very distinctive appeal. Nobody expects wearable pieces from Channapatna, as the craft is generally applied to toys and similar products. By reinterpreting it through fashion I wanted to make the material dynamic, flexible and more relevant to a luxury market."

By juxtaposing this traditional craft with futuristic latex elements, Harikrishnan plays with familiarity and unfamiliarity in the hopes of cutting through the flood of images we take in at any time.

"Especially in fashion, I see the same images and similar proportions everywhere," he explained.

"I want to create visual imagery that's as far away as possible from neutrality, to make people question the relevance of the proportions we see every day." 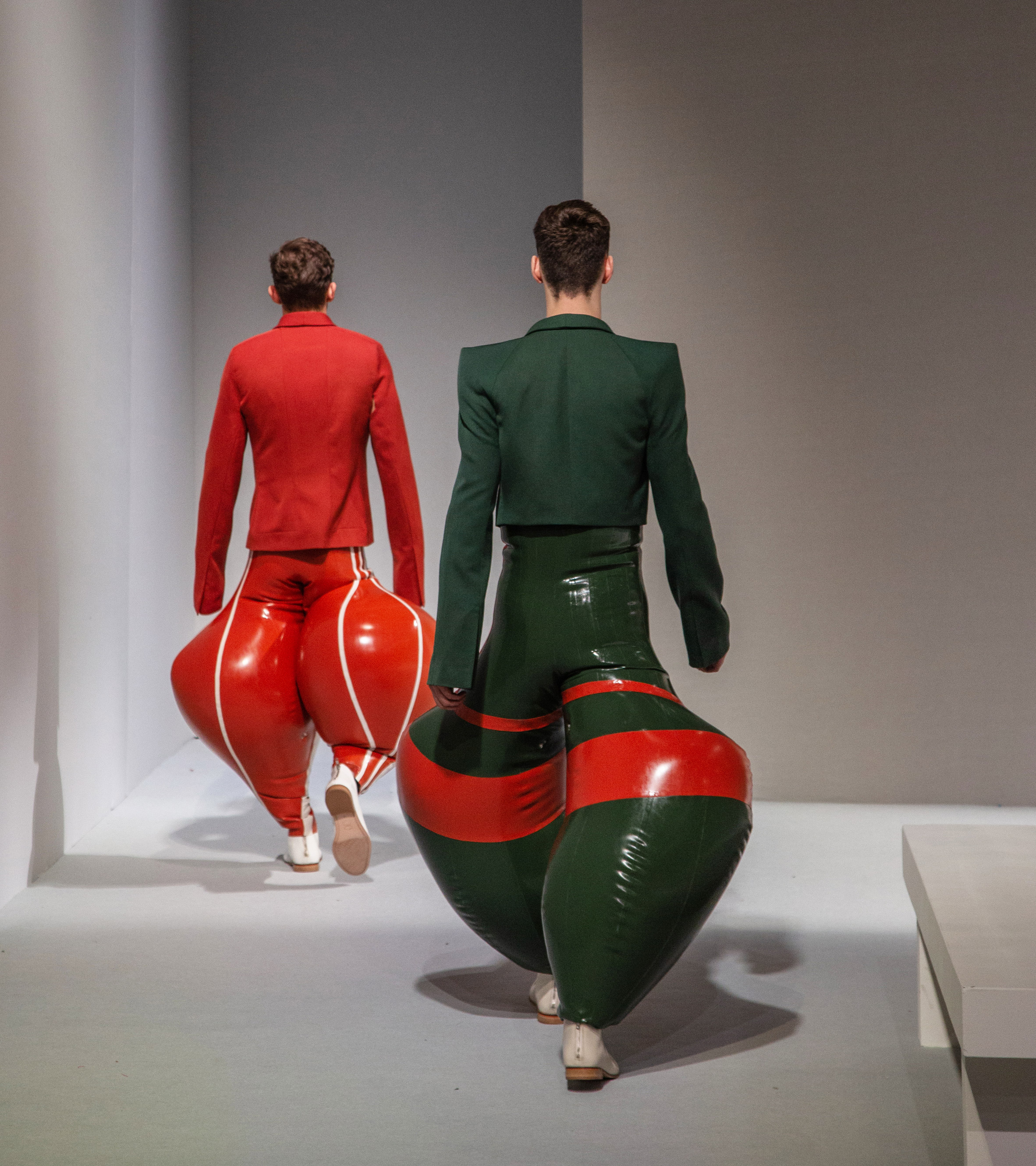 The collection was presented alongside 19 others as part of the London College of Fashion's MA20 catwalk show, celebrating 20 years of postgraduate fashion courses at the university.

A number of other graduate designers have recently experimented with inflatable fashion albeit not in latex.