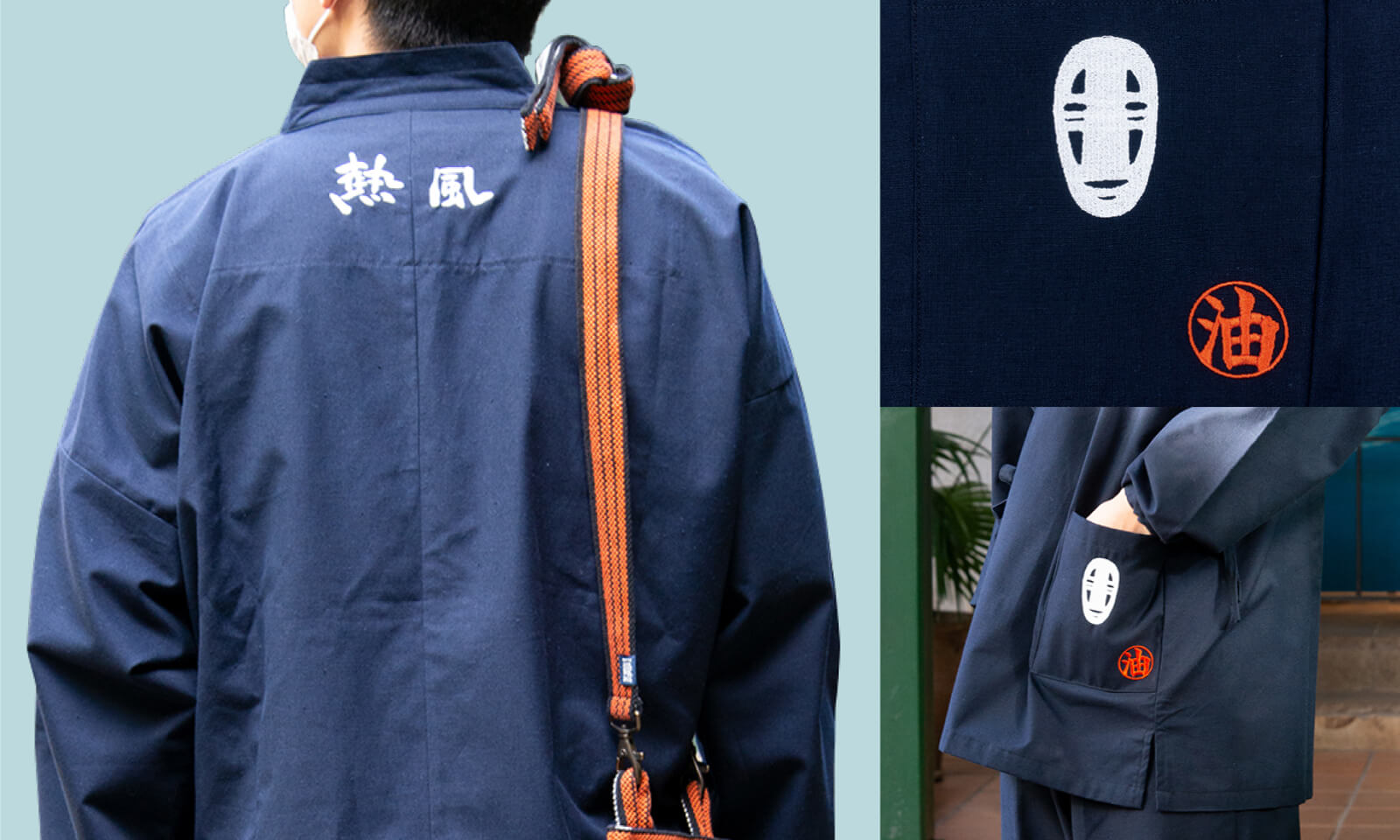 Spirited Away samue is the star of this collection designed by Studio Ghibli producer Toshio Suzuki.

Outside of being Studio Ghibli’s co-founder and producer, Toshio Suzuki is widely known for his love of two things — calligraphy and samue.

The 73-year-old has been showing off his artistic prowess in recent years, teaching us how to sketch Totoro and even holding a travelling exhibition that showcases his calligraphy, alongside a giant head of Yubaba and Zeniba from Spirited Away. Through it all, whether he’s working in private or attending press events, Suzuki often chooses to wear an indigo-dyed samue, the traditional work outfit worn by Buddhist monks, which has also become popular as casual wear in recent times.

So when the Ghibli Museum in Tokyo was looking for a new line of goods to create, they came up with the brilliant idea to combine Suzuki’s love of calligraphy and traditional style for a unique collection. The producer was happy to lend his artistic skills to the project, even coming up with the clever idea to rename the Ghibli Museum as the “Neppu Museum” for the new range. 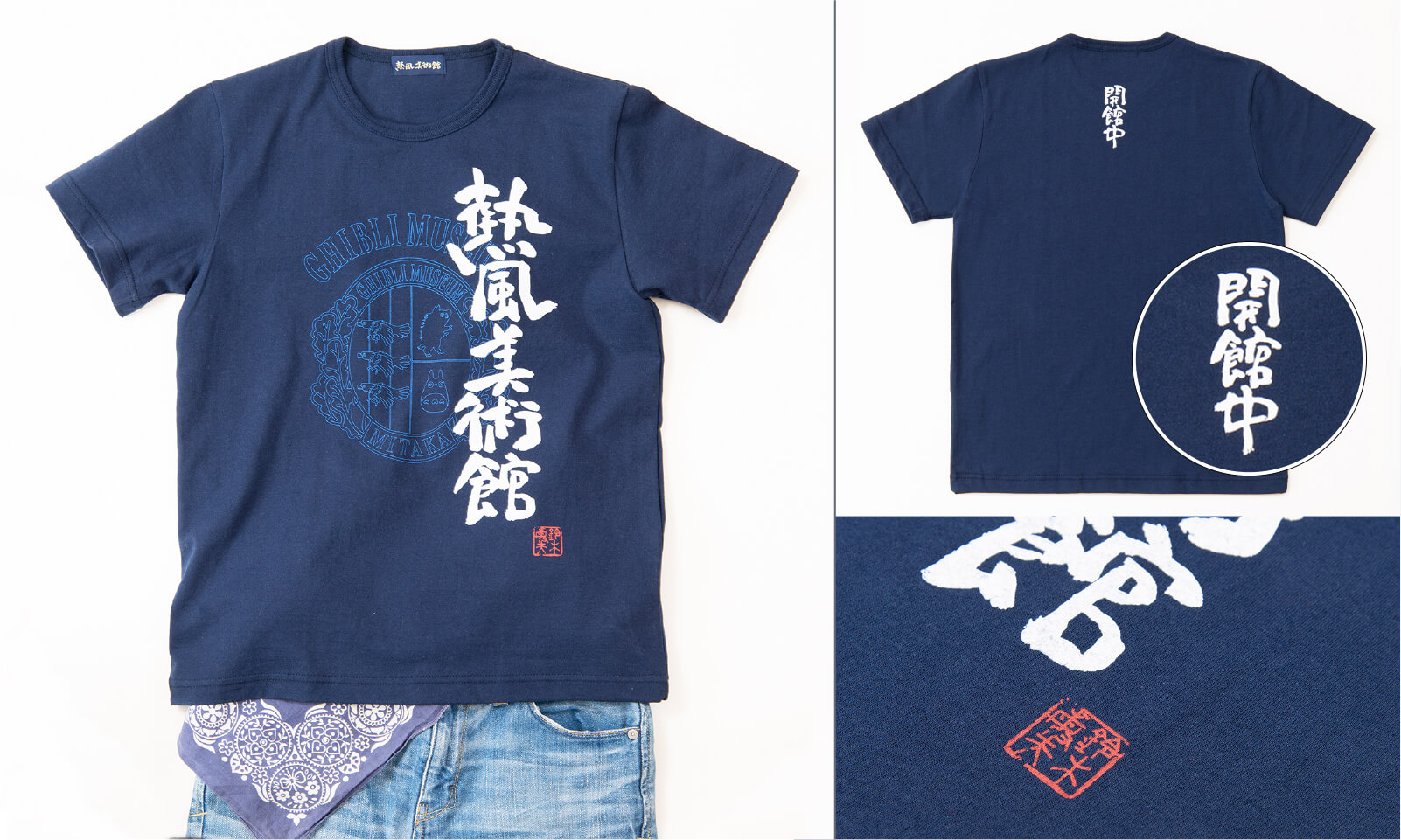 The new name is a nod to the word “Ghibli“, which is an Italian word meaning “hot wind blowing from the Sahara Desert“. Suzuki replaced the word “ジブリ” (“ghibli”) with “熱風” (“neppu”), which literally means “hot wind”, for the new collection, essentially rebranding the Ghibli Museum as the “熱風美術館” (“Neppu Bijutsukan”), or “Hot Wind Museum“.

The first item in the range is an indigo-dyed T-shirt, which has “Neppu Museum” written on the front, in Suzuki’s handwritten calligraphic script. 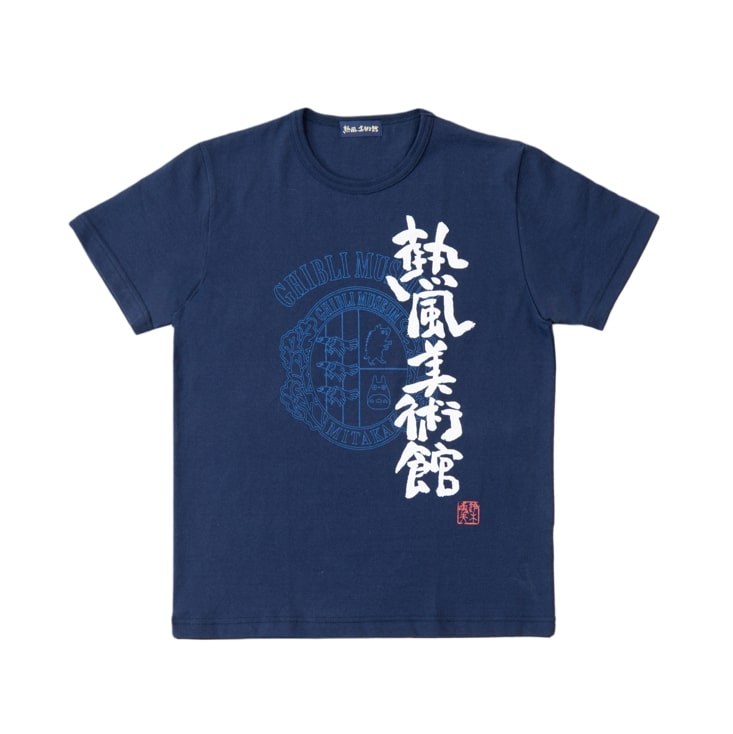 The T-shirt also has “Ghibli Museum” written on it in English, along with images from the crest of the museum — a Totoro, a boar, and three hawks, in reference to the city where the museum is located, Mitaka, which literally translates to “three hawks“. Mitaka is also the inspiration behind the museum’s “Tri Hawks” bookstore. 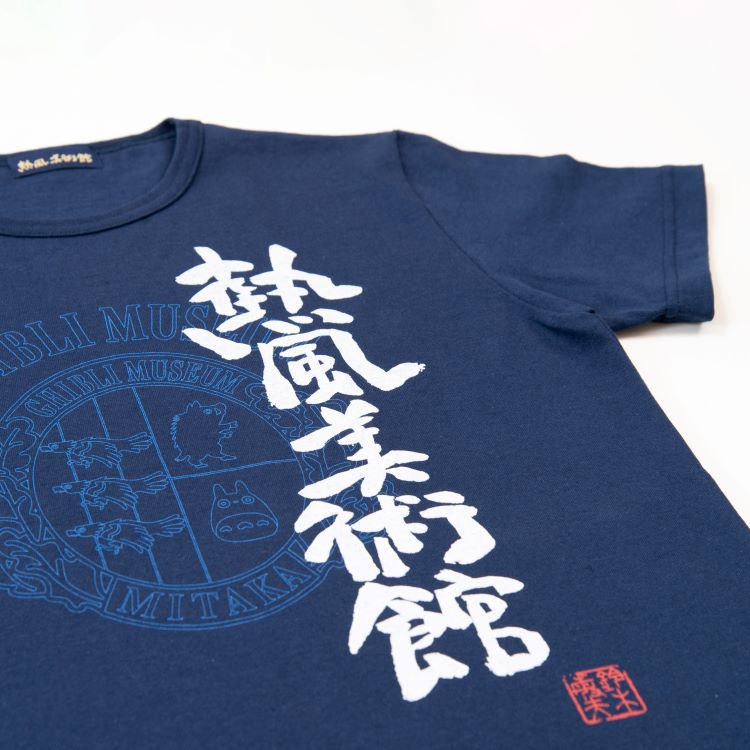 Suzuki’s white script is far more prominent than the museum crest, which draws attention to the humorous new name. 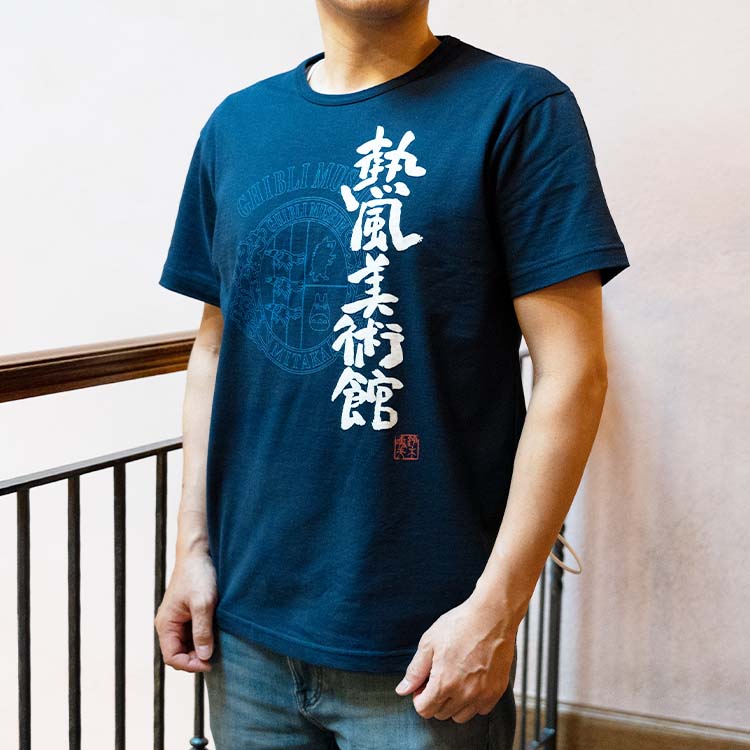 On the back of the shirt is the word “kaikanchu” (“museum currently open“), also written by Suzuki. After being closed for an extended period during the pandemic, the Ghibli Museum is currently open, and it hopes to stay that way, with the help of donations from fans around the globe. 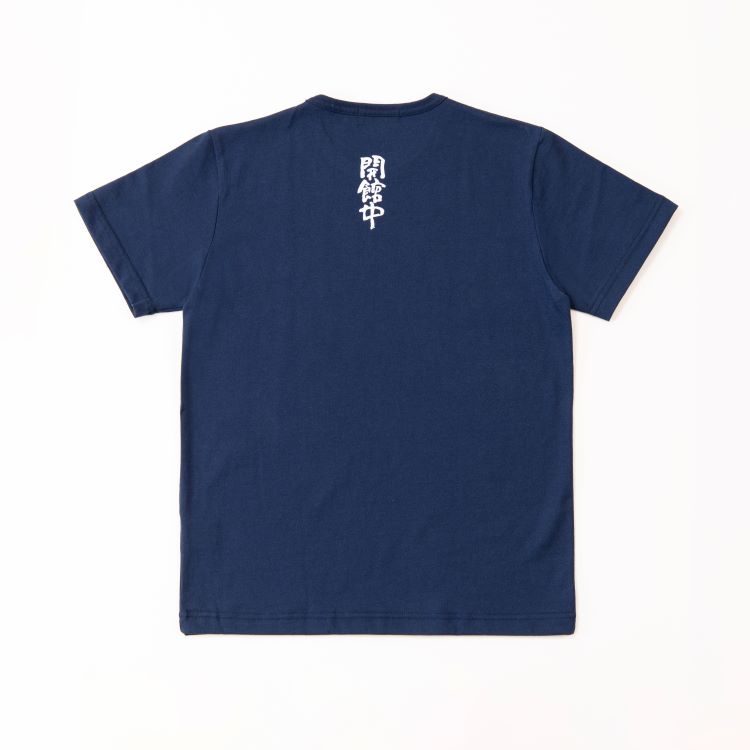 The next item in the collection is a Homaekake Kaban, which needs a little linguistic unpacking. The word “ho” literally means “sail“, while “mae” (“front“) and “kake” (from the verb “kakeru”, “to hang“), combine to mean “apron“. Homaekake, or “sail apron” gets its name from the fact that 15th century sailors in Japan used to cut old sails to make these aprons, which they would tie around their waists.

Today, these thickly woven cotton waist aprons are still worn by people working in traditional trades, like craftspeople and sake sellers, as the thick material protects the legs while the long straps to tie the apron support the lower back when lifting heavy objects like boxes.The homaekake has a very traditional and distinctive look, often using indigo-dyed material and straps with vermillion stitching, and the Ghibli Museum puts a new twist on the design by reimagining it as a “kaban” or “bag“. 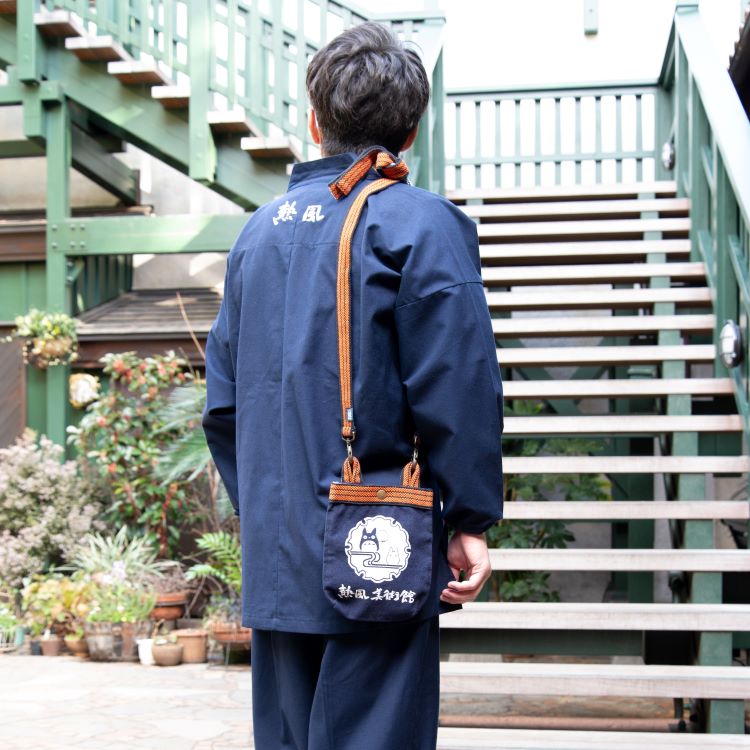 This Sail Apron Bag features a couple of Totoros from the 1988 Ghibli movie My Neighbour Totoro, and beneath them are the words “Hot Wind Museum”. 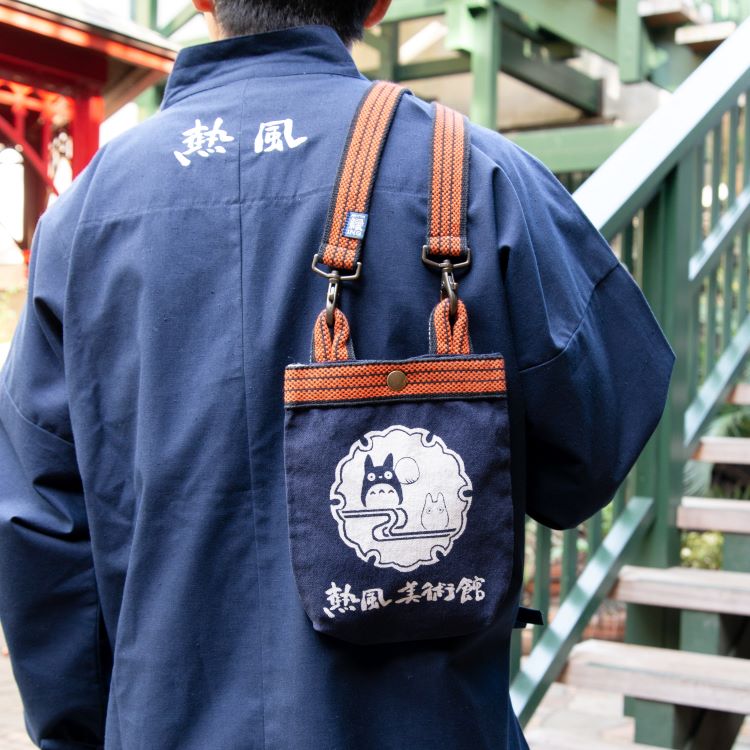 The “family crest-style Totoro design” has been printed on thick and durable fabric woven by a specialist apron maker, so it’s designed to last a long time. 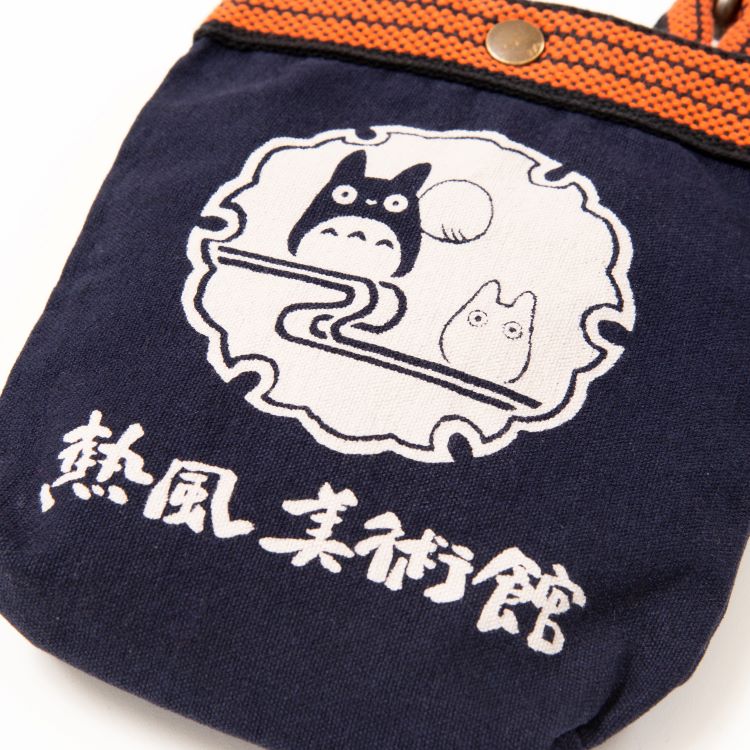 While the bag pairs well with traditional outfits, it looks equally good when worn with casual wear. 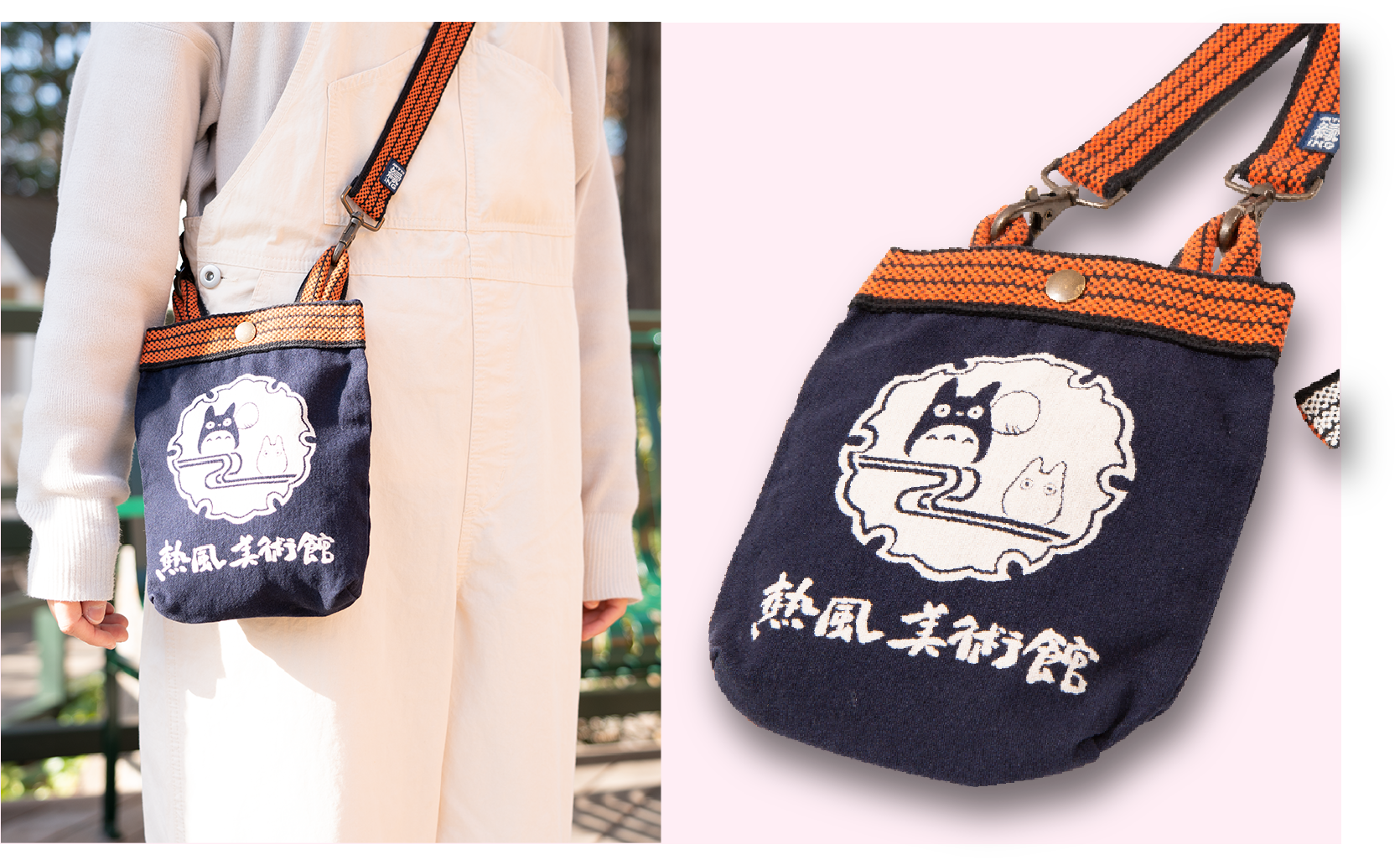 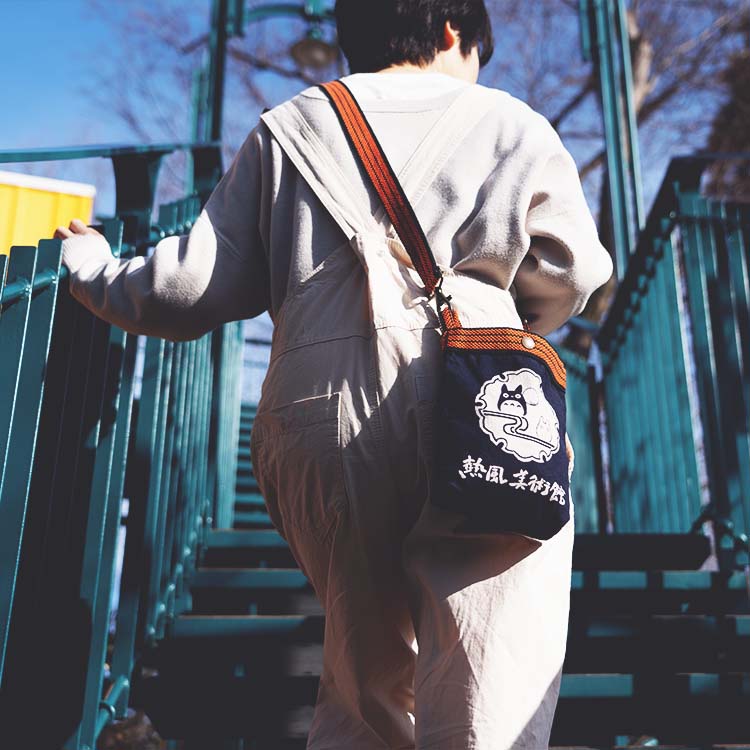 The final item in the collection is the Samue Kaonashi, which translates to “No Face Samue“.

According to the Ghibli Museum, this item was included in the range as an homage to Suzuki’s love for wearing samue. Unlike the indigo two-piece Suzuki normally wears, though, this one comes with some extra embellishments, namely the words “Hot Wind”, written in Suzuki’s hand, on the back of the top… 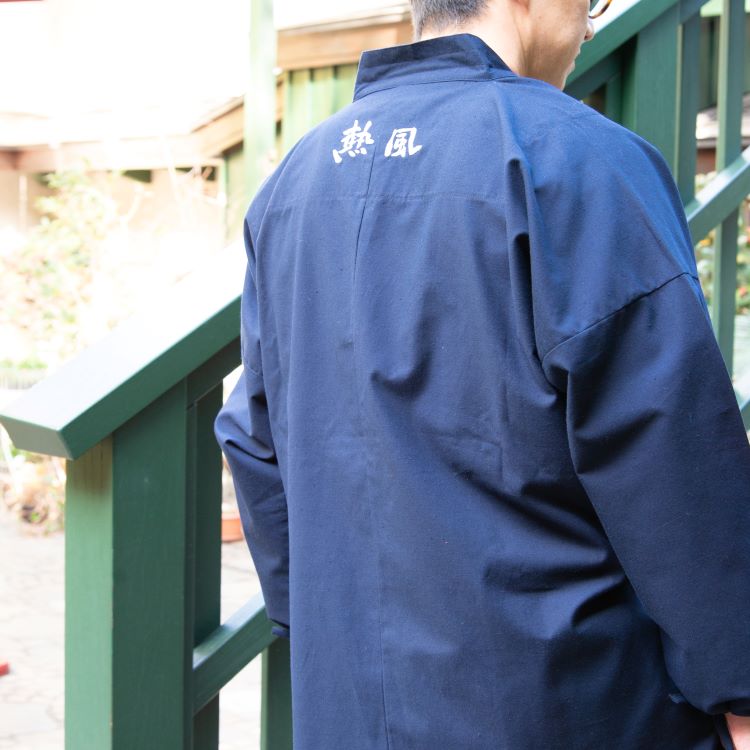 ▼ …and an image of No Face on the front pocket. 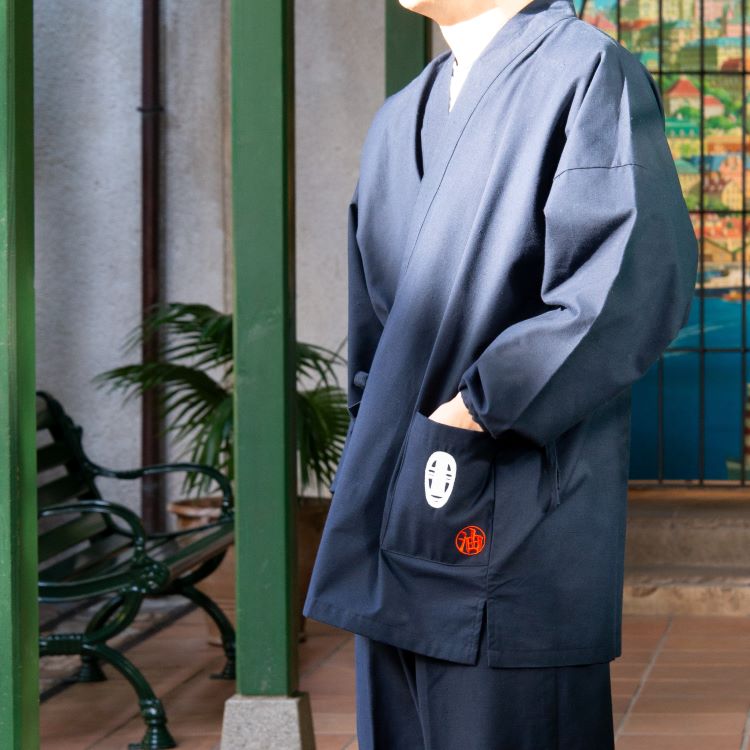 The red kanji for “abura” is also included, as a nod to the Abura Bathhouse, the main setting in Spirited Away, the 2001 movie that No Face stars in. 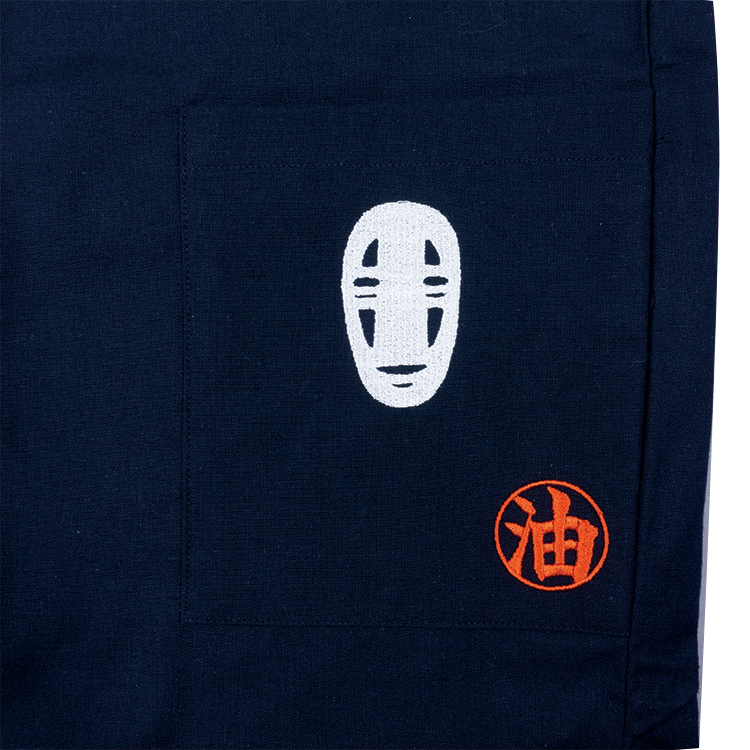 Like the T-shirt, the samue comes with a “Hot Wind Museum” label stitched into the inside of the top. 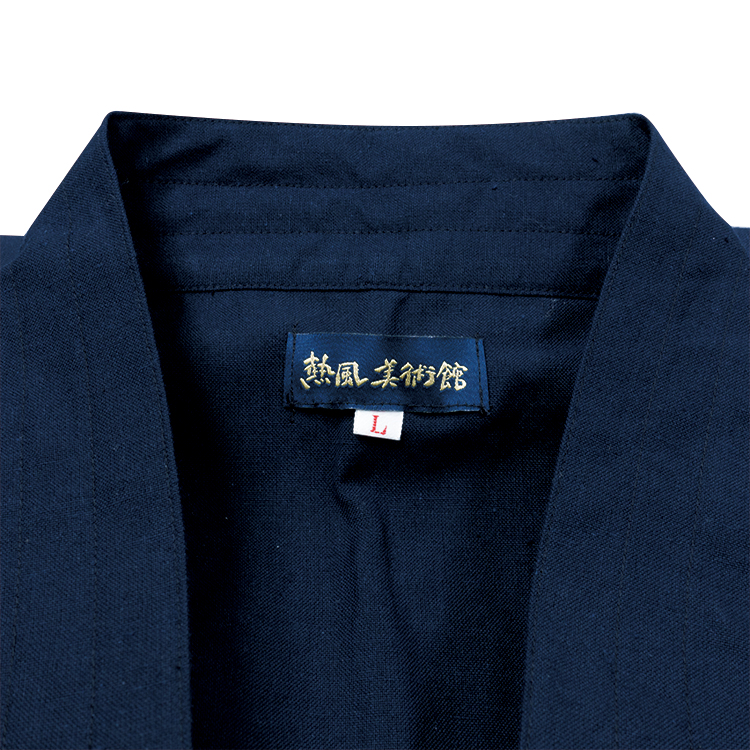 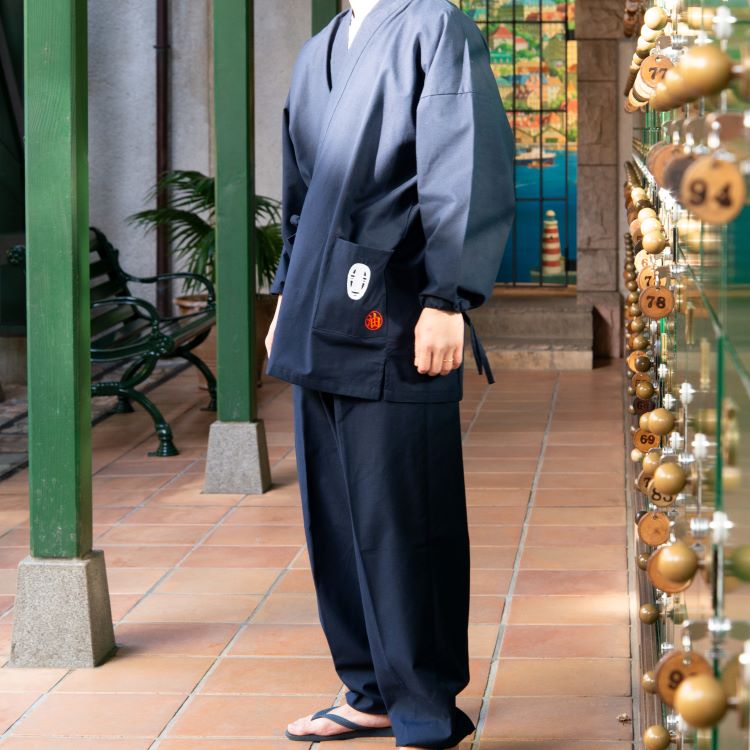 ▼ During the colder months, the samue can be worn with warmer base layers underneath. 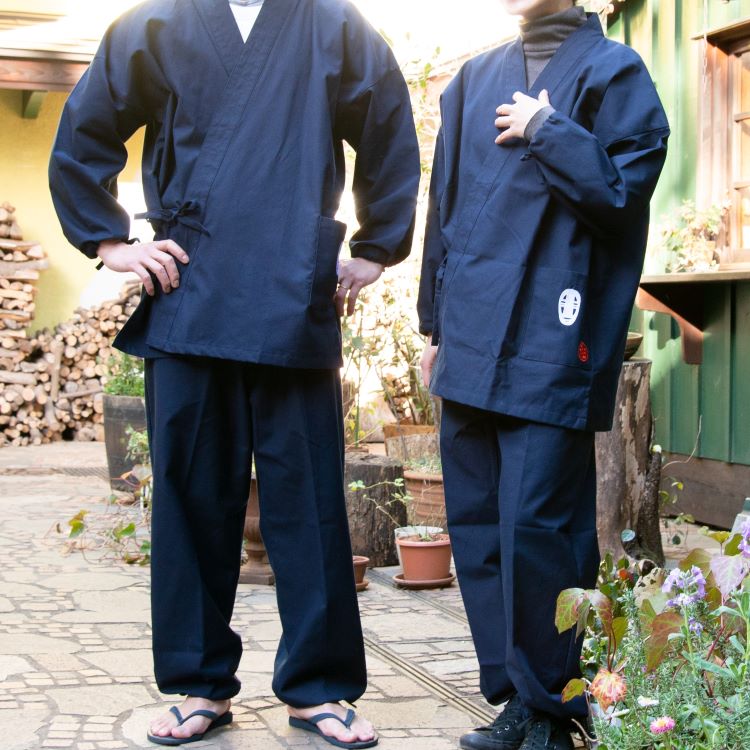 The samue is made in Kurume, a city in Kyushu that’s famous for high-quality cotton fabric production. This attention to detail and top-quality materials in the range are reflected in the prices — the T-shirt is priced at 4,500 yen (US$38.96), while the bag is 9,900 yen and the samue is 16,500 yen.

Though they’re considerably more expensive than other Ghibli goods, these items are designed to last a long time, and it’s not every day you get to purchase a Ghibli Museum item branded as “Hot Wind Museum”. If we had the money, we’d definitely be investing in the No Face samue, which, now that we think of it, is an apt garment for Spirited Away, given that the movie is filled with hidden Buddhist references.

The Most Comfortable Sweatpants According To R29 Editors & Readers
Dec 06, 2022