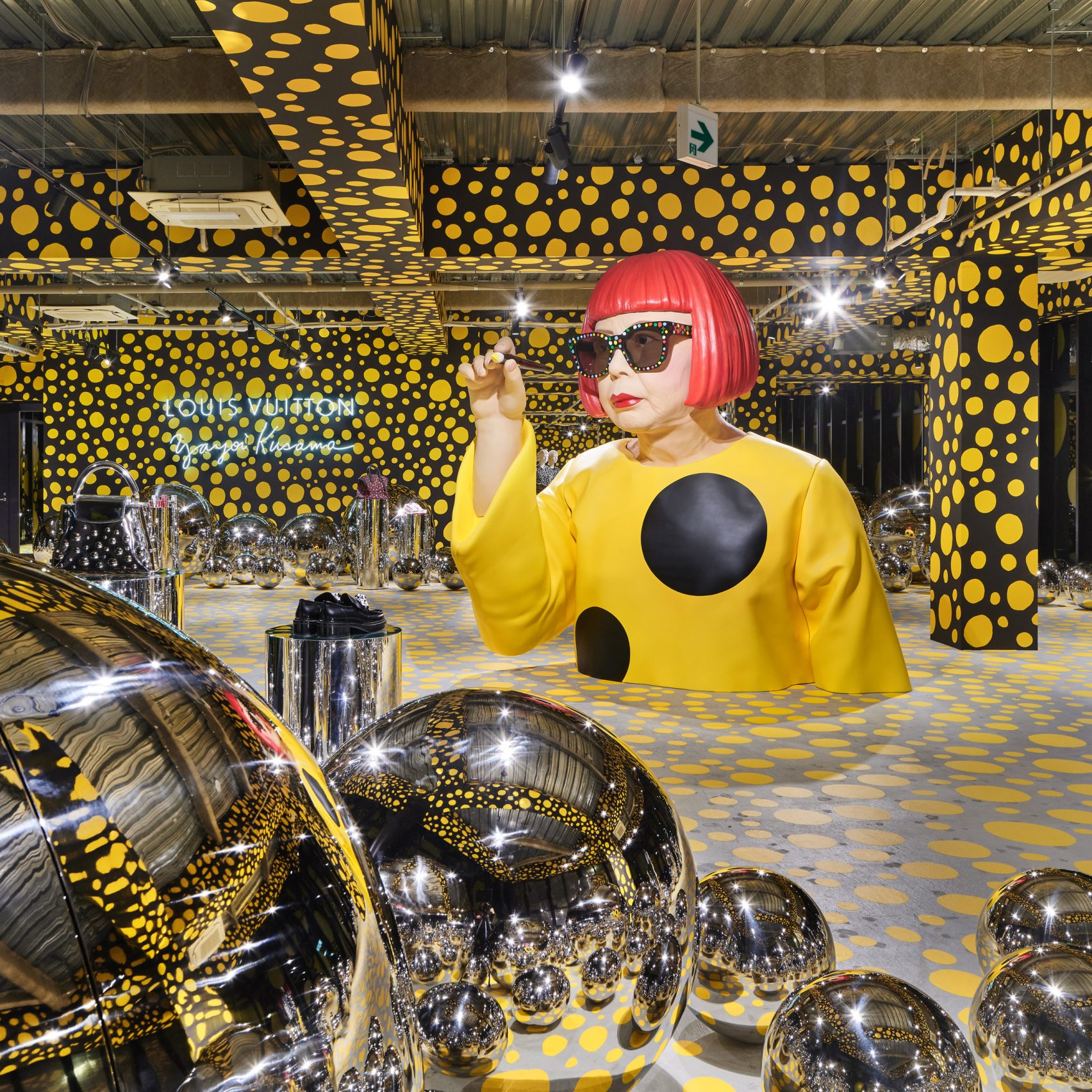 At almost 94 years old, Kusama is widely considered to be one of the world's most successful living artists, with a portfolio ranging from installations, sculptures and performance art to fashion, painting and video.

For decades, she has placed repetitive dots at the centre of her projects, which often refer to the hallucinations and visions that she has experienced since her youth.

From garments and design products to installations that have travelled around the world, here are eight of Kusama's key projects:

Louis Vuitton marked the launch of a capsule collection designed together with Kusama this month with various bold installations at Louis Vuitton stores across the globe, which have been redecorated to reflect the artist's signature bold style.

An inflatable replica of Kusama was placed peering over the roof of Paris' polka-dot-clad Champs-Élysées store, while a large-scale sculpture of the artist was positioned next to oversized mirrored balls at a pop-up outlet in Tokyo.

A life-like animatronic robot of Kusama was inserted into a New York shop window on Fifth Avenue, which playfully paints her famous spots onto the glass for onlookers to see.

Find out more about the latest Louis Vuitton collaboration ›

A park-wide exhibition at the New York Botanical Garden featured trees wrapped in spotty red and white polyester, which were tightly held together by bungee cords and metal staples.

Dancing Pumpkin (main image) is an abstract-shaped bronze sculpture characterised by black and yellow polka dots that was placed on a walkway for visitors to interact with.

The artist also poured 1,400 mirrored steel balls into a pond, which forms part of Narcissus Garden – an ongoing project that began in 1966.

Find out more about Cosmic Nature ›

The artist applied her iconic spots to a series of hand-painted skateboard decks, which she sold at the MoMA Design Store in New York in collaboration with the museum.

Available in two colourways – red and white and black and yellow – the wooded decks were painted on their undersides by Kusama, who alternated between small and larger polka dots for the designs.

Find out more about The Dots Skateboards ›

Kusama completed a month-long intervention at the home, which is now a museum and gallery. The artist stuck hundreds of red dots on the building's facade, based on the idea that the project would allow visitors to "see the world through the eyes" of Kusama and Johnson simultaneously.

An iteration of Narcissus Garden was also installed at the site.

Giant perforated lamps formed the backdrop for this concept store at Selfridges, which displayed the first garment and accessory collection by Kusama and Louis Vuitton in 2012.

To design the collection, the fashion brand drew inspiration from a recent Tate Modern exhibition of Kusama's work. Various bags and clothing, such as a plastic trench coat, were covered with colourful arrangements of the artist's iconic polka-dots.

Find out more about the first Louis Vuitton collaboration ›

Simply titled Pumpkin, this sculpture stood on the end of a pier at the Benesse Art Site on Naoshima Island in Kusama's native Japan, before it was swept into the sea following a typhoon last August.

The black and yellow polka-dotted pumpkin is widely considered to be one of the country's most recognisable artworks. It was fractured into pieces following the tropical storm and is currently in the process of being repaired.

The orb-like sculptures contrasted with the derelict site, which had been left to ruin and then suffered further decay after Hurricane Sandy in 2012.

Find out more about Narcissus Garden on Rockaway Peninsula ›

Like Narcissus Garden, the artist's Infinity Mirror Rooms is an interactive project by Kusama with various iterations that have been installed in locations around the world, including The Broad in Los Angeles.

The Rooms are small boxes flanked by mirrors that extend to the floors and ceilings, which reflect hundreds of LED lights to create visual trickery.

While on display at The Broad, the museum imposed a 30-second "selfie rule" on visitors to avoid people spending too long photographing the installation and causing queues.