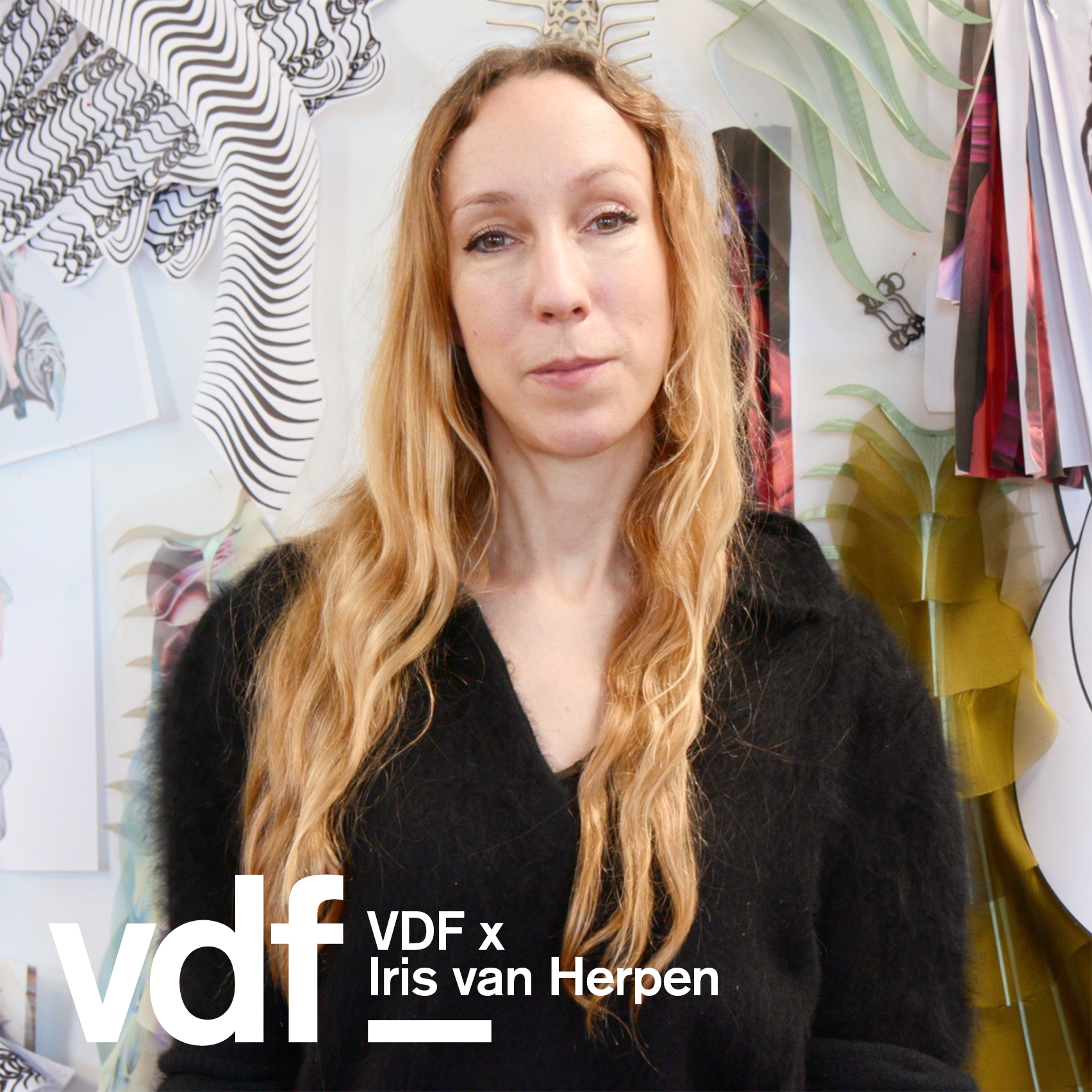 In the first of three exclusive video interviews with Dezeen for Virtual Design Festival, fashion designer Iris van Herpen explains how her training as a ballet dancer led her to pioneer the use of new technologies and materials in haute couture.

The Dutch fashion designer has built her career on taking an experimental approach to fashion, using materials as diverse as silicone, metal lace, iron filings and glass.

According to Van Herpen, her interest in pushing the boundaries of the fashion industry stems from classical ballet, which she studied until she was 18.

"I used to come from dance, so within my work, I'm very much focussed on looking for new forms of movement, new forms of femininity," she told Dezeen when we visited her studio earlier this year. "We focus on the body but also try to explore the space around the body."

Van Herpen describes her fashion creations as "optical illusions", which are designed to exaggerate or enhance the human body's natural movement.

"I think movement and transformation and dance is often very much about optical illusion, and that's what I'm very fascinated by in my material development," she said.

She creates her collections with a small team at her studio in Amsterdam, the Netherlands. But she often collaborates with creatives from other disciplines – including architecture, art and music – to develop the materials and techniques she uses to create her fashion collections.

Over the years, she has teamed up with creatives such as architect Philip Beesley, designer Neri Oxman, musician Björk, choreographer Sasha Waltz and artists such as Studio Drift and Anthony Howe.

For her Wilderness Embodied collection in autumn 2013, Van Herpen collaborated with Dutch designer Jólan van der Wiel to create a series of magnetic dresses made from resin mixed with iron fillings.

"We literally held the magnets by hand and you can shape the texture as you go, so it's almost like dancing with a fabric," Van Herpen explained.

For her Between the Lines collection in spring 2017, Van Herpen presented gowns made from Mylar fabric cut so finely it created rippling patterns that expand and contract with the body's movement, which she created in collaboration with Beesley.

Van Herpen said that it is through her experiments with new materials that the final form of her collections take shape.

"For a very long time in the process, we have no view on the final result yet, which I really like," she said.

"By really creating the materials, you change the way the rules apply to making the garment. It's really a balance between having the right technique and the right material together and when you find that perfect combination, it becomes freedom."

As well as exploring the movement of the human body, many of Van Herpen's collections are biomimetic.

She collaborated with Studio Drift to create her Syntopia collection in autumn 2018, which aims to emulate the motion of a bird's wing. Her most recent collection, Sensory Seas,  drew upon the central nervous systems of deep-sea organisms.

"Nature is really a big part of my work," she said. "I like creating my own versions of it to try to translate the logic behind a system that works so perfectly."

Van Herpen specialises in haute couture, producing custom-made pieces for private clients rather than ready-to-wear fashion. But she believes that the innovations in her collections can have an impact on the wider fashion industry.

"Haute couture has a really beautiful tradition of centuries of craftsmanship," she said. "I think the focus on innovation has been less apparent for the last few decades, maybe because the industry was just small, but it's actually growing again."

"Couture is actually a really strong platform for developing new techniques and materials that can be translated into the larger industries."

This is the first in a series of three video interviews Dezeen conducted with Van Herpen at her studio in Amsterdam for Virtual Design Festival. The second and third instalments will be published in the coming days.

Her previous collections have explored human-animal hybrids, explored the contrasts between water and air, and she used a robot to print and weave a dress over a model during her runway show.

Virtual Design Festival, the world's first digital design festival, runs until 30 June 2020. It is a platform that will bring the architecture and design world together to celebrate the culture and commerce of our industry, and explore how it can adapt and respond to extraordinary circumstances.

VDF will host a rolling programme of online talks, lectures, movies, product launches and more, complementing and supporting fairs and festivals around the world that have had to be postponed or cancelled and it will provide a platform for design businesses, so they can, in turn, support their supply chains.

The post "There is so much in fashion that is unexplored" says Iris van Herpen in Dezeen's exclusive video series appeared first on Dezeen.