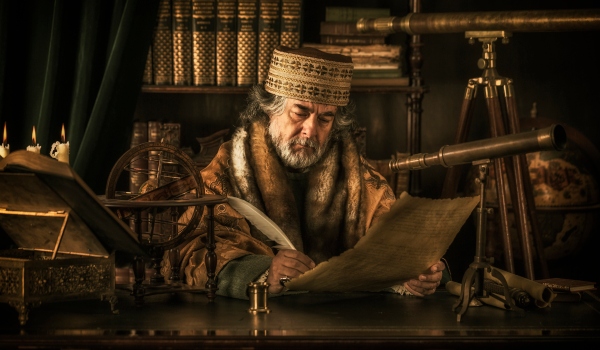 Today29 October 2019Bahais around the world are commemorating the bicentenary of the birth of the Bab. He was the first of two figures whom Bahais regard as the founders of their faith. The Bab was the forerunner, preparing people for the appearance of Bahaullah, whose teachings Bahais follow.

The British Library holds one of the worlds best collections of Babi and Bahai manuscripts. Among the most important of these is one in the handwriting of the Bab himself. It is in the shape of a five-pointed star, called a haykal or temple, because it is representative of the head, two arms and two legs of the human form. However, to appreciate this manuscript, it is necessary to understand something of its context.

The Bab first announced his mission in 1844 in the city of Shiraz in Iran. During a brief, six-year ministry, he stirred up a great deal of controversy and consternationespecially among the religious leaders of Iranwith his claims and the writings he produced in support of these. For most of the years up to his public execution in 1850, the Bab was under house arrest or in prison, while thousands of his followers were also killed.

It was not just that the Babs claim to be the Twelfth Imam or Imam Mahdi, the messianic figure expected by the Shi`i Muslims of Iran, was highly audacious. But, just as Jesus had refrained from conforming to the expectations of the Jews for a military messiah who would lead them to victory over the Romans and establish the dominion of their people, the Bab did not comply with the expectation of Shi`i Muslims that the Twelfth Imam would lead them to a great victory over their enemies and would establish their religion throughout the world. Instead, the Bab interpreted the Traditions (hadth) that led to these expectations in a spiritual sense and proclaimed that his words were Divine Revelation and he was the inaugurator of a new religious dispensation superseding Islam.

The Creation and Significance of the Haykal

In several of his works, the Bab gives instructions for the writing of a haykal, the pentagram or five-pointed star. In the Persian Bayan he states that the five lines that make up the frame of the pentagram create six chambers.

In the Persian and Arabic alphabet, each letter has a numerical value and this fact was used a great deal by the Bab. Five is the numerical equivalent of the letter H and six the numerical equivalent of the letter W. Together they represent the word Huwa which means He and is a common way of referring to God in Islamic mystical literature.[1] The word Bab is also equivalent to 5 (B=2, A=1, B=2). The five lines are the outer or manifest and the six chambers created are the inner or hidden. Thus the Bab (= 5) is the outer appearance or Manifestation of the Unseen and Unknowable Divinity (Huwa). In Babi and Bahai scripture, the Bab is called a Manifestation of God, which should be understood as the Manifestation of the Names and Attributes of God (not that he is an incarnation of God). Indeed, for Bahais, the prophet-founders of all of the religions have an equal station as Manifestations of God.

The Bab specifies that the pentagram should be carried by men about their person. For women, he gives a different design of six concentric circles, thus forming five spaces in which his verses should be written. Thus the same pattern of five and six also are created in this way. This could be seen as a symbol of the fact that women and men are equal but different.[2] The haykal (temple) represents the temple of a human being, the Perfect Man, and the circle represents the Sun of Truthboth of these representing the Manifestation of God, the Bab.

The wearing of amulets containing passages of the Quran as a protective talisman is a common custom among Muslims, usually believed to bring good luck or to give protection. The Bab did not prohibit such practices but rather wanted to educate his followers gradually away from them. He saw their function more as a spiritual protection rather than a physical one. He wanted to direct the thoughts of his followers towards their symbolic meaning, towards God and the Manifestation of God, who guides humanity. In the Persian Bayan, the Bab states that the six chambers within the pentagram and the five partitions made by the six circles in the dira should be filled with verses from his writings, but he leaves the creator of the pentagram free to choose which writings to place there. The important point that the Bab makes in this passage, however, is that the purpose of this is not to achieve some magical effect but rather that what is written on the paper should appear in the soul of that person.[3] In other words that they should become the embodiment of the Divine attributes contained in the passages from his writings. And so, men are called the possessors of the pentagram (haykals) and women are called the possessors of the circle (dira), not just because that is what each carries but because the Manifestation of the Names and Attributes of God is enshrined within the heart of each individual.[4] Bahaullah was later to put this more succinctly thus (Arabic Hidden Words, no. 13):

Turn thy sight unto thyself, that thou mayest find Me standing within thee, mighty, powerful and self-subsisting.

The second important point that the Bab makes in this passage is that his intention in asking his followers to carry these pentagrams and circles is that by having their attention constantly turned towards God, his followers will, in the day when the next Manifestation of God appears, immediately turn to him.

The British Library haykal of the Bab

The haykal which the British Library holds (Or 6887) is on a large sheet of pale pink paper (27.5cm x 40.5cm) in the exquisitely beautiful and carefully written handwriting of the Bab. Although the words are written very smallsuch that a magnifying glass is necessary to read italmost every word is clearly legible and elegantly formed. There is no indication of the person for whom this haykal was written. It is possible to speculate that it was written towards the end of the Babs life because it is similar in wording to such works as the Kitb al-Asm and the Panj Shan, which were written while the Bab was imprisoned in isolated fortresses in the northwest of Iran in the last three years of his life.

In many religions, there is a tradition of repetitive chanting of short significant phrases; for example dhikr in Sufism, hesychasm in Orthodox Christianity and mantras in Hinduism and Buddhism. This haykal of the Bab is similar in that it comprises repetitions of short rhymed and rhythmical sentences. As with many other writings of the Bab, it is clear that the words are intended to be chanted out loud and experienced as much as understood. The performative aspect is at least as important as the intellectual. The performative nature of the Babs own composition of such works and the effect it had on others can be gleaned from an incident that is recorded about him. This occurred in Isfahan in the house of the Imam-Jumih (the leader of Friday prayers), one of the religious dignitaries of the city, which at that time was the foremost centre for religious studies in Iran. The Bab was accommodated in this house for the first period of his stay in Isfahan and many of the clerics and religious students in the city would come in the afternoons and evenings to hear him speak and to ask him questions. When asked to reveal a commentary on the Srat al-Ar (Quran 103), the Bab began to chant and:

They seemed as if bewitched by the magic of His voice. Instinctively they started to their feet and, together with the Imm-Jumih, reverently kissed the hem of His garment. Mull Muhammad-Taqy-i-Harat, an eminent mujtahid, broke out into a sudden expression of exultation and praise. Peerless and unique, he exclaimed, as are the words which have streamed from this pen, to be able to reveal, within so short a time and in so legible a writing, so great a number of verses as to equal a fourth, nay a third, of the Qurn, is in itself an achievement such as no mortal, without the intervention of God, could hope to perform. (The Dawn-Breakers, (ed. and trans. Shoghi Effendi), p. 202

The content of the haykal may be described as a paean of praise to God. The words consist of repeated rhymed and rhythmic sentences, such as:

O people of the Bayan [followers of the Bab]! Fear ye the Most Merciful and consider what He [the Bab] hath revealed in another passage. He said: The Qiblih [direction of prayer] is indeed He Whom God will make manifest; whenever He moveth, it moveth, until He shall come to rest. Thus was it set down by the Supreme Ordainer when He desired to make mention of this Most Great Beauty [i.e. Bahaullah himself].

This post was previously published on bl.uk and is republished here under a Creative Commons license.

Talk to you soon.

If you believe in the work we are doing here at The Good Men Project and want to join our calls on a regular basis, please join us as a Premium Member, today.

Need more info? A complete list of benefits is here.

The post The Star Tablet of the Bab appeared first on The Good Men Project.

The Trendy Flat-Iron Brand I Loved in College Now Makes a Garment Steamer I Can’t Live Without
Sep 20, 2021