In the world of classic menswear, there are certain time-honored color pairings that are almost guaranteed to succeed. You dont just have to confine yourself to these staple colors of menswear, however, case in point, the more adventurous pairing well be discussing today: blue and red.

Where Can We See Red & Blue Pairings?

While its not an exceptionally popular pairing, it is a favorite among politicians in the United States. A blue suit, white shirt, and red tie have been the go-to uniform for many a politician for much of the latter 20th century. That is, of course, if theyre not wearing a black suit. The intention with this red, white, and blue color pairing among politicians is obviously to echo the colors of the American flag, however, it wont look like a costume, at least when its done correctly. Phrased another way, if this red, white, and blue color pairing werent effective, politicians probably wouldnt wear it. After all, one of their main considerations is making a good first impression. 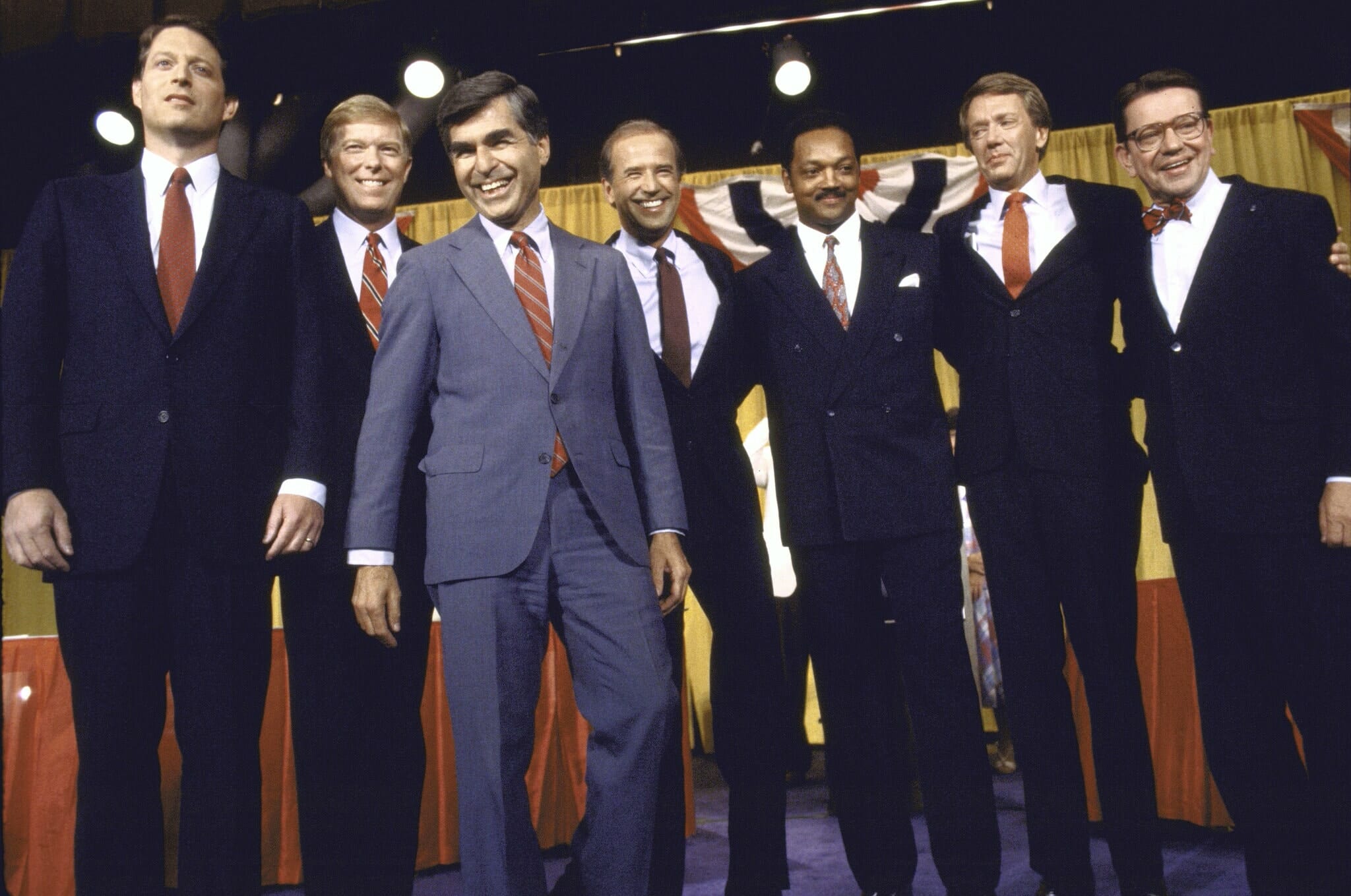 Another reasoning here is that scientific studies have shown that red is perceived by many people to be a power color. Said studies have often reached the conclusion that wearing red makes people seem more attractive, outgoing, and successful, and boosts their confidence. In fact, a study of British soccer teams over sixty years actually showed that teams who wore red won their matches more often. This may have something to do with the fact that red not only increases confidence but testosterone levels, as well.

So, the psychological benefits of wearing red are clear. But outside of trying to evoke the American flag, why do we think you should specifically pair it with blue? Simply put, the color wheel holds the answer here. Red is an intense color, and the richer of the two warm primary colors on the color wheel, the other of those being yellow. Thus, because it is often so bold and intense, it works better in smaller doses, when paired and grounded with a complementary cool color. While reds direct complement on the color wheel is actually green, the color green contains some warmth, given that its composed of blue and yellow. Also, the red and green color pairing has a particularly strong association with the Christmas holiday in many parts of the world. As such, at least in the world of menswear, it can often be a smarter choice to pair the intensity of red with the only cool primary color there is, blue. And another plus for using blue in this combination, as weve already said: blue is one of the staple colors of classic menswear, so youll be able to find it in almost any garment and in almost any shade. 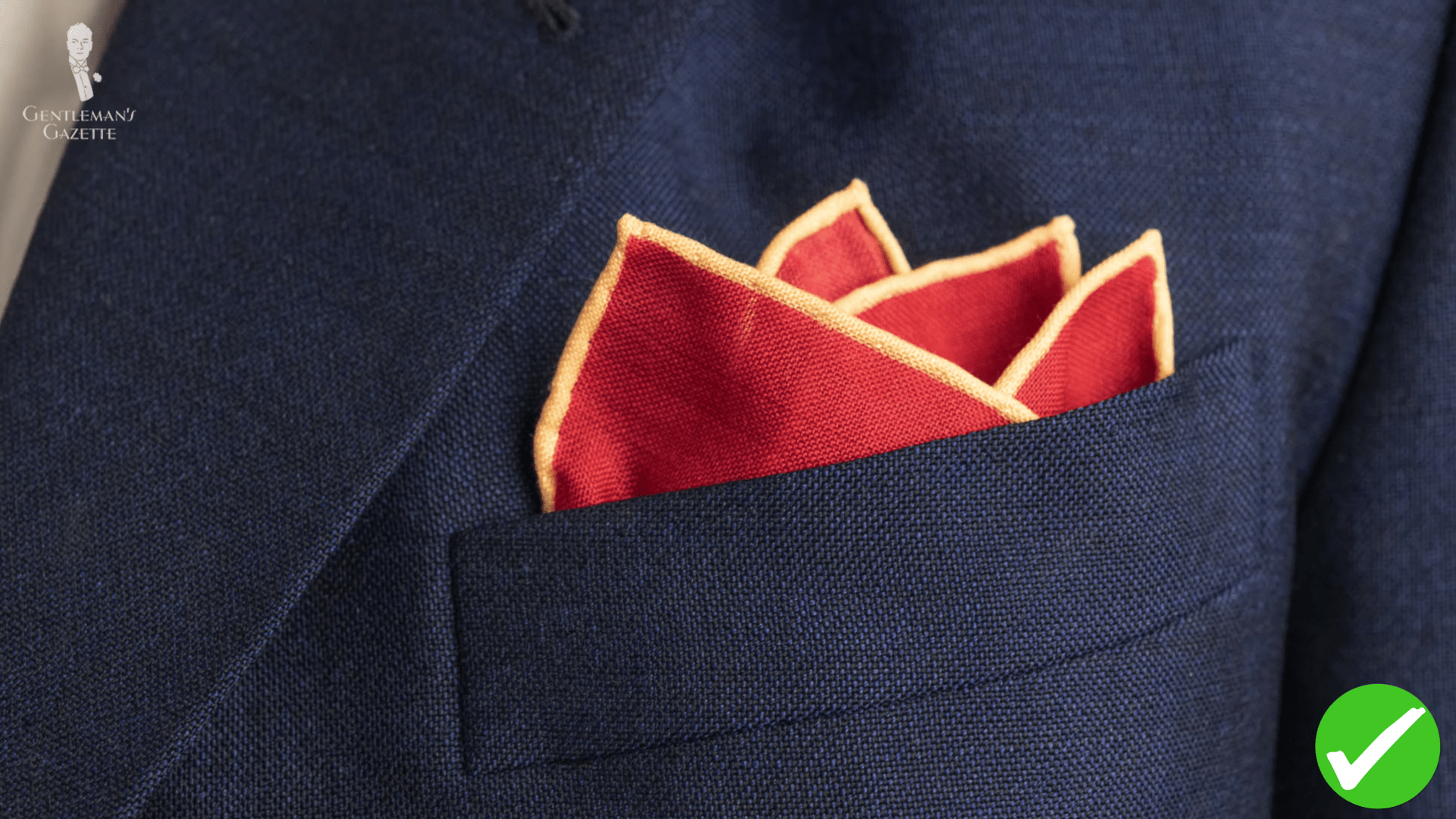 With most brighter or more intense colors, the safest bet is to wear them in your accessories. Therefore, you can start by incorporating red into your tie or your pocket square, possibly also with blue. As weve said countless times before: when it comes to ties and pocket squares, dont wear overly shiny satin silks, and dont match your pocket square and tie together exactly. Both of these choices are just going to come off looking cheap and unstylish. Instead, you could try a tie that has some texture to it, like a grenadine tie or knit tie in red. Another option would be incorporating red into a pattern like a shantung striped tie or a medallion pocket square from Fort Belvedere. 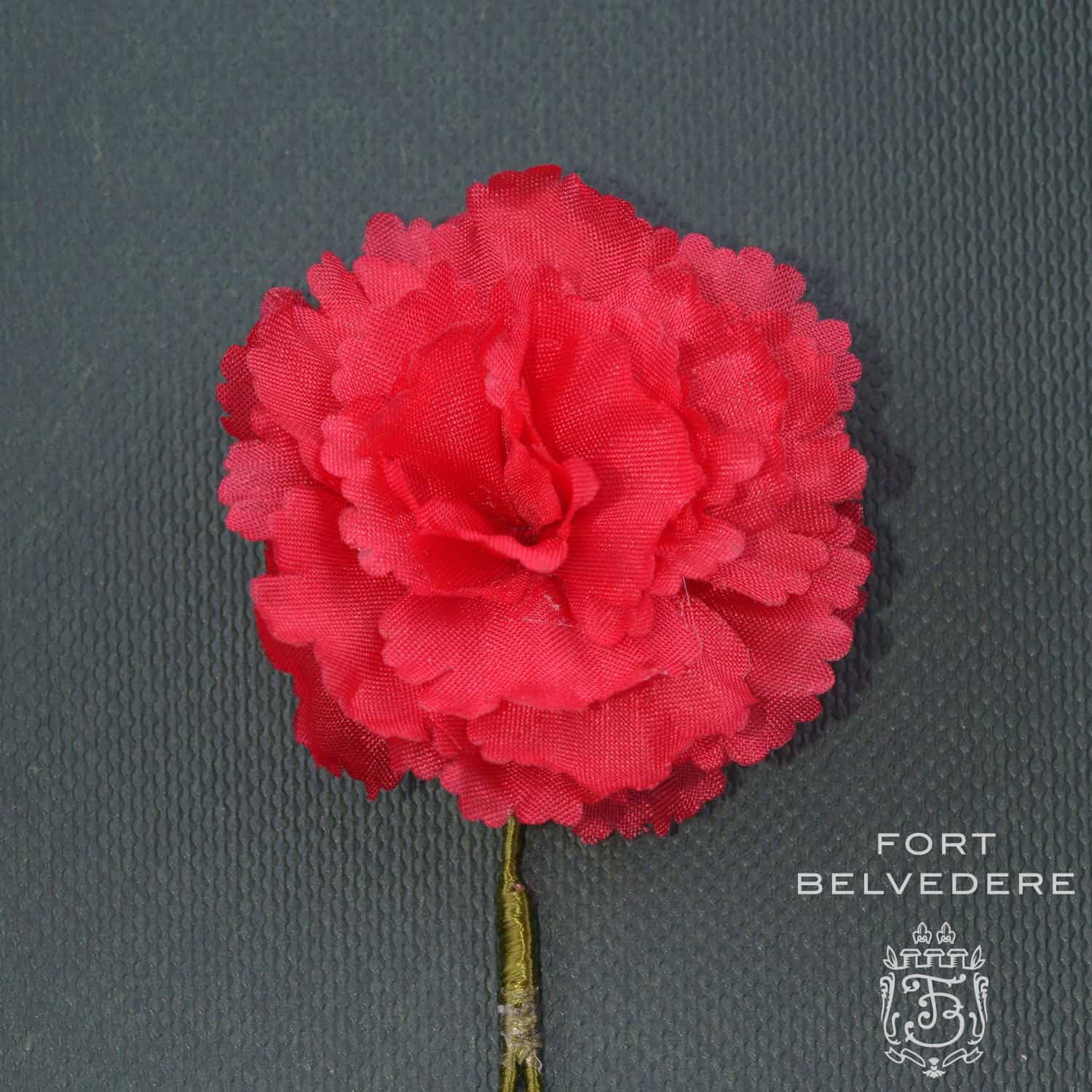 For a different sort of accessory, you could also wear a red boutonniere, such as a carnation or a rose. Boutonnieres arent commonly worn by most men these days, so youll definitely stand out a bit if you try one, but if youve got one thats working harmoniously in your outfits color palette, its going to look smart. You could also wear red cufflinks.

Now, we, here at the Gentlemans Gazette, are not big fans of outlandish or crazy socks (as weve discussed before) and as weve also said, red is an attention-grabbing color, so you have to decideif youre going to wear socks with red in themwhether you really want peoples attention directed at your ankles instead of your face. To balance this, you could go with a subtle yet distinctive option like the shadow striped socks featuring midnight blue and burgundyfrom Fort Belvedere. 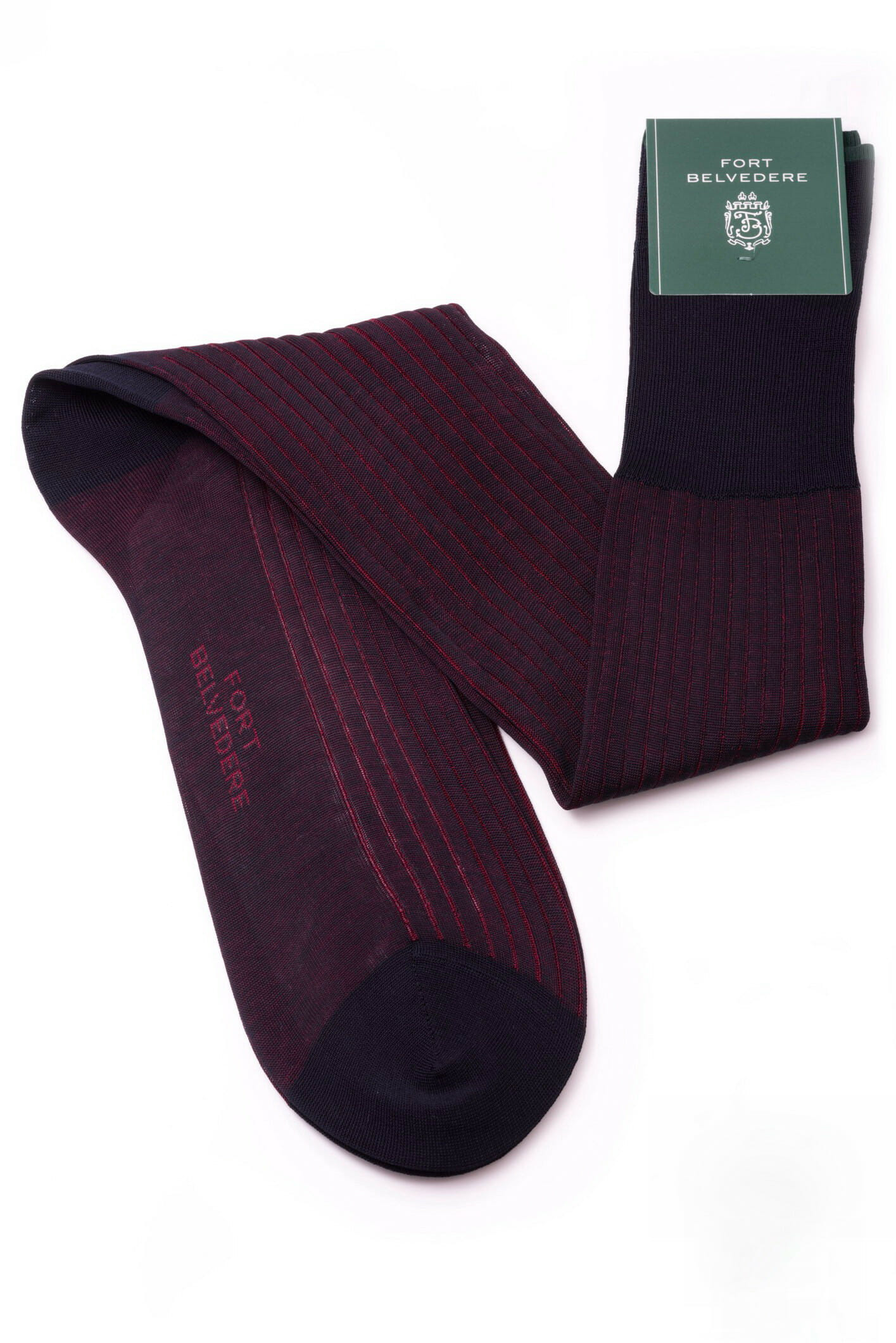 You could also go a little bit bolder, such as shadow stripes featuring navy blue and red, or blue socks with red clock patterns. And of course, now would be a good time to note that not every element of your outfit has to feature both colors working together. You could, for example, wear socks that just had shades of blue or red on their own, and you could incorporate other accent colors as well as with any outfit. Just be sure that things are overall working harmoniously together and not fighting for the viewers attention.

As we just mentioned, not every element of your outfit has to feature both colors working together. If youve already got some red in your accessories, tamping things down a bit with a solid blue shirt or a shirt with a pattern (say, blue and white working together) would be a safe bet. A bolder choice, meanwhile, would be a shirt incorporating a red pattern such as stripes or checks. And while pastel blue is a staple of classic menswear, we wouldnt really recommend solid red shirts, either bright or dark, as they dont really have much of a place in classic menswear. Theyre more at home in contemporary looks and dont mesh well with the more classic fashions that were talking about. A shirt with a red and blue pattern could also be an option. Of course, whatever the color situation, just remember the finer and smaller a pattern, the more formal a shirt is; the larger or bolder a pattern, the less formal the shirt. 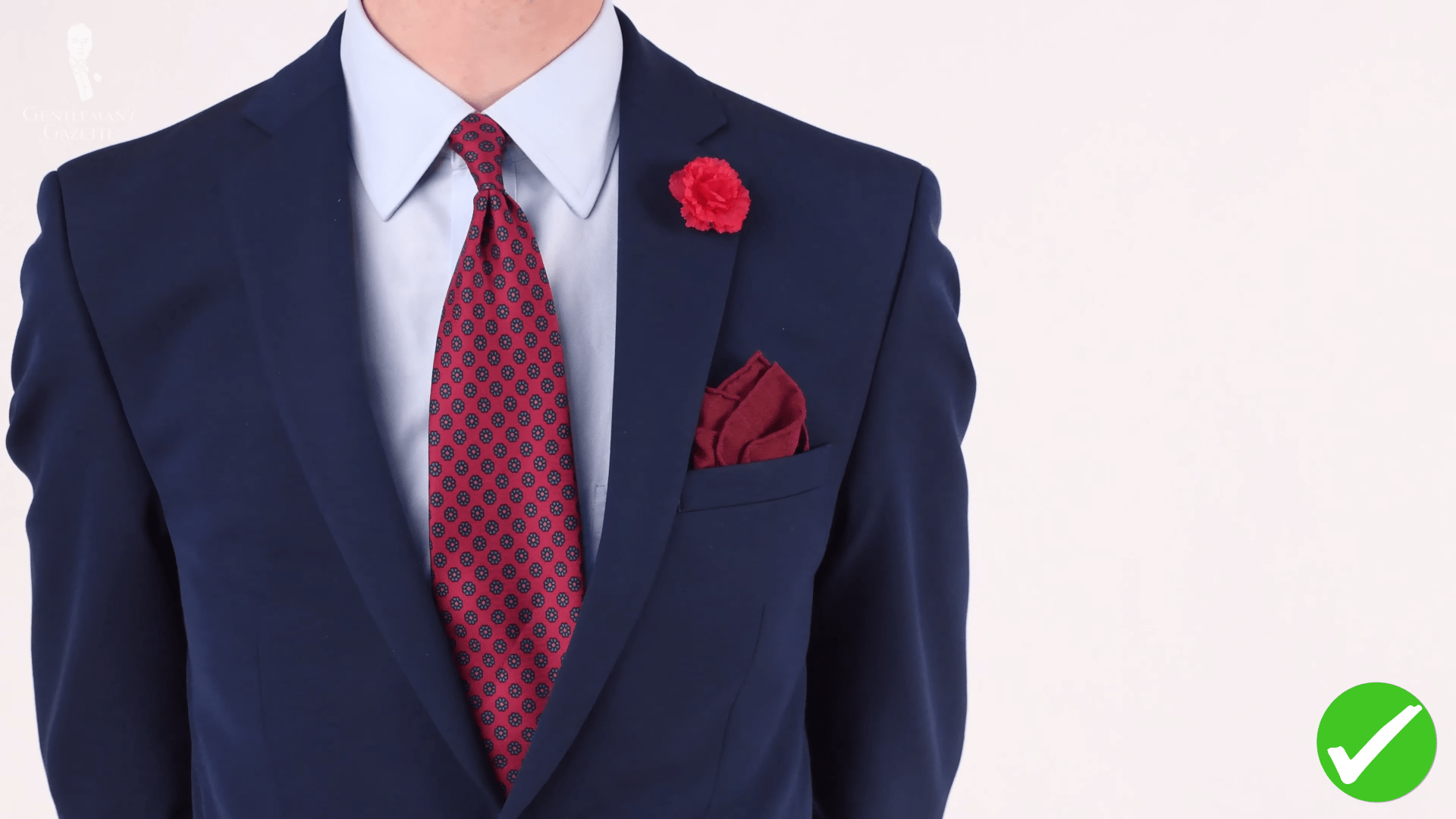 A well put together blue and red outfit

Staying with the torso for a moment, lets talk about waistcoats and sweaters. If you want a larger pop of red, especially in the fall or winter seasons, you could try wearing a red-toned waistcoat under a blue jacket. Even classic British style, which is typically more conservative, will often take advantage of slightly more colorful waistcoats or odd vests. This will add some personality to your outfit while still being appropriate for most offices. The key here is just to cover up the bolder red hue with something in a more subdued blue. If you dont own a red waistcoat, red knitwear could also be an option. 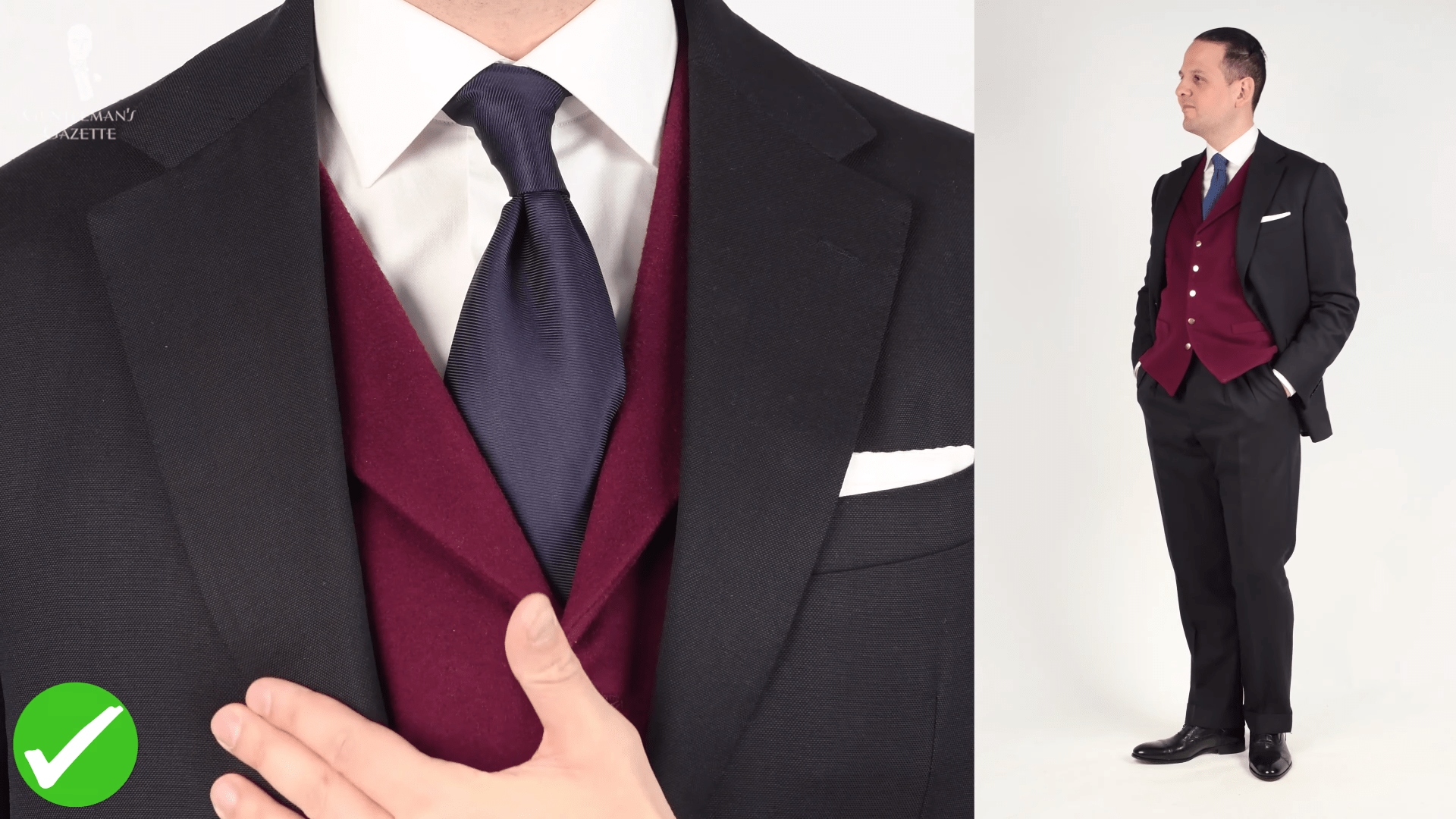 Lets move now to trousers. In warmer weather, chinos in a shade known as Nantucket red are a popular staple of preppy style. Just be aware that this close association with preppy style can make Nantucket reds seem a little bit snobby or pretentious, especially if worn in other areas like the UK. Otherwise, a darker maroon shade could work for almost anything, from corduroys to odd trousers. Of course, your options for blue pants in any shade are almost limitless. 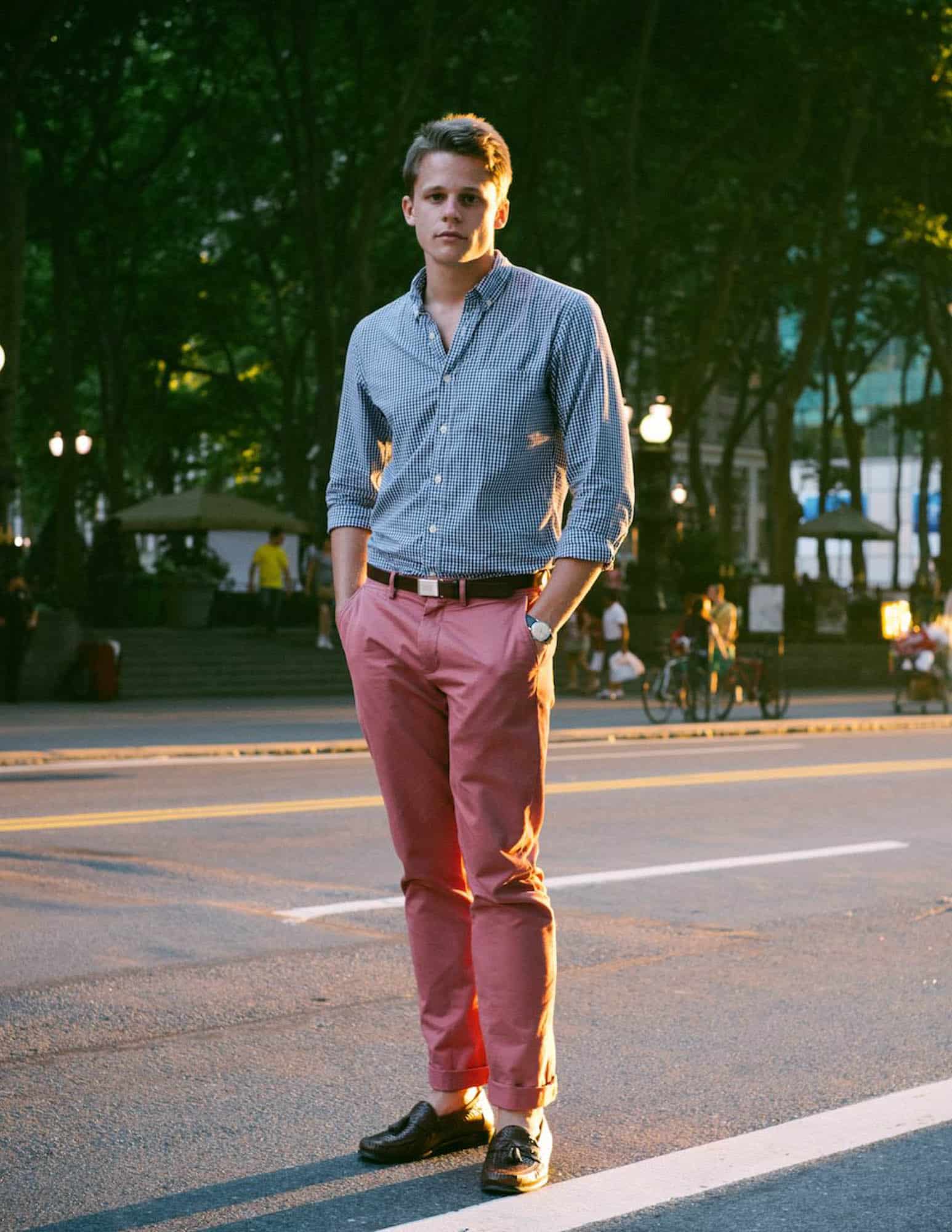 Moving on to jackets now (and as was also the case with trousers), blue on its own is a staple of almost any kind of jacket, whether that be a sport coat, blazer, or a jacket for a full suit. The bolder option would be a red sport coatprobably most appropriate for the warmer months of the year. Something like a red linen sport coat would evoke more of an Italian (or specifically, Neapolitan) style and could look smart with a white or off-white dress shirt and some blue pants. Meanwhile, darker maroons or burgundies could, again, be more appropriate for a wintertime blazer or sport coat. You could also seek out jackets incorporating both colors. A blue base with a red pattern over top would probably be slightly more subtle, and the reverse (a red base with a blue pattern) would be bolder. This is true for jackets as well as full suits. 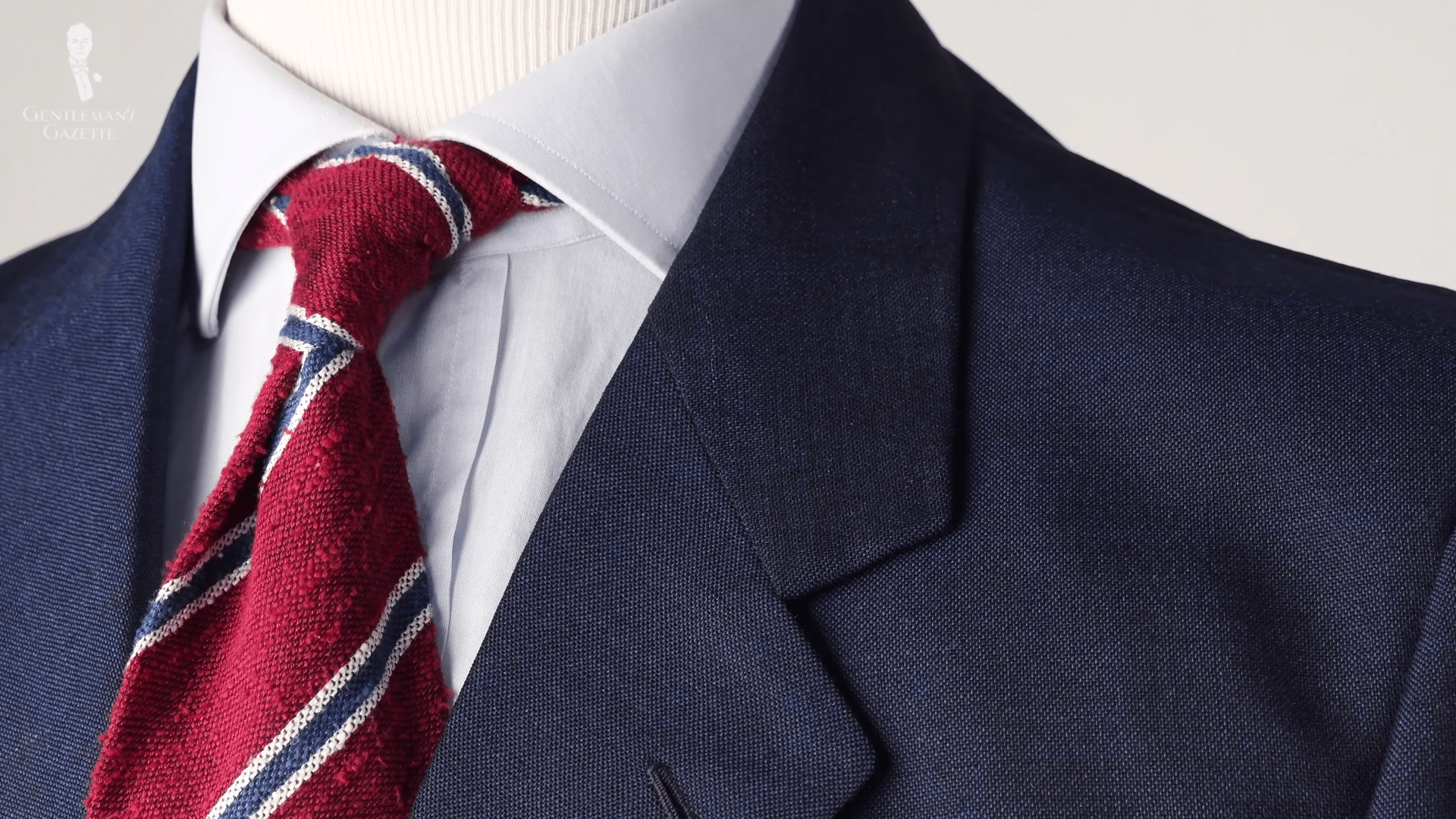 Similarly to how a red jacket would be a bold choice, so too would a red overcoat. Essentially, wearing red as any kind of outer layer is going to be more bold, especially in the wintertime. Red outer layers are definitely going to stand out more, so you could consider trying to tamp them down by having a few visible blue accessories like a tie thats showing, a scarf, or maybe some gloves. The guidelines we just discussed for patterns in jackets would also apply to overcoats, as well. 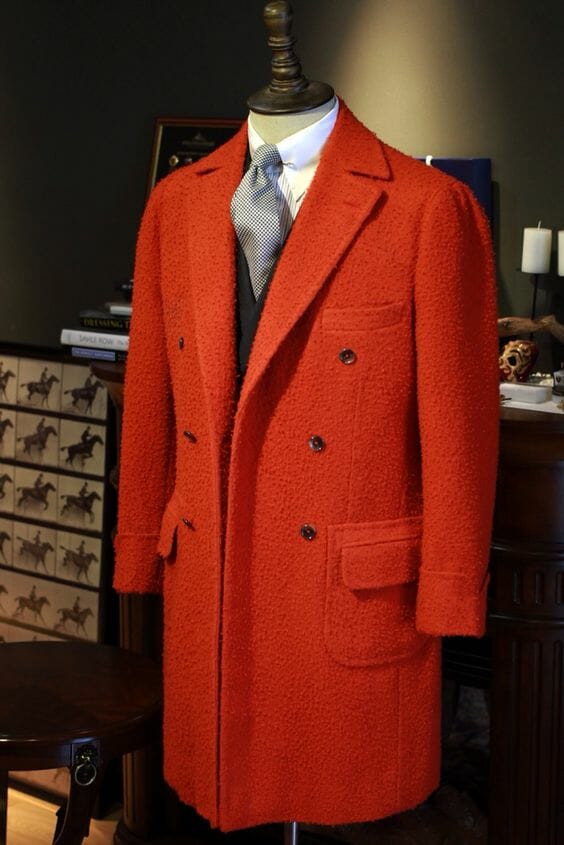 Casentino overcoat in red too bold!

A brief word here about hats: neither red nor blue is an exceptionally common color for classic hats in menswear. However, you will probably find a few more blue felt hats out there than you will red ones. More often, youre going to see blue and red as colors on hatbands, such as is often the case with straw boaters. 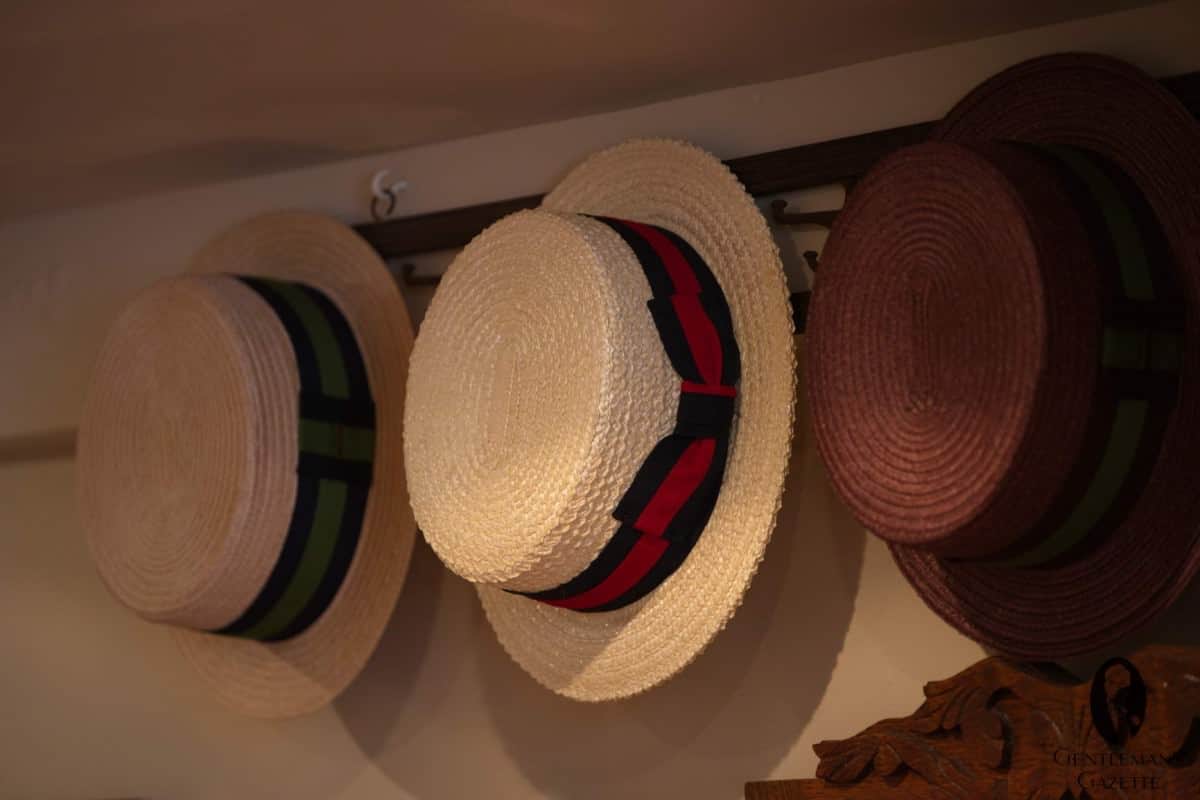 A selection of straw boaters, each with a multicolored, striped band.

Finally, lets cover shoes. Simply put, youre not going to find too many mens shoes in classic styles that incorporate both red and blue together. Even something like spectator shoes in dark blue and burgundy leather would be too bold for most men. With that said, each color on its own does have a slightly wider array of options in classic footwear. Neither color is terrifically versatile in shoes, but you can find darker oxblood shades in various styles, as well as blue suede shoes or even some blue leathers, if youre feeling a bit bolder. 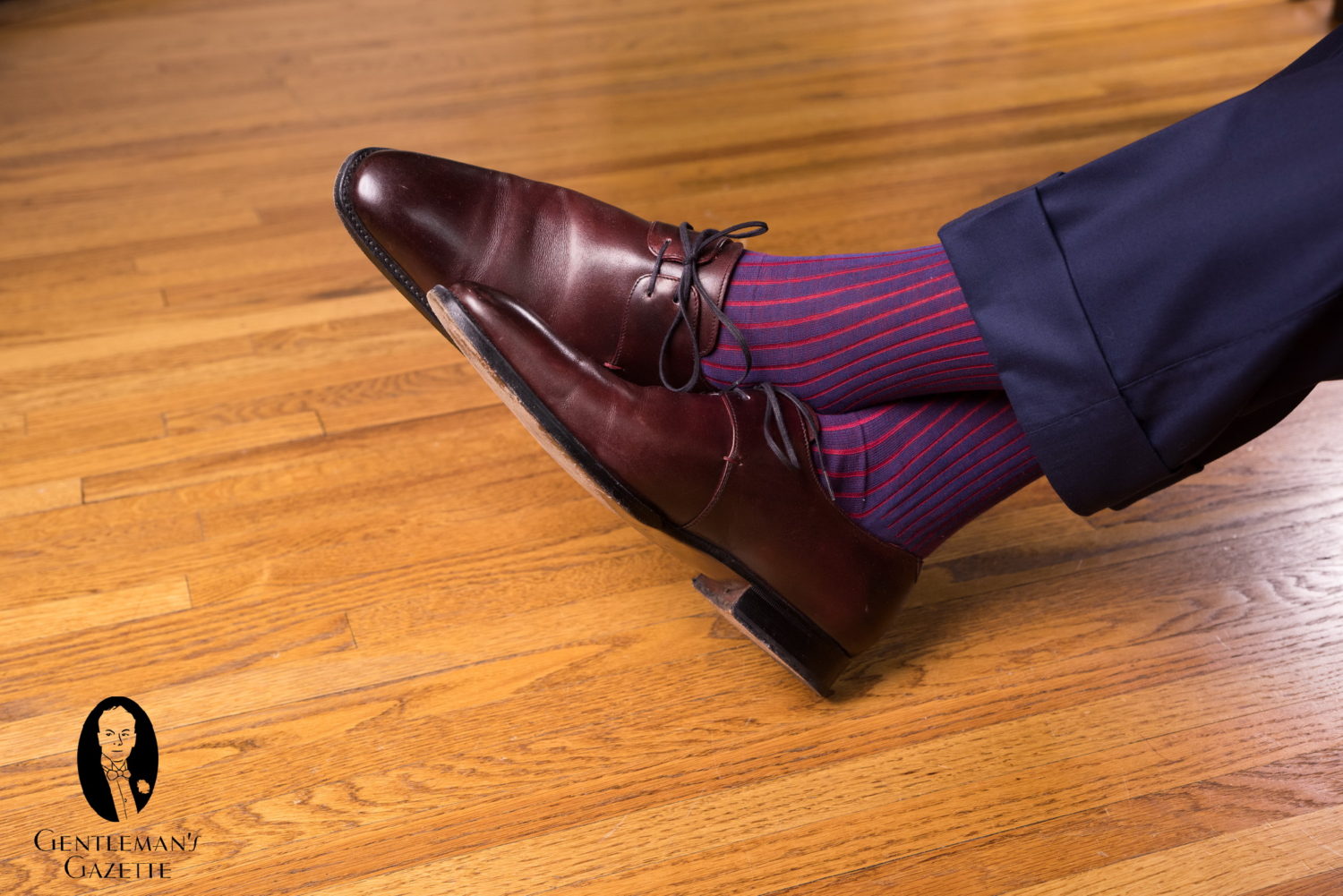 As you can see, there are several ways to pair blue and red together in menswear, ranging from the subtle to the bold. Blue is the classic and versatile menswear staple that will almost always provide a base, and depending on how bold youd like your outfit to look, you can choose how much red to incorporate.

How do you like to pair blue and red? Share your ideas with us in the comments!