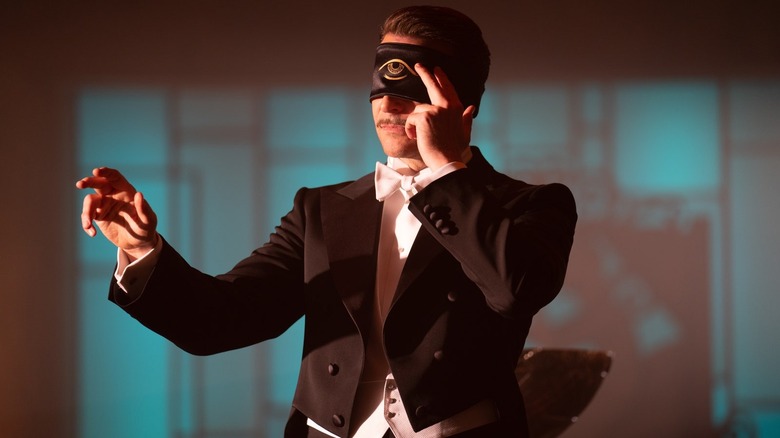 Luis Sequeira has quite an eye, making him more than a right fit for the world of Guillermo del Toro. The filmmaker often refers to his work as "eye protein," not eye candy. Sequeira, too, exhibits impeccable style in "Nightmare Alley," but it's all coming from character, not only atmosphere.

With a film spanning years and featuring a large ensemble, led by Bradley Cooper and Cate Blanchett, Sequeira had a tall order to fulfill for period pieces in "Nightmare Alley," and a large world to create. "We did an immense amount of research," he said. "What was great also was to be able to get to Europe and pull all these wonderful vintage and period clothing to dress all the background and creating a world with these beautiful pieces."

Speaking to /Film in a recent interview, Sequeira broke down the stylish suits and carnival fashion of "Nightmare Alley."

"We Built Probably 90% Of Everything That You Saw On Screen." 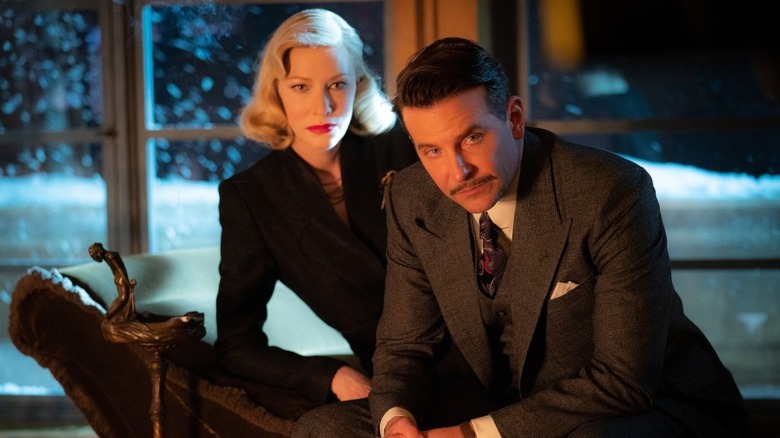 You get the opportunity to show quite a rise and fall for Stan. How'd you want to communicate that arc?

At the beginning it was all about fit, the changes in fit, the changes in color palette, the changes in old versus new, worn versus completely fresh, tweedy versus slick. At the beginning, the fit was looser, saggier, very well worn; which gave him a foundation of character. And then when he moved to the city, it was abandoning everything from that earlier part of the movie and creating this new character with only the finest in tailored garments, and ties, and silk, and hats. And so, that was wonderful to put together, what I would say, a collection of costumes that felt cohesive to this new person.

When he's performing those shows at his peak, was that vintage or created?

We built that. In actual fact, for the characters we built probably 90% of everything that you saw on screen. In many cases in the carnival, we had to contend with all the characters being in the rain, so we built everything and then aged that out to have the multiples ready. And then with the tails, we built those. In regards to the suits, we were fortunate to have some original 1939 deadstock UK government issued suits that we were able to pull patterns from, so that we were getting really the precise style notes and fit of that era for standing suits.

There was specific yardage that you had to make a suit, and it would get a seal of approval. It had never been worn, had original tagging all over it and we were very fortunate to have been lent by a private collector to duplicate them.

Since your work is inspired by character, and Stan is such a mystery at times, how'd he inspire you?

I think it was about consumption in the second part of the movie, where he was just consuming in the sense of providing this facade. In a couple of occasions you'll see a canary shirt in one change and a wild tie in another and that was kind of a little bit of little telltale signs that he wasn't all complete. At the end, it's this full circle story that couldn't get any worse than it does. I think it really was, in the second half, about the consumption of just finding that his life was closing in and he was just putting on the armor.

You worked on "Nightmare Alley" for two years, right? Where did your work begin?

I started in June 2019 and I went to Europe to start collecting clothes, doing flea markets and antique dealers, and buying fabrics that I wanted to use in the film. We had a pause in production in the fall for a few weeks. And then we shot our city aspect of the movie and then COVID hit and we were down, and we waited six months to start back up. And then we proceeded to do the carnival and had six weeks to prepare for the carnival, which seems like a long time but all of the prep work we had done prior, a lot of it was null and void. Those extras were no longer available, and so we had to refit those folks. We finished around Christmas, so it was a very long process and I was thankful for the time, because even in the downtime it gave me an opportunity to really move away from the city and really focus on the country aspect of the film.

"It Isn't Just One Period." 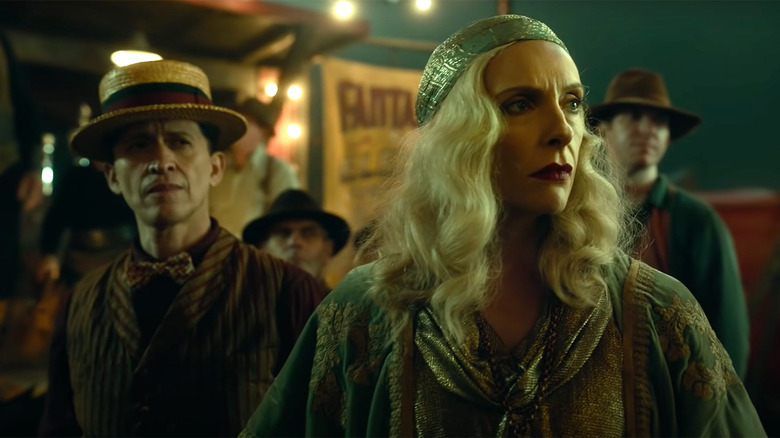 With the extras, especially with the different towns they visit, how'd you want to make them appear authentic?

I think what's great about the beginning of the movie are the faces of people and the looks that we put together. You could actually take a black and white photograph of those folks and you could actually physically think that you are looking at stuff from that time. I think the use of well worn clothing was instrumental in that. The different ways that men wear hats back in the day, the women's silhouettes that we use because we really ... It isn't just one period. Just now, you could be wearing a shirt from five years ago, you could be wearing your pants, your favorite jeans from 10 years ago and the same thing applied. So when I collected all that stuff and we were putting these pieces, these outfits together, it was really looking at a wide spectrum; almost 10 years of fashion and beautiful garments with beautiful textures to bring those together.

What changed in those 10 years?

I'm a bit of a hoarder, so I have a ton of catalogs from 1921 to '50s, and in essence, I have a representation of every two years. So we were able to really isolate, "Okay, what is this time? What is five years back? What happened 10 years back?" And it was very informative in the sense of what was chosen and not speed-balling ahead in time and likewise with the city work. I was fortunate to have collected some old Paris sketchbooks from 1939 collections and 1940 collections. And in the case with Cate, we were looking through them and looking at all the precise details; the yolk of her blouse. That was a detail that we saw and said, "Oh, wouldn't that be amazing."

Since you created 90% of the clothes, how many tailors and sewers were involved?

I had five tailor cutters and 12 sewers and we had outside contractors as well, helping us. We made lingerie, we made hats, we made shoes, ties. We basically built the lion share of the clothing.

Did you use techniques accurate to the time, making those clothes from scratch?

How do you create that aging?

"The Movie Was Really About Light." 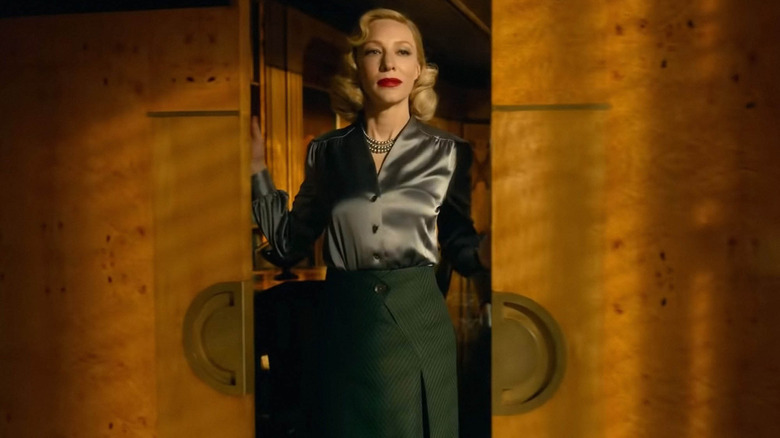 Did Guillermo also tell you not to approach your work with film noir in mind?

Yes. For me, that part of the movie was really about light. Available light and making sure that Cate came out of her environments, because they were very low light scenarios. So, the black suit had a pebbled quality to it that was able to lift off from those low light scenarios and the same thing with the silks. For me, it wasn't film noir, but I was thinking about infusing that glamor, color noir.

Obviously, Guillermo's attention-to-detail is on another level.

Any examples of how sharp his eye is when it comes to costumes?

There are a couple of pearls of wisdom that he taught me a number of years ago and he said, "We have a set but once we move into a closeup, there is no set. The clothing is the set. The clothing is what surrounds the actor's face, so we have to make sure that we have the greatest of details on every angle of that costume when we move in for their closeup." For me, that prompted just a shift. Obviously, I'm thinking about it, but I realized for him it was paramount. In fact, now I do 360 fitting photos and I'm able to pivot and see what the line is from the back, the side, and it's made me a better designer on that. That has been paramount in my design process moving forward since that time.

In that case, how else did you want the costumes to work in unison with [cinematographer] Dan Laustsen and [production designer] Tamara Deverell?

Always. Tamara and I would meet on sets and talk about what color the walls would be. And then I would bring in some fabrics that I was thinking about using and making sure that the tone worked. And then with Dan, it was about the light level and velvets are tricky, velvets eat light. Very often we'd have to go for something much brighter in order to then translate. We did a full test on velvets because velvet was a big part of the women's wear of the city. So, we did this huge velvet color test to see what tone and tonality we were going to be able to use to actually read. So, that collaborative relationship is very strong with the three of us.

A lot of costume designers say it's a special day when you see how an actor owns a costume. Did you have that experience?

Seeing Stan fully dressed in his three piece suit, coat, hat and walking in and Cate pulling away from her desk, I was just like, "Holy beep, this is pretty special." And then again in that carnival, just seeing that whole world building. It is what gives me my drive to do what I do. This is about creating something and putting it onto film for other people to enjoy and all those millions of little decisions we each make; Tamara, Dan, myself coming and seeing it on the screen. You always can see something you would like to change or modify, but that's the internal want to do better part of our personalities. I'm very pleased with what came out.

Read this next: The 12 Best Neo-Noir Films Ranked