Happy new year, friends!
I hope these early months of 2022 have been good, especially after coming out of the year we did. Did 2021 feel like a rollercoaster to you, too? It certainly started out in the valley for us and many other families with school-age kids who did school online. Later in the year as things got better, the overall sense was that of life being somewhat restored to us. We're thankful for that, and for so many other blessings and gifts, and I know this may not have been the case for everyone.
We were busy, also, in spite of what the long stretches between blog posts might have indicated. Healthwise, we were well, but we were navigating new things. In the fall, the kids started the school year in-person, and that took some adjusting, too, particularly after so much remote learning in the year before. It's funny that even normal isn't quite that, after long enough of abnormal.
What have I been busy with? Well, for one, over the last four months, I sewed garments. Again, quasi-normal, if you guys remember the mad race when my kids were little, to clothe them in summer wear before they hit each subsequent growth spurt. And there were the tween years when homemade was awkward for them because bodies were changing and no one was really sure what felt or looked good. I sewed just their Halloween costumes then, and tried to stay in the moment for as long as I could, knowing that even that phase had an expiration date not too far down the road. Then came the transition through middle school, and Narnian and Barbie princesses faded in the shadow of pop stars, online communities, wry humor and satire. The kids got together with friends to invent Halloween disguises and quirky book club costumes with a glue gun and a bit of magic known as Improvisation. I poked my nose in to check on them every now and then, but they assured me they'd got things covered. Mostly.
And my sewing machine, that manic workhorse faithfully churning out garment after garment of all shapes and sizes for over a decade, exhaled. I settled into a new creative chillness: stuffed toys, the occasional face mask, maybe mending a rip in someone's leggings.
Then: high school.
I'll say this before we get to the details: so much of life is a cycle. Apparently, with teenagedom - especially later teenagedom - comes a reinvention of one's fashion sense, and I found myself once again in the fabric stores among the sheers and lace and satins (there's an entire aisle dedicated to cosplay fabrics, I've learned). The children - not quite children anymore - have now got important places to be, places with dress codes, specifically. Cocktail dresses for school dances and all-black floorlengths for fancy concerts, for instance. A decade ago my sewing room floor was a riot of polar fleece (to stave off hypothermia) and upholstery accents (to look medieval) and everything was swirly swishy semi-circular skirts with underlays and overlays; now it's chiffon and bridal satin and bust darts (bust darts! Where have the years gone?) and clean lines and You Can't Let Me Look Hideous, OK, Mom?! It's been a whirlwind, this return to what-once-was-and-yet-is-utterly-new. Normal after a hiatus is usually anything but. A recurring theme, it seems.
Last October, Jenna needed a homecoming dress. As always, my first instinct is to hit the stores. Sewing is a hugely romantic notion, but people often forget the precarious quest for fabric in the particular shade of a particular color, the ten thousand muslins, the last-minute hem-job executed in the wee hours just before sunrise because we'd underestimated (again) how long garment-making actually takes.  I love handmade, but sometimes store-bought can look really good from this side of the throat plate.
Anyway, we trawled the internet, Jenna and I. I didn't even know what a "homecoming dress" should be, having myself never attended a homecoming anything, because we there's no such thing in Singapore. Had to deduce from what we found on 'customwear' sites what the rules were: not as fancy as prom, but nicer than what you'd wear to church on Christmas Day was my eventual interpretation.
The prices, though! For so little actual fabric! It was unbelievable.  As I scrolled past tinydress after tinydress, in all their 57 color options, all that registered was the non-zero probability that alterations would have to be made even if we'd ordered one in Jenna's exact physical dimensions. After waiting 4-6 weeks for it to arrive, at that.
I surrendered. Handmade it was, then.

This was our inspiration piece, by the way. 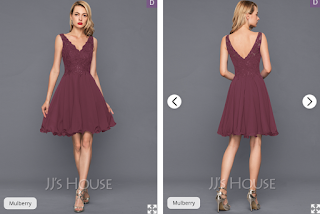 In keeping with her meticulous appreciation of the nuance in color, Jenna expounded at length the exact shade of darkish-reddish-wine-ish-not-purplish-ness she preferred. Naturally, it didn't exist in the fabric types we needed, but we did our best.

The lace overlay made me feel somewhat nostalgic - how many princess costumes had I made which looked like this?

And yes, there's a mask to match, because it was required. A sign of the times, if ever there was one.

And I loved it. The outcome, the process, and especially reacquainting myself with drafting and turning numbers into three-dimensional drape on an actual person. On homecoming night, I took photos alongside the other parents and drove Jenna and her friends to dinner before the dance - two traditions that were also utterly new to me. What fun to see the smiles and excitement and goofy camaraderie. What a gift that they were able to have this, at the end of a bizarre, uncertain year. How wonderful to see hope and joy and mirth and celebrate precious friendship.
May you have see the same with the ones you love this new year!