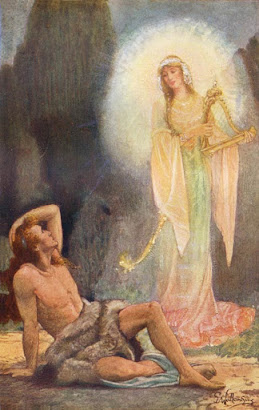 Reading the great cycle of Welsh epics known as the Mabinogion with the eye of a dreamer, we can discern an ancient account from the British Isles of the technique I call dream reentry – going back inside a dream in a conscious journey.

What follows is a simple retelling of the central part of a wonder story from the Mabinogion called "The Dream of Macsen Wledig". King Macsen is the Emperor of Rome, and the dream woman who becomes his queen is Elen of Britain.

The King Who Dreams, and Reenters His Dream

A great king is out hunting with his men when he is overcome by the sudden urge to nap, under the heat of the sun. His men make a tent for him with their shields, set up on spears, on the slope beside the river, and once the king is away, floating rather than riding towards a mountain upstream that seems to touch the sky.

Beyond the mountain, he comes to a great plain, and beyond this a great harbor where he crosses a bridge made of ivory to board a ship that speeds him to a beautiful island in a Western sea. He surveys the whole land, and enters a castle where he finds two handsome young men playing a board game that is something like chess but has different plays and much greater stakes. Beyond them, a white-haired man with the air of majesty is enthroned in a chair with two eagles, fashioning new pieces for the game. In front of the royal game-maker is a woman who shines like the sun, lovely in her flowing white garment and red-gold clasps and armlets and necklaces, flashing with jewels. She rises to greet the traveler, and they are joined in an embrace that claims the king's heart. They fit together, as one, on her throne.

When the noise of the world pulls him out of his dream, the king's vital energy stays there. His soul has been claimed. He wants only to go back inside his dream and live with his beloved. His followers become troubled when he no longer joins their pleasures or speaks in their councils. When they confront him, warning him it is being said that the king is no longer fit to rule, the king tells his dream. The wise ones of the kingdom confer. They advise him to send his men out to search the world, for three full years, to find the woman of his dream. Perhaps the hope that she can be found will enable the king to keep enough of himself in the body to perform his duties. Nobody questions that the dream woman exists. She is somewhere, because the king finds her there whenever he dreams.

The searchers go out, and they fail in their mission. Now the advisers have a better idea: the seekers if the king returns to the place of his dream, and sets out from there in the direction he traveled in his dream, perhaps he will recognize the landmarks of his dream and they will take him to the lady who shines like the sun. The king delegates thirteen envoys to try this. They find the mountain that touches the sky, and the ivory bridge to the ship that takes him to the Western island, and the castle where young men play a game while a kingly man makes new pieces....and the woman who shines like the sun. She is not impressed by their rank and power. She will not go with them. If their king wants her, he most come and pay court to her himself.

So the king takes the road of his dream, and finds her sitting with her royal father as he makes pieces for the game that is no ordinary game. The golden-haired woman leaps into his embrace. They make love that night, and are married, and the king shares his power and his possessions with her as she directs.

Just as she gave the king a road to her in his dreams, it is now the pleasure of this Lady of the Ways to make roads across the land. The has three castles built in different parts of Britain and has great causeways built between them. So she is called Ellen of the Ways.

Scholars discuss the history that has been shapeshifted in this tale, and mostly agree that a Spanish general in the armies of Rome - one Magnus Maximus - most closely resembles Macsen, although there are huge differences between their careers. Caitlin Matthews helps us to swim in the deeps of this Celtic tale of a dreaming king in her splendid book King Arthur and the Goddess of the Land.

If we will only go deep enough into this story, we may discover, like the king, the way to bring soul back into the body and marry the worlds.    The map is inside the dream. Though the road brings love and healing and power in the physical world, the road moves through two worlds.

When the trackers, and then the king himself, go back to the place of the dream, they also practice dream reentry. The mountain as high as the sky is no worldly mountain; the bridge of ivory is no ordinary gangway. The most important part of the journey to the beloved of the soul - who is also a goddess of the land, and in this version the Sovereignty of Britain - is a dream journey.