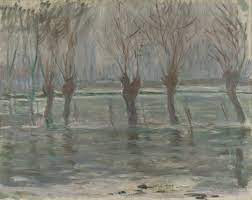 It is said of a people who live east of Fez that they value poetry above all other human activities. There was a man among them who despised poetry. He said it was for the weak and for women. Bashir was a warrior and a hunter, sudden and violent in his moods, given to strong drink.

One night he was caught by a dream. The moon threw down a lasso of light. It pulled him down, spilling his wine, extinguishing the lamps. He fell into blackness that became the sound of rushing water, more water than the village had ever seen. When his sight cleared he saw that the little river where the women washed clothes had become a great torrent, waves rising mountain high. The sky sheeted heavy rain. There was no horizon except endless water.

In the savage flood, he saw trees and houses, donkeys and camels, carried away, and a woman he might have loved and a man to whom he owed money and the witch who sold him a charm against the evil eye after setting the curse on him, and a fat grafter whose neck he had broken though the thief had been buried for three years. He wept when he heard the howls of the sight dog who had hunted with him. Then the flood took him too. He had nothing to hold onto, nowhere to stand. This was the end of the world. His life memories swirled in his head like water going down a drain.

He was thrown up by an immense wave, and hurled down with bone-shaking force. He tasted sand and rust. He opened his eyes. He smelled coffee and warm bread. His woman was making him breakfast. He brushed this aside, more gently than he might have done on another day. This gave her the courage to ask if he was well. She did not say that the noises he was making in the night were not human, or even bestial.

"I've been waiting for you," the shaykh told Bashir.

"I dreamed of a flood. It took the whole land. It was the end of the world. Does it mean I am going to die?"

"You have died already, my son. Welcome to paradise."

Bashir gaped, then looked carefully around. The landscape was surely the same as yesterday, and the smells, and the hot dry wind gusting from the south. Yet there was a subtle shimmer to things, as if nothing was quite fixed or tethered to the earth. The wind carried the sound of stringed instruments. With the music came birdsong that became words. The words shook their wings inside him, then took flight from his lips.

"You broke the vessel and it became wine."

Bashir sat open-mouthed, shocked at what he had released.

Omar the blind sipped his glass of red tea and made a sound like a kiss with his wet mouth. "My friend, everything will be different. You have been made a poet. It is known that all poetry comes from flooding."