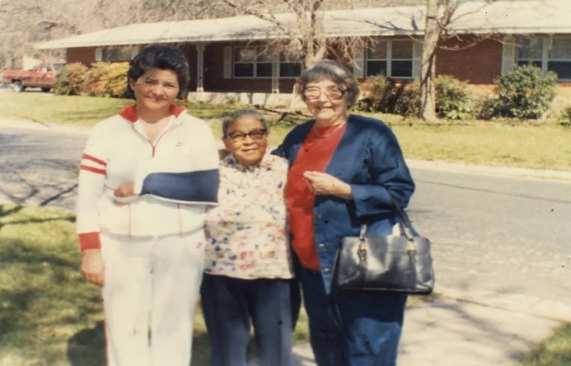 Nuestros antepasados would ask on January 1, “por donde entró el año?” They were reminding us to pause and marvel at the magisterial movement of the Creator’s hand over the new horizon and welcome the ancestral wisdom flowing through us. For me, 2022 came in from the East, bringing understanding of things as they are so that we may continue to generate the kind of life that elders like Manuela Solis Sager envisioned and sought.

Manuela Solis Sager, a life-long social justice activist and a member of the Communist Party USA for over 60 years, was raised in Laredo, Texas, by parents Joaquin Solis, a coal miner, and Angela Barrera, a home worker and teacher. She began her organizing work as a teenager calling on cotton pickers from Laredo to walk off their jobs in protest of a decision by farmers to reduce the rate of 22 cents for 100 pounds of picked cotton (by 13 cents). The strikers persevered, with their employers ultimately increasing the rate to 35 cents.

In 1935, Manuela joined fellow unionists—her dad, uncles and her soon-to-be husband, James—in organizing a strike by Mexican onion workers. James had participated in the union movement against tyrannical banana producers in the Caribbean and Central America while her elders had maintained workers’ organizations in the coal mines outside Laredo. Meanwhile, Manuela joined local Laredo women in forming a union affiliated with the International Ladies’ Garment Workers Union. Recognizing the leadership potential of Manuela, the Union de Jornaleros sent her to study at La Universidad Obrera in Mexico City with a scholarship that they put together from their meager earnings.

When Manuela returned to Texas, she and James settled in San Antonio where they joined another Mexican upheaval, this time involving garment, pecan shelling and unemployed workers. Soon thereafter, Manuela and other union leaders from throughout Texas met in Corpus Christi in 1935 to unite the different local workers’ causes in a general organizing effort in the Rio Grande Valley to be led by the South Texas Agricultural Workers’ Union (STAWU). Manuel and James, the appointed organizers of the STAWU, formed unions throughout the Valley with the help of local activists, but hostile law enforcement officials and farmers forced them back to San Antonio where they participated in one of the largest strikes of Depression-era workers made up of about 12,000 Mexican workers, the majority of whom were women.

The legendary 1938 pecan shellers’ strike was led by Local Union 172 of the United Cannery and Agricultural Producers Workers’ Union (affiliated with the Congress of Industrial Organizations) which included the noteworthy Emma Tenayuca as the strike negotiator. A state agency, the Industrial Commission, called on employers to increase the low wages (3 to 4 cents per pound of shelled pecans) on the grounds that they were violating interstate commerce laws. The organizing and negotiating success, however, was viciously recompensed with a reign of terror against the workers by local police, as well as a decision by the employers to mechanize the industry, displace the great majority of the workers and deplete the membership of the union.

Refusing to give up, Manuela continued with her activism for workers and their families. James Stanford, a longtime friend and fellow traveler, wrote the following about her continuing activism:

“She was active in all the major struggles against racism and oppression and for peace and social justice that took place in her lifetime. She supported the Raza Unida Party, engaged in efforts to end the war in Vietnam, and walked the streets of San Antonio with petitions to urge the impeachment of Richard Nixon. She was active in Latin American Assistance, an organization of humanitarian aid and solidarity with people fighting oppression in Central America. She also assisted immigrants from Central America fleeing oppression. Being a lifelong advocate for civil rights, she joined the fight to free Angela Davis, an African American member of the Communist Party and part of the Black Panthers who had been framed and imprisoned unjustly. In 1983, she joined with a group from San Antonio on a bus to Washington, D.C., on the 20th anniversary of Martin Luther King’s March on Washington. In March 1984, the National Association for Chicano Studies [NACS] meeting in Austin, presented her with a plaque in recognition of her outstanding service to the Chicano community” (Stanford, 1969).

“I also want to say something to the Mexican woman and women in general.  I did not write this, I am speaking from my heart. I want to say this, that just like we struggled, you need to continue fighting and moving forward with us because . . . I am already close to 73 years of age on April 29.  I want every one of you to continue in this fight, by helping the working class and joining in the workers’ struggle!” (Calderón and Zamora, 1985, Translation by Zamora).

May we embrace the understanding of life as it exists and our responsibility to change it that Manuel Solis Sager and other historical luminaries recognized and acted upon every new year of their lives.

Revolve’s Best-Selling Dress Is The Way To Do Sexy Black Tie⁠—On A Budget
Jun 29, 2022