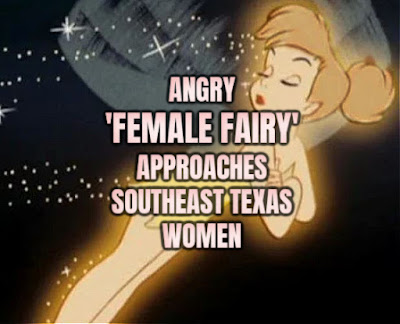 Our eye witness reports have given us knowledge of a small humanoid, possibly a sloth or alternately a primate that is also demonstrating the ability to project images.  Why this is important is that threse creatures do not project images larger than themselves.  Now we have spotted multiple images put out by the giant sloth and they are all large enough to emulate even a conquistator, a not deer and of course little red riding hood.  Obviously images are maintained through the generations.
By obvious extension, projecting the image of what we see as a fairy that is within that eighteen inch envelope is no longer quite so impossible.  It is then completely reasonable that all our little people are again presenting images such as gnomes, fairies, elves and whatever else works.  They are also intelligent as well, use spears to take down game and from folk lore, have interacted to acquire food.
In this case we have two adult witnesses confirming the image with each other who thus cannot pretend it did not happen.  Let us stop pretending all this is imaginary when it clearly is not.  Too bad that they cannot quite do Tinker Bell.
.
Angry 'Female Fairy' Approaches Southeast Texas Women
Monday, June 06, 2022
A woman and her grown daughter are sitting in their car, when they notice a 5-6 inch flying 'female fairy' fluttering near them. Its facial expression was that of anger. What was this?
The following comment was recently forwarded to me:
"In 2004, in southeast Texas, my grown daughter and I were seated in the car in late summer. The heat was rather unbearable, so we were letting the cars AC cool the interior down before we headed home from the market.
Prior to this event, neither of us believed in fairies or pixies. We read about such beings as folklore, or mythical. But what was about to happen changed us forever! Here we were, in the land of rattlesnakes and armadillos.
We sat talking, my back was to the side window. My daughter suddenly went very still, and said, "Mom, look behind you." Very slowly I turned, and saw nothing. But, suddenly, I saw it too! It flew right at our front windscreen. A human-looking creature, approximately 5 to 6 inches long. It had a gossamer-like wings that spanned probably 6-7 inches wide. And its wings beat quite rapidly, like a hummingbird's. It was directly in front of my face. As I suddenly saw it, it poked its tiny face at me, craning toward the window. I was in shock! Think of the last time you saw a fairy painting. You probably are remembering a creature that was wearing some sort of garment, that was revealing its rather lengthy legs, and its bust or chest. Yep. Tinkerbell's dress, but hers was nicer. This little creature's clothing was an amber and wood-colored costume. (And before you ask, neither of us were under the influence of either alcohol or drugs.) I am saying this was a female creature, due to her bust. And she was obviously very upset. Her tiny face was scrunched up in a deep frown. And although we couldn't hear her in our closed up car, she was very sincerely giving us a lecture. She was quite angry!
After she did this for several seconds, she looked over at my daughter, shook her head, and turned and flew away. "Mom, did you just see what I saw?" My daughter asked. "Yes, I did," was all that I could say.
When we came out of our shock, we talked about this little creature. We still do, 17-years later! Everyone we have mentioned this to, thinks we lost our minds. And I might have thought it was some kind of heat induced delirium, if not for the fact that my daughter saw it too. After this encounter, we have both been seriously watching for another event, or even someone else who might have ever seen them here in America. So far, no such luck. So, I question, are there others here in the US? I now live in West Virginia. And if they were native to this country, why doesn't anyone else here talk about them? And if they aren't, where do they originate from? And how might they have ended up here?" TW
Have you had a sighting or encounter?