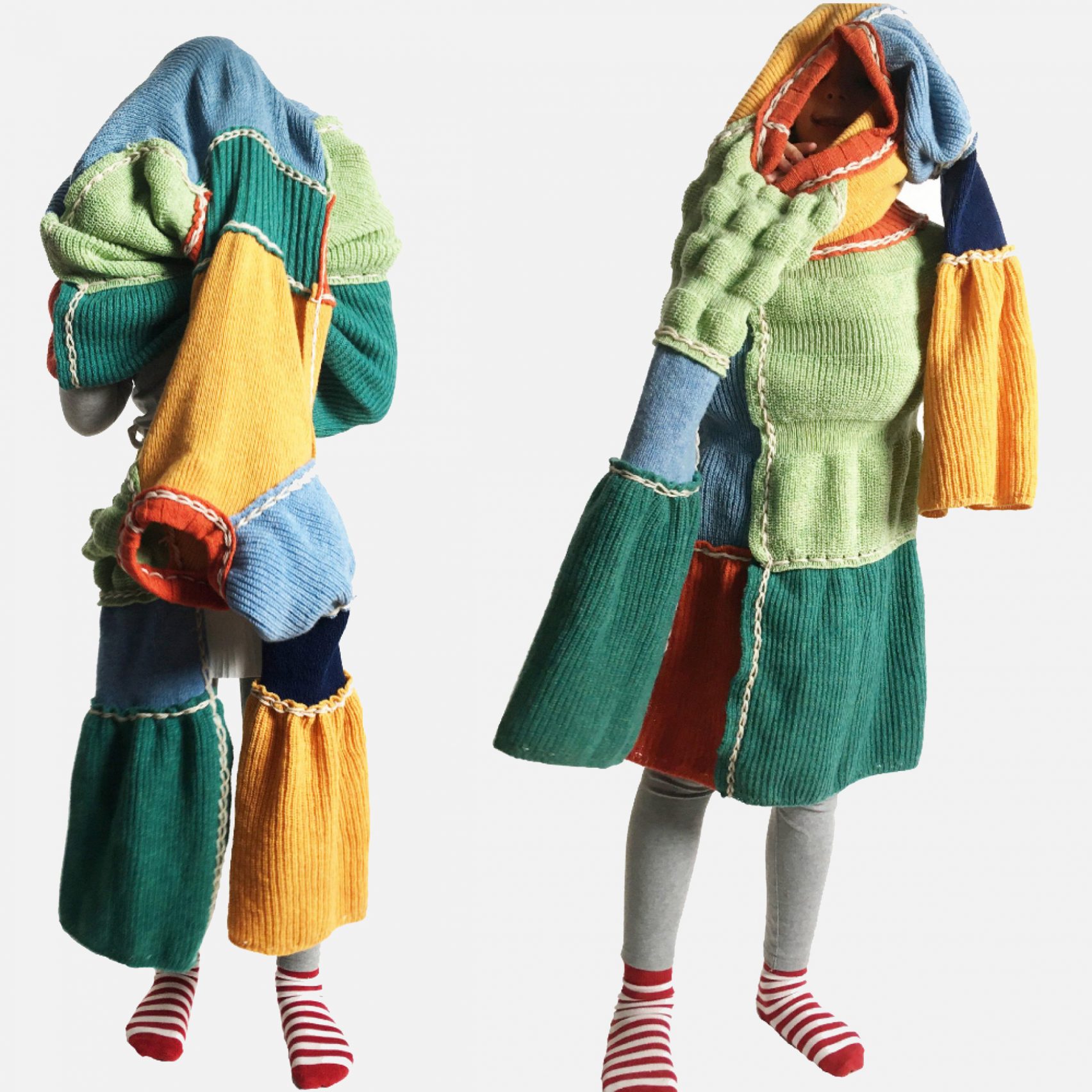 Design studio Almaborealis has created a modular DIY kit containing pieces of fabric in an easy puzzle format that invites children to sew their own clothes.

Now called Puzzleware, formerly known as Convertibles, the project has been shortlisted for this year's Dezeen Awards in the wearable design category.

Almaborealis founder Maija Nygren took cues from early learning theories, such as loose parts play, to design a tactile kit for children aged four to 12 that encourages them to make their own clothes.

Puzzleware kits include pieces of colourful Scottish lambswool, which Nygren says are 100 per cent biodegradable, designed with lace holes so that children can sew the fabric together to make themselves a garment.

Each kit comes with a chunky blunt knitting needle and a Learn to Stich card printed on recycled paper, created to be accessible to children.

"The idea for Puzzleware was born through a combination of factors," Nygren told Dezeen.

"I realised that my now eight-year-old daughter hadn’t stitched a single stitch during her time in school, and began to research the sustainability aspect (or lack thereof) of manufacturing processes for fast fashion clothes," she added.

"This huge industry is creating a vast void where home sewing and clothes-making once was."

"This generation and those to come are losing not only the skills to make clothing, but all that comes with it; understanding the value of materials and the skilled makers of our clothing, and where these everyday items come from," explained the designer.

Having previously worked in children's theatre as a costume designer-maker, Nygren was interested in creating bright and bold clothing that would entice children visually, but also engage them in learning a new skill.

"I love very textured knitting that is squeezable, like a big hug!" said Nygren. "But I wanted my knits to give something more to children than just aesthetics or protecting them from the elements  – I felt that there was a great untapped opportunity to explore whether kids could better be involved in making their own clothes."

According to recent findings, arts cuts in UK schools have led to a rapid decline in the number of students taking part in creative subjects.

Nygren hopes that introducing children to creative projects at a young age will contribute to them gaining skills such as improved hand-eye coordination, dexterity and creative problem-solving. 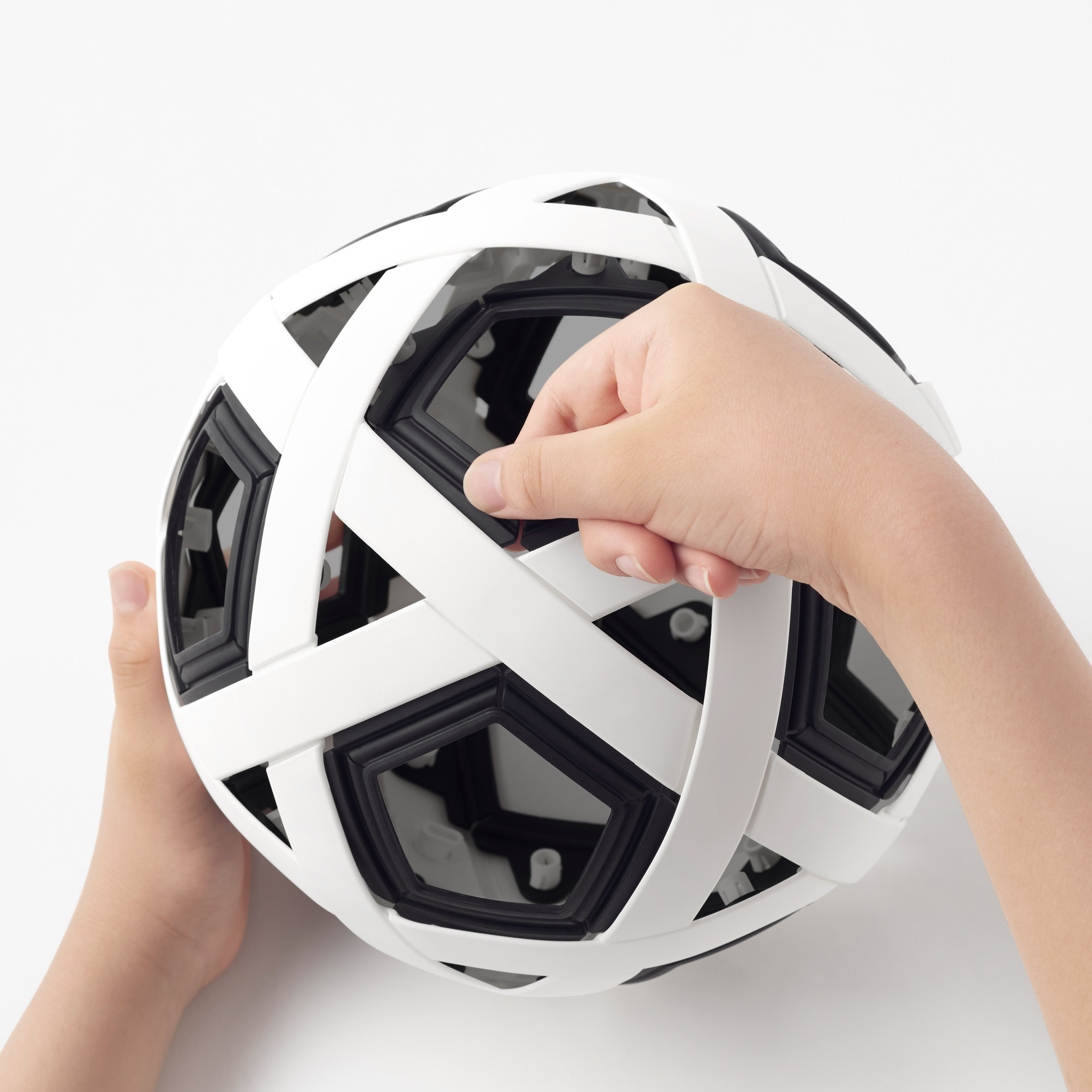 Puzzleware kits use the puzzle format for its flexibility, letting children extend their garments with new pieces of fabric as they grow.

Nygren also fitted each piece of lambswool with different numbers of lace holes according to their sizes, in order to avoid using fixtures such as poppers or buttons that might cause children discomfort when wearing their clothes.

"I needed to figure out how children could construct clothes in a frustration-free manner, with technical guidance, but maintaining autonomy and creative freedom," said the designer.

Puzzleware kits come in biodegradable packaging that was designed in line with the project's sustainability ethos, according to the designer.

"Providing children with an activity that supports lifelong learning and creative and critical thinking, as well as problem-solving skills, is another aspect of sustainability altogether,"  she added.

In 2018, designer and engineer Ryan Mario Yasin won a Dezeen Award for creating Petit Plit, a children's clothing line of pleated garments designed to stretch as the wearer grows.

The photography is courtesy of Maija Nygren.

Frette Makes One of the Best Pillowcases for Acne, Plus 6 Other Brands We Love
Jun 23, 2022