When Alaudin Ullah was growing up in East Harlem in the 1970s and 1980s, he loved hip-hop, graffiti art, and the New York Yankees, like many kids did at the time. Still, there was one readily evident difference between Ullah and his peers.

Ullah’s parents were from Bangladesh, making them the only South Asian family he knew in the Carver Houses, their public-housing project. Ullah had to explain certain things to other kids, for example that the garment his mother often wore was called a “sari.” But mostly Ullah did not dwell on his heritage. He became a comedian and actor, and distanced himself from his family’s past.

About the time Ullah hit 30, though, he became more curious about his cultural inheritance. How had he and his parents landed in New York, and Harlem specifically? What were the stories behind the other South Asians his family knew, scattered around the city?

“There’s a void in my life, and I really have to know who my father is,” Ullah says during “In Search of Bengali Harlem,” the affecting new documentary film on which he collaborated with MIT Professor Vivek Bald. “I want to find out about that world, that community they all had.”

In the film, Ullah and Bald explore that history, learning about Ullah’s father, mother, and New York’s South Asian community — and illuminating a much larger story about America, immigration, and family. Against the odds, many South Asians came to the U.S. and carved new lives for themselves out of fleeting opportunities.

That immigrant experience is now getting attention. “In Search of Bengali Harlem” will have its world premiere on May 14 at the CAAMFest in San Francisco, the leading Asian American and Asian film festival in the U.S. It will also be shown on PBS.

‘The goal of this film is to complicate and expand representation of South Asians in the United States,” says Bald, a professor in MIT’s program in Comparative Media Studies/Writing and a principal investigator in MIT's Open Documentary Lab.

A feeling of freedom

The film was preceded by Bald’s 2012 book, “Bengali Harlem and the Lost Histories of South Asian America,” published by Harvard University Press. The book and film have common roots, though: Bald and Ullah met in the 1990s (when Bald was working as a documentary filmmaker) and discovered a mutual interest in the subject. That helped inspire both Bald’s academic career and the film. Bald and Ullah worked on the project along with Beyza Boyacioğlu, a former staff member in the MIT Open Documentary Lab, who edited the film. Jazz musician Vijay Iyer, vocalists Ganavya Doraiswamy and Imani Uzuri, and Bangladeshi-American rapper Anik Khan, among others, contributed original music.

Ullah now recognizes that, as much as he loved the New York culture of his youth — hip-hop was being invented, graffiti art covered subway cars, and the Yankees were winning championships — he was ignoring a fascinating family story.

“I just totally abandoned and rebelled against anything that was Bangladeshi and Muslim,” Ullah says in the film.

Ullah’s family history is unusual, in part, because Asians were not officially allowed to immigrate to the U.S. between 1917 and 1965. Yet many seamen, facing miserable working conditions on ships, escaped at U.S. ports. They found work and started families, often with Black or Hispanic partners. These links between South Asians and other ethnic minorities are a motif of the film.

Ullah’s father, Habib Ullah, left a ship in 1925, found work in New York, and had a first marriage with Victoria Echevarria Ullah, who had immigrated from Puerto Rico; the couple had two children and he worked in restaurants. Then in the 1960s, after Victoria died, Habib Ullah went back to Bangladesh and found a new wife, Mohima, bringing her to New York, where she had two children, including Alaudin Ullah.

“Give me your hungry, your tired, your poor — that’s not really how it went down,” Alaudin Ullah says in the film, on a boat trip to the Statue of Liberty. “When I think about my father and his generation, who welcomed them? African Americans, Hispanics, Puerto Ricans, Carribean [immigrants], they welcomed them.”

Seeking out old childhood friends in the film, Alaudin Ullah talks to other families with similar histories. Eshad Ali, a Bengali man, and his Black American wife, Ruth, from South Carolina, ran the Bombay India Restaurant in Harlem, where customers included Miles Davis, Morgan Freeman, and Kareem Abdul-Jabbar. It was a new life for them both: Ruth could remain away from the Jim Crow South.

“I wasn’t in South Carolina,” Ruth Ali says in the film. “I wasn’t being watched. I felt a freedom.”

Kids forged their own identities in these situations. The Ullahs had friends, the Amin family, with a Bengali father and Black mother; the kids were raised Catholic, loved soul music, grew afros, and constituted the only Afro-South Asian family they knew in Staten Island in the 1970s, having to shrug off prejudice along the way.

“We heard a lot of that growing up, that we would not be able to achieve things because we weren’t bright enough, this is what the teachers were telling us,” Nurul Amin Jr. says in the film.

Despite such challenges, New York’s South Asians found their way in the city. Like other families, the Ullahs would head to the beach on the weekends — with Habib Ullah taking rice and curry along. Many South Asians would gather for events at the Pakistan League, a Manhattan club. (Bangladesh was once part of Pakistan.)

Many South Asians moved to Harlem. And while post-1965 South Asian immigration to the U.S. is now heavily associated with high-tech employees, this earlier wave of South Asian immigrants often worked in restaurants or other service occupations, trying to create better opportunities for their children — as did their spouses of color.

“That’s to the credit of Harlem as a place of possibility, both for members of the [Black] Great Migration, and immigrants of color,” Bald says.

The latter half of the film adds another element to the story. Having learned more about his family’s life in New York, Alaudin Ullah heads to rural Bangladesh to reconnect with his mother’s family. Although they have not seen Mohima Ullah in decades, the relatives have a trove of memories to share — and startling pieces of family history that help explain why she emigrated.

That willingness to create a new life in New York made Mohima Ullah’s life more secure in some ways, but at the cost of extreme separation from her former world. “In Search of Bengali Harlem” underscores the sacrifices immigrants make — and the strength they so often show in the process.

“She deserved to be treated like a queen, and I wish I could have given her more,” Alaudin Ullah says about his mother, near the end of the film.

Still, Alaudin Ullah and Bald have given Mohima Ullah a prominent place in their film. And while she was alive, Alaudin Ullah also gave her a trip to Yankee Stadium for its last game before being torn down, in 2008. “Yankee Stadium is so beautiful,” she told him. Symbolically, the visit showed that her family, at least, had become fully settled in the U.S.

“I wanted my mother to experience what I’d felt when I was 9 years old,” Alaudin Ullah says. “I took my mother’s hand and walked down to the box seats. We were right behind the fence. I showed her home plate. … Look, Ma, this is home.” 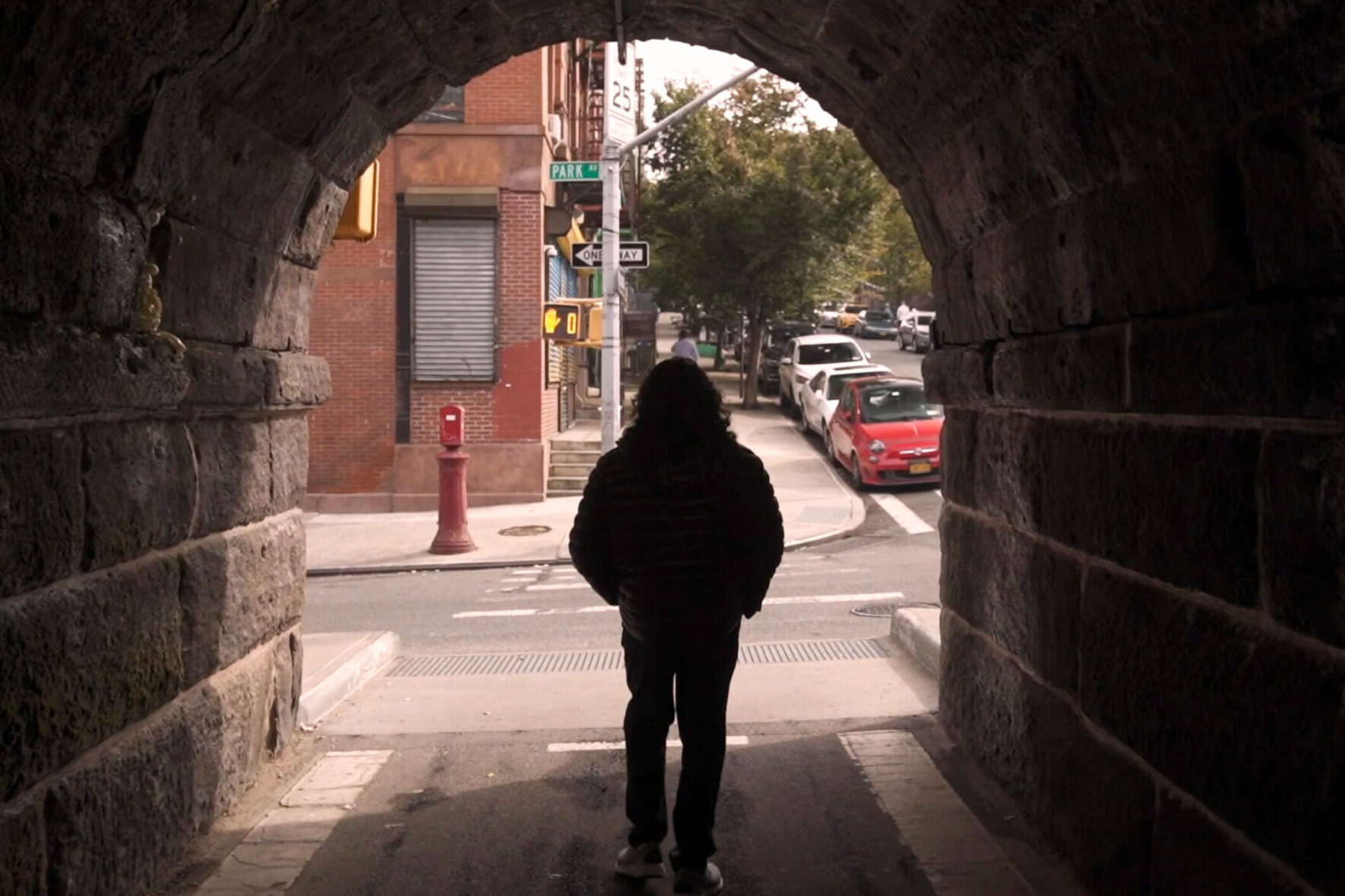