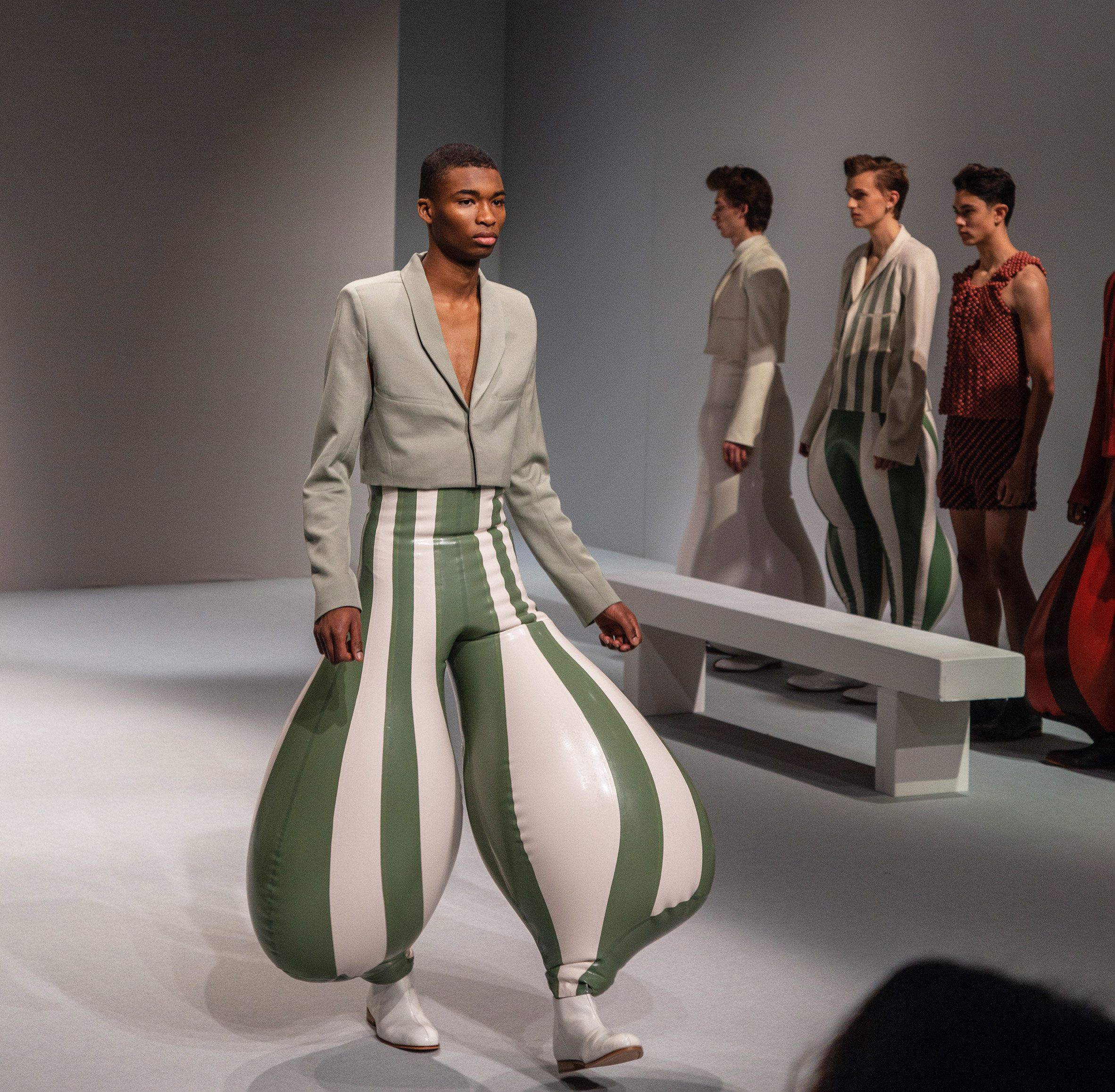 Yesterday, designer Harikrisnan left social media buzzing with his eye-catching collection for the London College of Fashion graduate fashion show. The up-and-coming menswear designer sent models down the runway in sculpted latex pantaloons that would blow even the most ostentatious parachute pants out of the water. Coming in a variety of shapes from ivory teardrops to exaggerated striped calves, the inflatable trousers' ridiculous proportions made a huge impact on the runway and an even bigger one online.

According to Harikrishnan, the idea for the balloon-like bottoms came to him while he was out walking his dog, Kai, one day and began to contemplate what the world might look like from the pup's perspective. Looking at the world from only a foot off the ground led the designer to contemplate the concept of distortion and the implications of making a familiar garment feel unfamiliar. Sculpting the initial forms in clay, the designer then cut thirty panels of Supatex latex and adhered them to each other to form each pair of pants, adding a seven-millimeter valve at the bottom to allow for easy inflation.

Despite what you might think, Harikrishnan claims that the inflatable pants are super easy to slip into and take only about two minutes to fully deflate. Plus they have the added benefit of making your stride feel "like you're floating."

Harikrishnan on Instagram: Graduate collection Lets Put Him in a Vase from LCFMA in-house presentation. This lineup was the culmination of some wonderful

Harikrishnan on Instagram: @joshuajsmall in my favourite look from the M A Collection. @rayxchung Special thanks to @hncatherine420 and @supatex for all the

Harikrishnan on Instagram: Lets put him in a Vase. @joshuajsmall in red and ivory inflatable trousers. @rayxchung . Special thanks to @supatex for their amazing

For many, Harikrishnan's whimsical pants brought back memories of another viral inflatable fashion moment from just last year. As a part of Central St. Martin's annual BA fashion show, Dutch designer, Fredrik Tjrandsen, wowed attendees with a collection comprised of massive wearable rubber balloons that deflated into a variety of tailored silhouettes. Videos of some of the dresses in action flooded timelines and garnered Tjrandsen thousands of fans including the likes of Billy Porter and Demi Moore.

At this rate, we may have the beginnings of a trend on our hands so it might be wise to start stocking up on air pumps now. We here at PAPER believe there is no such thing as an impractical garment, only impractical situations, so we've taken it upon ourselves to come us with 19 discreet occasions that would be perfectly suited for inflatable leg-wear:

2. When you skipped leg day but need to keep up appearances

4. An emergency flotation device in the unlikely event of a water landing

6. When you need a little extra personal space on your morning MTA commute

9. A Western-style showdown in a bounce house

11. The red carpet premiere for a gritty reboot of the Teletubbies franchise

16. When you're self-conscious about your cankles

18. An MC Hammer Meet and Greet

Learn Something New With These 27 Podcasts For Every Interest
Jul 01, 2022