When the first stop on our journey lasts well over three hours, I realize that my goal of experiencing the entire Connecticut Art Trail won’t be met this weekend. No surprise, really: Linking nearly two dozen museums across the state, the 250-mile “trail” is more a marketing and programming collaboration than an actual route that travelers are meant to follow. Still, it’s good to have ambition, even if I’m suddenly aware that mine will need adjusting.

Launched 25 years ago as the Connecticut Impressionist Art Trail to celebrate the state’s leading role in the evolution of American Impressionism, the project today carries a shorter name to reflect its many additional kinds of museums and sites. 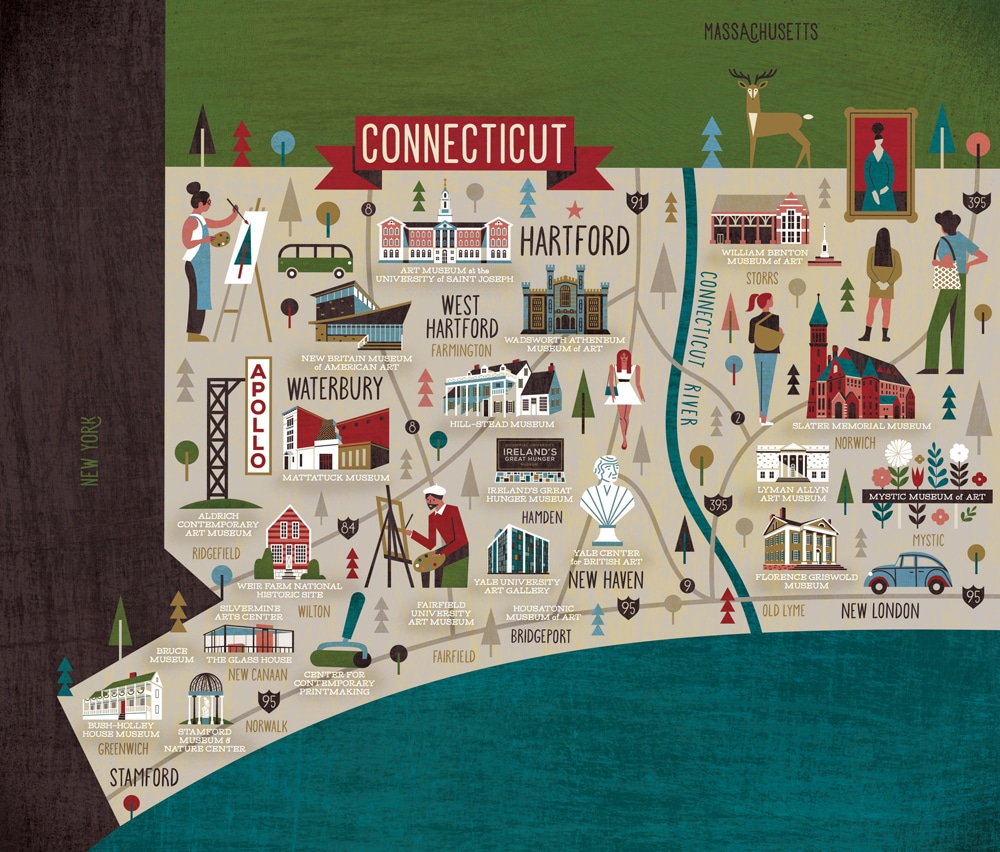 Scenes from the Connecticut Art Trail

One of the brilliant threads that hold this innovative tapestry together is a little booklet, the Art Trail Passport, which can be purchased online or at member museums for $25. Good for a year, it grants a single admission to each of the 21 member museums, essentially merging them into a single sprawling entity, a multicampus museum that would rank among the best anywhere. (There are also two affiliate institutions on the trail, New Canaan’s Glass House and Silvermine Arts Center, but they don’t participate in the passport program.)

Joining me on my Connecticut Art Trail journey is a friend who also happens to be an arts journalist. I’m always happy to have her with me, but even more so on this trip: Her knowledge is my guide. When she “oohs” and “aahs” over a particular work, I know I should pay attention.

Our home base for this arts-immersion weekend is the posh Delamar Southport, so we launch our excursion in the southwest corner of the state, where the largest cluster of member museums is located. And our first two stops, coincidentally, perfectly encapsulate the Connecticut Art Trail’s diversity.

We start at Wilton’s Weir Farm National Historic Site, where artist Julian Alden Weir made his summer home from 1882 to 1919. Weir acquired these 153 acres in exchange for a painting and 10 dollars. Classically trained, Weir initially disliked Impressionism—given how it de-emphasized realism in favor of light, color, and movement—but his attempts to portray this landscape helped change his mind. As we walk the grounds, we are surrounded by the same views that inspired Weir and his contemporaries to gather here to paint en plein air. Weir left an artistic legacy that was built upon by succeeding generations of artists, including his daughter, painter Dorothy Weir Young, and her husband, sculptor Mahonri Young, whose massive creations were fashioned in a multilevel studio that is now a fascinating part of the Weir Farm tour.

Less than 10 minutes’ drive from the Weir Farm, we discover what feels like the opposite end of the artistic universe, Ridgefield’s Aldrich Contemporary Art Museum. One of the least traditional museums on the trail, the Aldrich was founded in 1964. Although its focus has always been on contemporary art, the institution doubled down on that commitment in 1981, when it decided to sell its entire permanent collection and focus solely on exhibiting the most significant work being done by artists of the moment. Among the 8,000-plus artists to have one of their first major shows here are Eva Hesse and Frank Stella.

I love the Aldrich even before we step out of the car, as I spy Nari Ward’s 30-foot-tall sculpture Apollo/Poll in the museum’s backyard. There, the stand-alone re-creation of the iconic sign outside Harlem’s Apollo Theater sprouts from a grassy clearing as if from a seed accidentally dropped by a city visitor.

While many of the museums on the trail are broad in scope, others are uniquely narrow, such as Quinnipiac University’s Ireland’s Great Hunger Museum, which houses the world’s largest collection of art and educational resources related to the Irish famine of the mid-19th century.

The hubs of the state’s most celebrated Impressionist colonies, the Bush-Holley House in Greenwich and Florence Griswold’s boarding house in Old Lyme, have both been reborn as museums that are highlights of the trail. At the latter, now known as the Florence Griswold Museum, plan to linger in the main house, where visiting artists often signed their names and painted directly on the walls and doors.

On the Yale campus, the neighboring Yale Center for British Art and Yale University Art Gallery are notable not only for their impressive collections but also for museum shops full of eclectic and interesting books, games, toys, and all manner of creative goodies. Both also offer self-guided, app-based tours, which are a handy way to make sure you aren’t missing the must-sees. 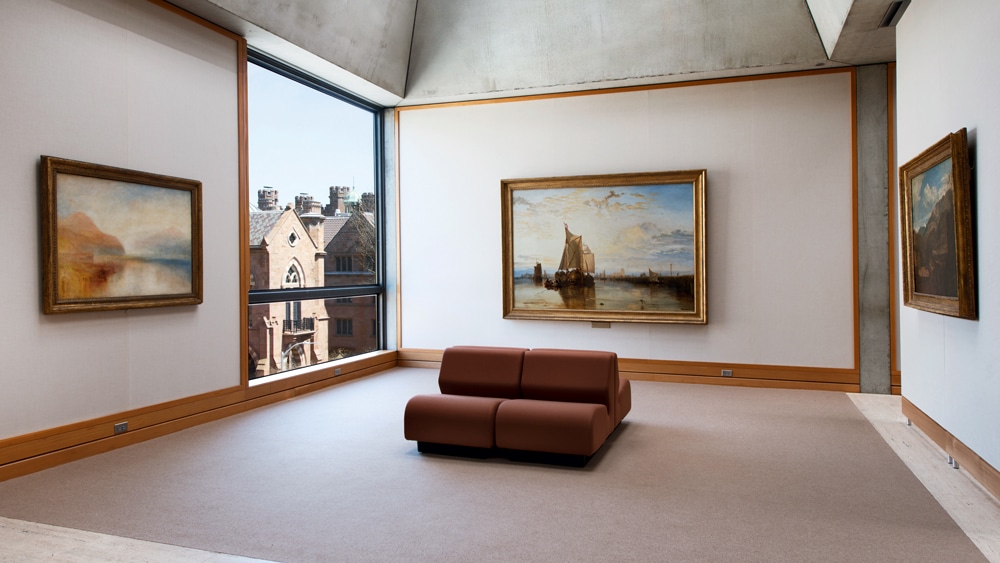 Luminous paintings by J.M.W. Turner are among the masterworks on display at New Haven’s Yale Center for British Art.

At the very heart of the Connecticut Art Trail is one of New England’s most underappreciated great museums, Hartford’s Wadsworth Atheneum, the oldest continuously operating public art museum in the country. Its collection has grown from 87 paintings in 1844 to nearly 50,000 works today, comprising not only masterworks by the likes of Caravaggio, Frederic Church, Matisse, and Picasso but also standout pieces by Salvador Dalí, Joan Miró, and Andy Warhol. But nothing at the Wadsworth makes a stronger impression on me than the building’s great marble staircase, emblazoned with the wildly colorful Whirls and Twirls, a geometric acrylic by Hartford native Sol LeWitt.

When we return each night to our room at the Delamar—a boutique hotel that is itself filled with original works of art—it is the unexpected treasures that run through my head: Apollo/Poll at the Aldrich, the cartoonish animals from an ancient bestiary at the Yale Center for British Art, the video installation by Bill Viola at the Wadsworth Atheneum in which a Christ-like figure appears to be drowning. And after three days, we head home knowing that the vast majority of the Connecticut Art Trail’s treasures still remain for us to discover. But that’s OK—our passports are good for a whole year.

Pixar Supporting Characters Who Deserve Their Own Movie
Sep 24, 2021

Use Your Imaginative Play to Make The Animals in the Zoo Come Alive From Playmobil #PLAYMOBILZoo
Sep 22, 2021

This Map Shows Where You Can Buy Legal Weed Now in the United States
Sep 21, 2021