For modern students, the spiral notebook has given way to the laptop and the pocket calculator has been supplanted by the smart phone. We’re not just talking about high school and college, either. Today, the education of even grade school children is intrinsically linked with technology. While some might question the wisdom of moving away from the pencil and pad at such a young age, there’s little question that all the kids stuck at home right now due to COVID-19 would have had a much harder time transitioning to remote learning otherwise.

But that certainly wasn’t the case when Advanced Keyboard Technologies released the Writer in 2003. Back then, five years before the first netbooks hit the market, you’d be hard pressed to find a laptop cheap enough to give to a grade school student. In comparison, these small electronic word processors could be purchased for as little as $150. Not only was the initial price low, but the maintenance costs were almost negligible. They ran for hundreds of hours on a standard AA batteries, and didn’t require schools to have any IT staff to manage them. Sure they couldn’t get on the Internet or even run any software, but they would give students a chance to hone their keyboarding skills.

In many ways, the Writer could be thought of as the successor to educational toys like the VTech preComputer 1000. A device that was simple enough for a child to use, but had enough similarities with a real computer that it has value as a training tool. To that end, the Writer took the concept even farther. It offered ways to check and improve the student’s typing speed, and even featured a simplistic file management system that allowed students to organize their assignments in custom directories.

When computers became cheap enough, devices like this naturally fell to the wayside. But interestingly, the story didn’t end there. It turns out many writers, professional or otherwise, have come to swear by this style of word processor. Easily obtainable on the second hand market, devices like the Alphasmart Neo are prized as a reliable way to capture thoughts on the go. With a battery life measured in weeks and no chance that your writing session will get interrupted by an ill-timed system update, it’s not hard to see why.

So what’s inside one of these educational word processors, and just as importantly, is it worth carrying one around to bang out the Great American Novel? Let’s take one apart and find out.

At the most basic level, the Writer is nothing more than a keyboard, an LCD, and some simple electronics to glue them together. There’s no removable storage, no rechargeable battery, there isn’t even a backlight for the display. You put three AA batteries into the back of it, hit the power button, and within a few seconds you’re writing. All of your work is saved to battery-backed memory, and when it comes time to upload your literary masterpieces to something a bit more capable, the Writer is designed to send the text out over infrared. 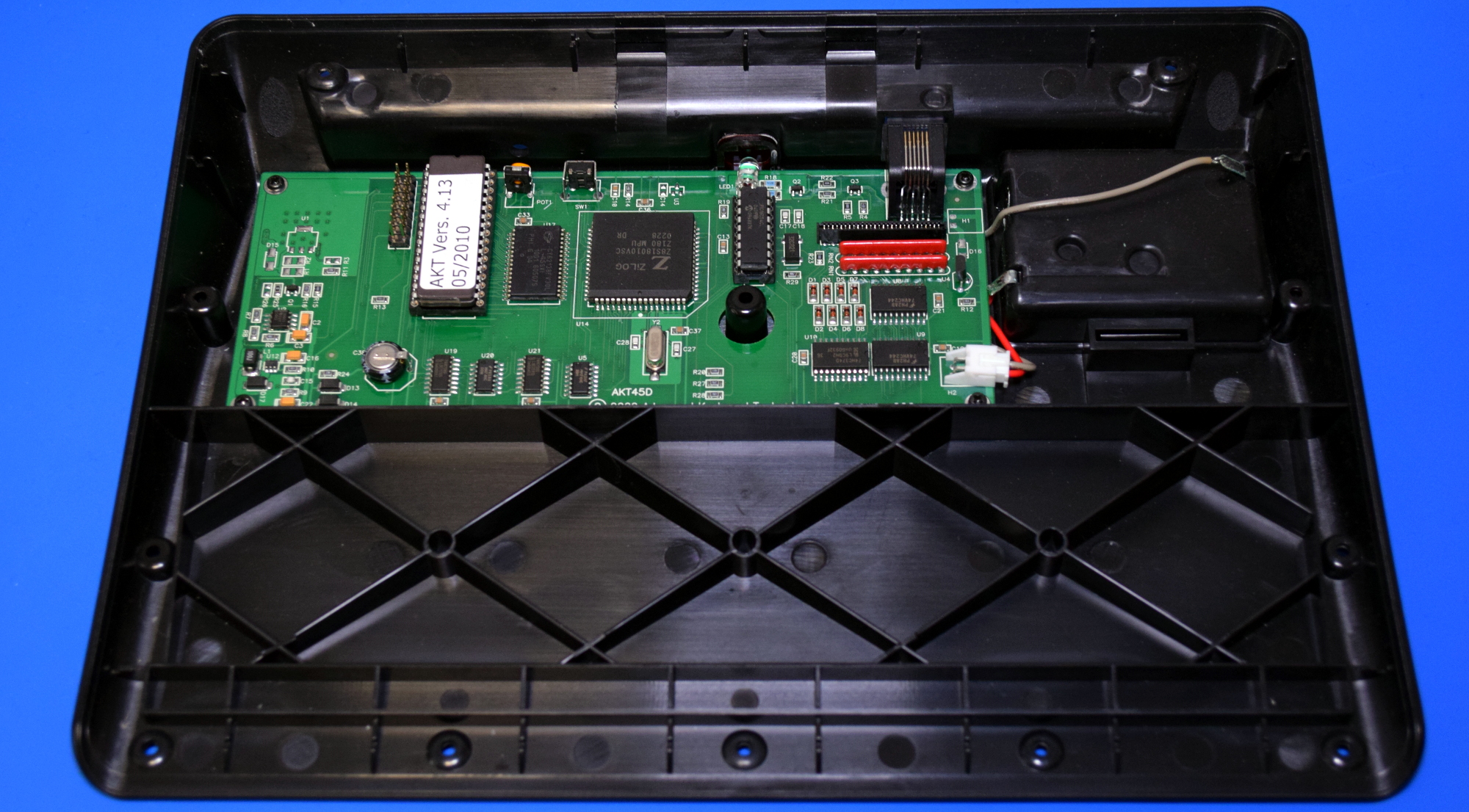 So it’s not much of a surprise to see how empty the gadget’s plastic case is. Beyond the aforementioned LCD and keyboard, all of the electronic components fit on a single 75 by 180 millimeter PCB. Incidentally, it should be said that the Writer’s overall dimensions are somewhat smaller than what the adult novelist might expect; designed primarily for use by pre-teens, the keyboard is approximately 90% scale. It’s by no means unusable for fully grown fingers, but it does feel a bit cramped.

When taking apart mass produced hardware, you will more often than not run into bespoke components that were built specifically for that application. When building tens or hundreds of thousands of units, it makes sense to spin up custom sub-assemblies that will save time and money in the long run. But occasionally you run into components that lowly tinkerers and hackers like us would not only recognize, but know how to interface with. 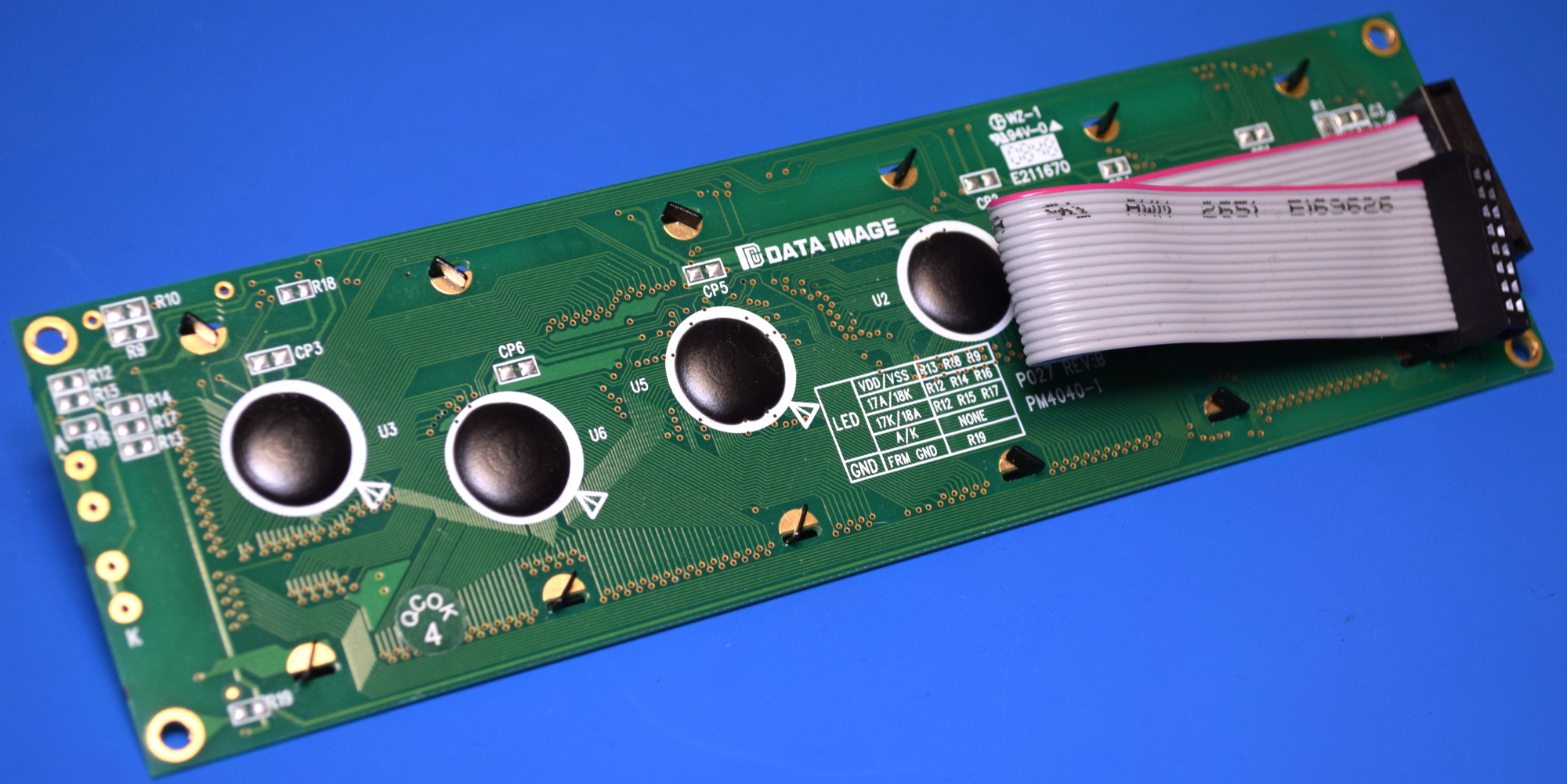 Case in point, the display used on the Writer. From the looks of it, this is a common 40×4 character LCD. The dimensions, mounting hole positions, and even pinout match eBay listings for contemporary modules. It would seem for an easy upgrade you could drop in a new LCD with a backlight, though you’d need to wire up the power for the LEDs separately since the pins aren’t connected on the Writer’s PCB.

Alternately, if you come across a stack of Writers and don’t know what to do with them, you could just salvage the LCDs. Considering how cheap Writers are going for on eBay, the screen itself is likely more valuable than the unit as a whole. Interestingly, we’ve since found out the same could be said for older radar detectors.

A Computer By Any Other Name

Up to this point we’ve been talking about the Writer and its ilk as alternatives to traditional computers. But that’s not technically accurate, as the Writer of course does have a microprocessor under the hood. Specifically a ZiLOG Z180, which is a low-power chip that maintains full backwards compatibility with the Z80. According to the datasheet, this chip draws just 10 µA in standby mode.

The Z180 is paired with a CY62138FV30 providing 2 Mbit of SRAM that has a maximum standby current of 5 µA. Between these two power-sipping chips, it’s not hard to see how the Writer manages to squeeze hundreds of hours out of standard alkaline batteries. In fact, it would appear that the 8 Mbit M27C801 EPROM that holds the Writer’s firmware actually consumes more energy than the rest of the diminutive computer combined. 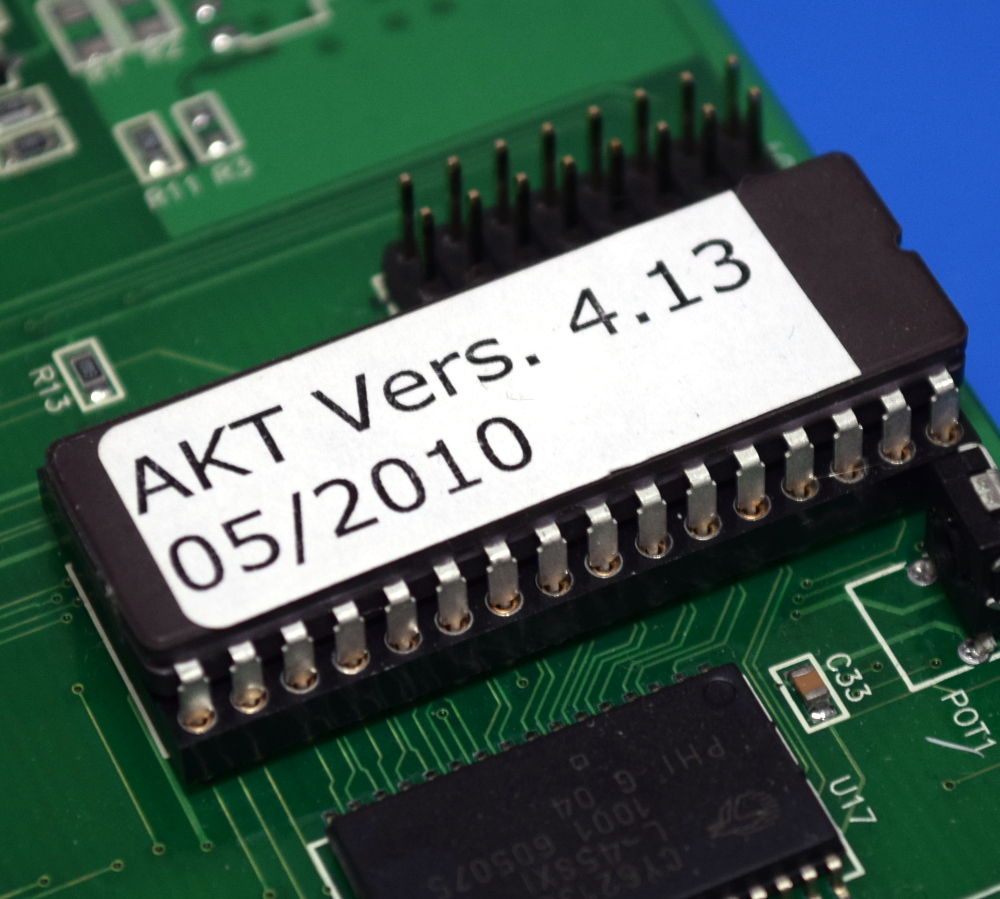 Speaking of which, the keen eyed reader might have spied a suspiciously recent date on the EPROM’s label. Despite the Writer displaying a copyright date of 2003 when booting up, this chip was flashed with version 4.13 of the firmware in May of 2010. While officially a decade into the past at this point, it’s still somewhat surprising to see they were manufacturing these devices for so long.

Looking through the Internet Archive, it seems that Advanced Keyboard Technologies (which alternately called themselves Writer Learning) was still selling the Writer as of November 2013; though at that point they were on clearance and selling for $99. The Writer was replaced with the considerably more capable Forte, but by 2016 the website appears to have gone dark and the company presumably folded.

I ended up with a Writer because I was looking for something cheap to give my daughter. It’s usually a safe bet that whatever device is put into her nine year old hands will end up being utterly destroyed, but since these were actually designed for younger operators, I thought they might stand a chance. Plus the price was certainly right; an eBay seller offered me four of them for just $8.

Of course, I soon realized why. To get the documents off of the Writer, the manual says you need to have a proprietary infrared receiver that mimics a USB Human Interface Device: just open up a text editor, hit the “Send to Computer” button the Writer, and watch as it “types” out the file character by character. Certainly sounds easy enough.

Unfortunately, the IR receivers are comparatively very rare. It seems that the Writer was almost always sold as part of a classroom kit that included four IR receivers and 30 word processors. That’s not to say they are completely unavailable, but unless you’re willing to buy the entire classroom pack from an eBay seller, you probably won’t be able to get one. So how do we get the data off of them without the special receiver?

Well to start with, it appears that IR transmission is handled by a dedicated PIC16C54C microcontroller instead of the Z180. Tapping into the communications between these two chips could conceivably allow for the data to be siphoned off by something like an ESP8266. Being able to pull documents from the Writer over WiFi would certainly be a compelling upgrade, especially if the device’s normal operation (and battery life) could remain intact.

Now logically you might assume that the Writer is mimicking a IR keyboard, but my experiments so far don’t seem to bear that out. Transmitting a file with a single character in it takes 15 seconds, while a file with 100 characters is blinked out in 16 seconds. Clearly a large amount of header and formatting data must be getting sent in addition to the text, it’s just not clear yet what it is. My next step will be to see if a standard IR receiver can demodulate the signal, and then run that through a logic analyzer to see if anything intelligible comes out the other end.

If somebody can figure out how to put together a receiver, all these cheap Writers on the second hand market would have a new lease on life instead of languishing around in storage. Sounds like a perfect challenge for the Hackaday community.